“Think of the children!” – Why I still believe in AXANAR! 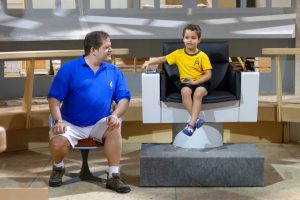 My other blog Fan Film Factor has sorta become an unofficial meeting ground where Axanar supporters can get together, kick back, relax, and then tear into each other like rabid dogs.

Actually, we try to keep it mostly civil (with varying amounts of success and failure), but once every so often, a post comes along that just gets me a’typin’ and speakin’ my mind!

Such a comment came in early Friday morning from a detractor by the name of JO MOINE.  I had published a blog on Wednesday providing coverage of the recent donor memo issued by AXANAR PRODUCTIONS outlining their future plans and finally releasing their financial statement.  While some of the detractor comments were (not surprisingly) snarky, Jo Moine took it one step further.  She wrote:

Somehow that doesn’t make me feel any better. Can’t actually put my finger on why, though. Oh wait – Alec blew $1.4 million with little to show for it, and is asking for more money. Why would anyone think he would manage more money wisely at this point? If you are thinking of giving him more, Jonathan – please don’t. Think of the children!

“Think of the children!” she said.  Perhaps the comment was simply meant to be flippant, but having a six-year-old son myself, I seldom take any call to “think of the children” lightly.  And so I took a good, long look at myself…because what Jo was asking me to do had produced such a profoundly visceral reaction that I wondered why I felt so strongly.  Am I really just following a leader with my blinders on into financial oblivion?  Was I duped.  If I can’t justify my loyalty to this project and put the reasons into words, maybe I should just follow Jo’s advice…

So I asked myself: why am I still so loyal to Alec Peters?  Why am I and thousands of other Axanerds still so supportive of this project when there’s dozens and dozens of detractors out there badgering us to just walk away and belittling us almost constantly for refusing to do so?

It didn’t take long to come up with my answer.  And if you’ve been having any doubts of your own, or if you just want some reassurance that the detractors are, after all, completely wrong in their disdain for this project, this is what I wrote back to Jo Moine… 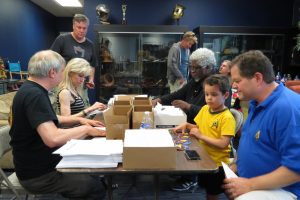 Jayden (almost five in this photo) helped the volunteers for hours sort patches into piles to pack into perk fulfillment envelopes. Note all eight of us crammed into the very small lobby of Ares Studios.

“Think of the children!”

My son loves Alec, Jo!  He let Jayden sit in the captain’s chair and play on the bridge and even gave him a toy to keep (some race car that was sitting on Alec’s desk that Jayden had started playing with during one of our visits; Jayden still has it).  Jayden is convinced that Alec is building the actual starship Enterprise (I tried to explain that it was the USS Ares), and he loves visiting the studio.  He had a blast sorting patches for the perk-packaging “party” we had back in July of 2015.

So when I donate more money to Axanar and Industry Studios, I am indeed thinking of the children…and also about the project itself.  AXANAR IS AWESOME!  Seriously.  I don’t care what you might think about Alec Peters; you can’t look at Prelude to Axanar with its nearly 3 million views and not acknowledge the incredible achievement it was that fans actually made this.

Were some of those fans also Hollywood professionals?  Sure.  But they were still FANS.  This wasn’t Star Trek by corporate committee.  This wasn’t negotiations with Chinese investors to make sure the new movie was full of explosions and motorcycle stunts to draw in bigger summer audiences.  This wasn’t a strategic business decision to leverage the popularity of the property into grass-roots support of a new subscription-based streaming video service for the network.

No, this was fans of Star Trek producing an amazing 20-minute film and then breaking all records on Kickstarter and Indiegogo in order to do it again even bigger and better.  Remember how exciting everything was BEFORE the lawsuit?

In terms of Trek fan films, 2014 and 2015 were amazing years full of hope and excitement–not just for Axanar but also STC, Renegades, New Voyages, Horizon, Farragut, Dark Armada, and many, many others.  Of course, Axanar was right there in the forefront…and it was so energizing and engaging (“Energize!” “Engage!”) to be a part of that movement.  As a fan, I hadn’t been this excited about Star Trek for years…and certainly not about anything coming from the studios.

So if you or anyone wonders why I have such loyalty and admiration for Alec Peters, Jo, it isn’t just for Alec Peters…it’s for ALL of Axanar, the team behind it, and everything they’ve accomplished so far.

Alec Peters didn’t “blow” $1.4 million.  That much is obvious to all of us except for a tiny few who keep trying to ignore the reality of real, physical things.  The studio itself looks amazing–an incredible transformation from what it looked like when I first walked in and saw everyone’s desks crammed into the small lobby (because no other offices were ready yet) and an echo-producing, hard concrete floor in an empty warehouse. 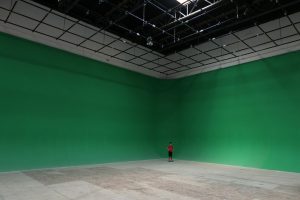 The super-sized Axanar green screen. Behold a marvel in the corner…

Now there’s offices, a three-layer sound-absorbing studio floor suitable for bracing sets to, a green screen wall the size of a basketball court, special track lighting and a powerful electrical grid, state of the art digital editing hardware and software, and a host of other useful resources.  The only thing still left to do is complete the sound-proofing, although the studio is still pretty sound-proofed with the floor and those tremendous elephant doors they built to cover up the noisy sliding metal door at the back loading dock.

This facility is 90+% complete using donor money.  Nobody “blew” anything.  The bridge set needs some final painting, and then TOS fan filmmakers will have one of the most amazing standing sets to film on–the only TOS bridge set west of the Rockies and the only one anywhere built on casters so the modules can be rolled in and out for different filming angles.  It really is an incredible set…and a very impressive studio!  Money was spent wisely and on the right things.

As a donor, I couldn’t be more proud.  And I’m also proud that Alec Peters stood up for himself and for all of us who supported Axanar through more than a year of litigation.  And I am ecstatic that he managed to get as much as he did in the settlement–allowing Axanar to actually get made (minus 60 minutes, unfortunately, but still featuring the original surviving cast) and also getting to keep this amazing studio.

Those of us who have “drunk this KoolAid” have now realized that it’s not poisoned after all…and it’s delicious!  Axanar and its fan base are still here, and we’re psyched!  The Axanar website got 72,000 unique visits during the month of February.  Compare that number to the hyper-critical  Axamonitor.com, which got barely 6.5% of that amount (4,700 visits) in the same month.  Heck, even Fan Film Factor in that time got nearly 20,000 visits.  The numbers are obviously on the side of the Axanerds! 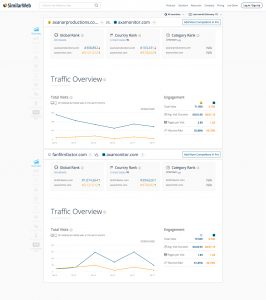 Click to enlarge these comparative stats for February from SimilarWeb.com (Axamonitor’s numbers and graph line are colored orange).

So yes, the “Axanar faithful” are still faithful and more than ready to mobilize.  We’ve been waiting for our chance to donate again…not because we think Alec Peters will blow our money on sushi and car tires but because we are confident that our money will go into creating something great, something that excites us in a way Star Trek itself just hasn’t managed to do in recent years.

Has Axanar had its fair share of speed-bumps along the way (like a multi-million dollar, year-long lawsuit)?  Of course, it has.  Much of what was being attempted by Alec and his team (and by all other fan productions before 2016) happened in completely uncharted waters, so even without a lawsuit, “stuff” was bound to happen.  And hey, even Star Trek: Discovery has had its fair share of speed-bumps and its own delays…and it’s a 100% professional production!

The fact is that, no matter what headwinds have hit over the past 14 months, Axanar is still the uber-cool fan project that I fell in love with.  And not just for us donors, but for the “children” as well.  And I’m not just talking about my six-year-old son.  Part of Industry Studios’ ongoing mission will be to help young producers create their projects.  Student filmmakers will be able to use the resources of Industry Studios at a fraction of the cost of other facilities.  Heck, maybe Jayden will someday be one of those film school students!  I have a friend who was also an Axanar donor who has three children (the older two already teenagers), and the middle child is getting interested in film-making.  Axanar Productions intends to use volunteers.  What a great way for my friend’s son to get some hands-on experience on an actual set in a real studio.  In fact, in a few years, my own son Jayden might be old enough to help out, too.  How awesome would that be? 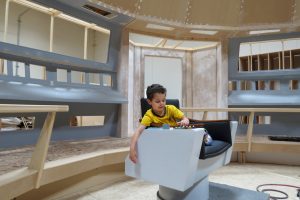 This was back in July of 2015. The bridge looks SOOOO much better now!

So, yes, Jo Moine, I AM thinking of the children.  And that is precisely why I will be donating once again to Axanar just as soon as I am given the opportunity…whether to the Kickstarter for funding studio expenses or privately to fund production of Project: AXANAR.

And I’d like to thank you, Jo, for giving me both the opportunity and a reason to look inside myself and really explore WHY it is that still believe so wholeheartedly in the project and the people behind it.  And I’m glad I could share my reasons with you.