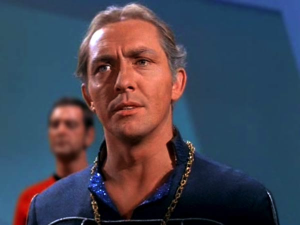 The story of Garth of Izar, a character only seen in one episode of the original Star Trek, is one writer/producer Alec Peters first wrote 20 years ago.  It wasn’t until 2010, after playing Garth in the well known Star Trek: New Voyages fan film, did Alec turn the story into a screenplay.

A veteran entrepreneur and a 2004 Ernst & Young Entrepreneur of the Year winner, Alec decided that if he was going to make Axanar, it needed to look like a real film.  So in March of 2014 Alec raised $101,000 on Kickstarter, assembled a team of Hollywood professionals, hired well known Star Trek actors, and produced Prelude to Axanar, a short film that went on to win 46 film festival awards world-wide.

Based on the enormous success of Prelude to Axanar,  the Axanar team went on to raise over $1.2M to make a full length movie of Axanar, and released their first scene in summer of 2015.  “The Vulcan Scene” was so good, it prompted CBS and Paramount to sue Axanar to prevent the movie from being made.  Alec was able to retain the services of Winston & Strawn, one of the top IP litigation firms in the US to represent Axanar pro-bono, and after a grueling 13 months of litigation, CBS and Paramount finally settled, allowing two more episodes of Axanar to be made.

Axanar is beloved by Star Trek fans who want to see something new and innovative, yet which honors the Star Trek they grew up on.  With over 4 million views on YouTube and an unheard of 99% thumbs up rating, Axanar has shown that there is a huge appetite for Star Trek that honors canon, is original, and yet professionally made.

Pre-production is well underway and Axanar is scheduled to begin filming in Atalnta in October of 2019 with a tentative release at San Diego Comic Con in summer 2020!

If you are interested in learning more, you can read our FAQ or check out our production’s Facebook page.