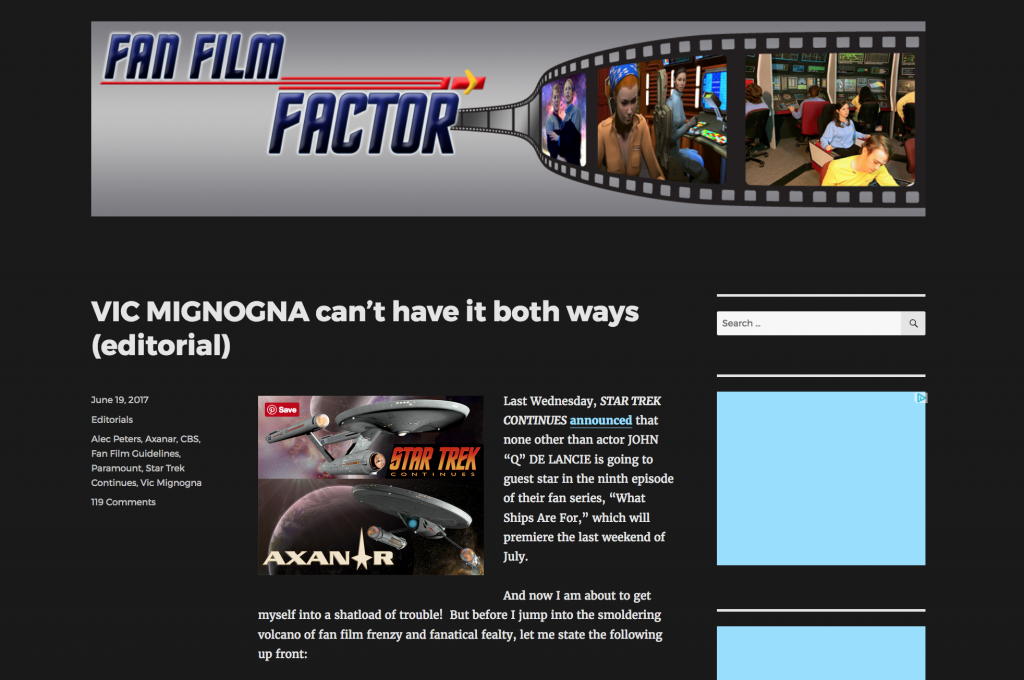 There is a a lot of talk lately about how Star Trek Continues has decided to openly violate the Star Trek Fan Film Guidelines that CBS put in place last year. STC has already violated the guidelines with the release of their last episode, and is making 3 more roughly 50 minute episodes that violate at least 5 Guidelines including length (close to 50 minutes) and the use of Star Trek actors.

I would highly recommend you read Jonathan Lane’s Fan Film Factor article on the matter here:

Jonathan provides a very fair view of the matter, as he likes both Axanar and STC.  And Jonathan calls out Vic for his hypocrisy in attacking Axanar for violating “guidelines” that never existed, while violating the actual written rules himself.  And lets be clear, Star Trek Continues has neither been “grandfathered” in (total nonsense), nor do they have a special deal with CBS.  They are simply stating that “we think CBS will be OK with us doing this.”

But I am going to argue that this is actually good for fan films.

Now let’s be clear, I don’t like Vic.  He has been lying about Axanar since he stormed out of the Prelude to Axanar Premier we invited him to in 2014.  But I support Star Trek Continues as I do all fan films.  I don’t let my feelings for Vic cloud my feelings for a very worthy fan film series.  Along with Star Trek New Voyages, they have done wonderful things in the fan film genre.

Now what is ironic is that while Vic refuses to help anyone else in fan films, (he famously asked Tommy Kraft for a role in the Horizon sequel while telling Tommy he wouldn’t lift a finger to help him) and has refused to allow others to use his sets (unlike James Cawley or Starbase Studios who generously allowed anyone to come use their sets), Vic’s decision to ignore the Star Trek Fan Film Guidelines may well help all fan films moving forward.  How is that?

Well, CBS always hated policing fan films.  Having communicated extensively with with John Van Citters, (Head of Star Trek licensing),  Liz Kolodner (VP CBS Licensing) and Bill Burke (VP CBS Consumer Products) about fan films for years, and having advocated extensively for guidelines, I knew that CBS didn’t WANT to have to worry about fan films as they saw it as a huge waste of time.  They were too busy making money to have to worry about a bunch of fans making films.  I once joked with John Van Citters that CBS treated fan films with “benign neglect” and that was good, as fan films did nothing but help the franchise.  And CBS told me over and over how it would be impossible to come up with fan film guidelines because of 50 years of Star Trek contracts and agreements with unions, guilds and actors.

Well, clearly that wasn’t the case, since they were able to come up with Guidelines pretty quickly after they sued Axanar.  And while many feel the guidelines are too severe (e.g. limiting fan films to 15 minutes and no more than two installments) or even possibly illegal (it’s questionable if CBS can tell you who you CAN’T hire for your fan film) – the guidelines are what they are. They provide some general rules to follow if a Star Trek fan film producer doesn’t want to run the risk of getting sued by CBS.

So how does Star Trek Continues violating the Star Trek Fan Film Guidelines help all fan films?  Well, it just supports what we at Axanar have known for a while.  Axanar was sued because we didn’t look like a fan film.  Not because we made “profit” (we didn’t) or that we built a “for-profit studio” (we didn’t…STNV did that), both reasons made up by people who don’t know what they are talking about, but because Axanar looked like it came from the studio.

Now CBS doesn’t want to sue its fans again.  The 13 months of the lawsuit was not good for CBS and Paramount from a PR perspective.  And the Guidelines were basically a way to put a lid on the “arms race” of professionalism taking place.

But what we see here is CBS giving Star Trek Continues a pass.  And why?  Because over a year ago, CBS said to me “No one is going to confuse them with real Star Trek“.   And that is the crux of the matter.  Yes, Star Trek Continues, like Star Trek New Voyages, have excellent production values, with amazing sets, brilliant VFX and visuals, and excellent costuming and props.  They LOOK amazing.  But the acting is mostly amateurs, and that is the main reason fan films don’t have widespread appeal. (By the way, I love Chris Doohan as Scotty in STC.  Simply brilliant).  But ask fans what they think of fan films, and the overwhelming # 1 reason they give for not watching or liking them is the acting.  And this is one of the main reasons I decided to give up the role of Garth in the feature film.

So, as long as you aren’t too good – and stay in familiar territory – it appears you are in a safe harbor.  Want to break the Star Trek Fan Film Guidelines? Just don’t make something that CBS perceives as a threat.  There’s no question that from a marketing perspective, fan films are actually very good for the Star Trek franchise, and the powers that be at CBS know this and will allow you to break many of the guidelines as long as you aren’t overly ambitious.  And since no one is really raising money for their productions anymore, I don’t think CBS has to worry about this.  STC is spending the money they had previously raised and why they cut down on the number of episodes they were making.

Also, by allowing Star Trek Continues to ignore the guidelines, CBS is basically admitting that this is not a problem for them and they would have a very hard time claiming damages in any future legal action.  Sure they could selectively sue anyone they want, there is no bar to suing one party if you have ignored others as in trademark litigation.  But arguing that one fan film harms CBS while another doesn’t is a much harder proposition. And hopefully by now CBS has learned to pick up the phone rather than file a lawsuit and incur over $ 1M in legal fees.

So, while I won’t advocate a fan film maker break the CBS Star Trek Fan Film Guidelines, I think what Star Trek Continues has shown, is that CBS isn’t going to worry about a product that they don’t see as threatening.  And that gives all fan film makers a little breathing room.