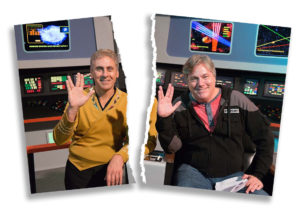 I really hate it when people take something private and explode it on social media.

Unfortunately, Robert Meyer Burnett has elected to do just that rather than working with me privately to solve issues regarding Axanar work he was paid for and never delivered, Axanar equipment and digital assets he refuses to return, and over $30,000 in loans I made to him while working on Axanar. With Rob using social media to attack me rather than settle our dispute, I feel the need to set the record straight.

Rob himself was actually one of the most dedicated supporters of Axanar (and of me) from 2014 through 2017. He edited Prelude, directed the Vulcan Scene, was scheduled to direct the full Axanar production and, after the settlement, the two 15-minute sequels. He stuck with me through a year-long lawsuit, and in dozens of podcasts, Rob said countless positive things about the project, our supporters, and me. And he hated the haters.

Rob and I were buddies, teammates, soldiers fighting in a war against two multi-billion corporations. And that is why I feel so betrayed right now.

Rob was my friend and, during the time that he worked on Axanar, I loaned him over $30,000 to help him make ends meet. This included more than $14,000 I loaned him for a car so he would have transportation after his old car died. Does that seem excessive? Not to me. When my friends fall on hard times, I try to help them out. And Rob assured me that he’d pay me back every penny he owed me. Sure, we never signed a formal loan agreement. We were friends, for heavens sake! But it was always understood by both of us that I was lending Rob money to live on and to travel to and from the studio to work on Axanar and anywhere else he needed to go.  Heck, Rob even said publicly in one of his recent videos that I lent him money.  That fact isn’t even in question.

Perhaps I should have seen a red flag when, without telling me, Rob took out a title loan on the vehicle, which is highly unethical since I was technically the note-holder on the car. Because of Rob’s irresponsibility, that car was repossessed three times. I bailed it out the first two, but he ultimately lost the car because he had no money to get it back the third time, and I was done with his irresponsibility at this point.

Rob was paid over $20,000 during the fall of 2015 to work on the Axanar feature and to produce the “Heroes” vignette (the short we filmed on the New Voyages sets, where a cured Garth returns to the Enterprise). Despite being paid, Rob never delivered it.  He was also paid $5,000 to produce our “Origins” disk in 2016, which he never delivered either.  Rob now claims that his time was worth more that that.  Hey, so was mine!  But we were in the trenches, and that was the amount Rob agreed to be paid for this work.  I took him at his word.

Things began heading downhill in 2017 when Rob not only refused to do the work he was already paid for but also refused to return over $10,000 worth of Axanar equipment and all of our digital assets! Hours of raw footage had been stored on two RAID array hard drives supplied by Other World Computing. These are special high capacity drives that are used by film editors. Rob claims that he copied the files to other drives and left them in my office before the move to Georgia. Not only did I not get them, but the RAID arrays are expensive and Axanar property.

But that shouldn’t be a problem, right? Rob still has all of the footage on those two RAID array hard drives. He can just hand them over, right? Heck, Jonathan Lane even volunteered to drive over to Rob’s house in Pasadena, pick them up, and mail them himself. Rob refused.

Rob claimed he needed the hard drives and computers for his work. I’m not heartless. I understood that Rob still has to make a living. So I arranged to have OWC, our sponsor, give us a brand new RAID array so Rob could keep one for his own use. I even said I would forgive his $30,000 debt if he would finish the work he was paid for and return our equipment. Rob refused this deal, too.

Then a mutual friend loaned Rob $13,000 to buy a new computer so he could return all of our equipment. Rob took the money, bought new equipment, and still refused to return our RAID array hard drives!

Do you see a pattern developing here?  Can you understand why I’ve been so frustrated?

Rob has never offered to pay back a dime of what he owes, let alone return the equipment and footage that was paid for by donors. But putting that aside, Rob’s actions have hurt Axanar and our donors by failing to deliver what he was paid to produce, and failing to return our digital assets so we can continue work on Axanar without him. I feel as though he is holding part of Axanar hostage, and for the life of me, I can’t understand why.

I was really hoping I could avoid having to file an actual lawsuit, and I offered Rob a settlement where all he had to do was just return our digital assets.  Just that.  We would both agree to not talk about or disparage the other and simply go our separate ways.  I would completely forgive the $30,000 he owed me, the $5,000 he took for the “Origins” Blu-ray he never delivered, and I would even let Rob keep all the equipment.  Just copy the digital assets that belonged to Axanar fans and ship them to me.  I’d even be willing to pay the postage.  Hey, I’d even pay for the hard drives he needed to copy the files if it meant getting our digital assets back in our possession.  I mean, who wouldn’t take that deal, right?

The reason I was willing to cancel Rob’s debt and let him keep the equipment is because all I really wanted was the footage he was refusing to part with.  I truly hoped that all of our issues could be settled quickly and cleanly, privately, and without having to fight our battles both in the courtroom and on social media.  Rob refused…again.  All he had to do was copy some digital files and send them to me — the most generous offer anyone could hope for — and Rob said “no.”

So I filed a lawsuit.  I hear Rob, who has little income of his own, borrowed $20,000 from his mother to hire a lawyer.  Rob’s lawyers filed a response and are challenging jurisdiction of the GA court.  Even if the court finds that I need to file the claim in CA court, I will, and that will cost Rob more.

In the end, Rob will have spent $50,000 or so on legal fees and owe me for everything I claim as my case is iron-clad and documented, and no judge or jury will side with Rob. Court cases are decided based on evidence, not pontificating on YouTube.  Rob will also owe me legal fees.  So in the end, this case will cost Rob over $100,000.

And he could have gotten away for NOTHING if he just returned our digital assets.   But like an irrational child throwing a tantrum, he refused.

I will not let Rob Burnett hold me and the Axanar donors hostage.  This is simply too important.