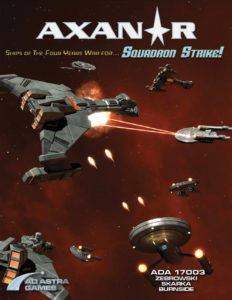 There’s been a lot going on in the world of Axanar lately,  including the launch of Ares Digital 3.0, preparations for the first shoot in October, bringing on a line producer and director of photography, adding the finishing touches to the bridge set, having the rent for the studio lowered so there doesn’t need to be a move, receiving all of “The Cage”-era tunics from Italy, getting the Four Years War-era uniforms into the manufacturing pipeline, and starting to cast the various roles. And all of that doesn’t even include the release of the latest Axanar comic book “Stardate 2245.1” or the current GoFundMe for the Axanar Universe fan film INTERLUDE.

But almost forgotten in all of that news was the release last month of the latest supplement for the SQUADRON STRIKE! board game…a supplement based entirely on Axanar! Created by KEN BURNSIDE of Ad Astra Games, this new supplement features the characters and ships seen in PRELUDE TO AXANAR, caught up in space battle action and fun gameplay.

The game is available for purchase as a core product selling for $74.95 (you can order it here) with multiple supplements available for sale covering a wide array of sci-fi universes with different ships, characters, and storylines. The latest supplement features Axanar and sells for an additional $37.95 (order it here).

Now, you might be wondering if this game is licensed, and if so, licensed from whom: CBS or Axanar Productions…or both…or neither? An excellent question! And it’s one of the many asked of Ken Burnside in the following audio interview with JONATHAN LANE of Fan Film Factor.  Definitely worth a listen…