In Squadron Strike, Axanar’s photon torpedoes are missiles, in a universe where there aren’t interceptor weapons capable of shooting them down. A missile is launched on one turn, aimed at the target’s End of Turn tent, and impacts on the next turn after the target has moved.

Without interceptor weapons, missiles hit a lot. In Axanar, they have the limiter Avoidable, which gives a penalty to accuracy based on how far the target has moved perpendicular to the course of travel. This has two effects: First, it makes photon torpedoes much less accurate at close range, where a target doesn’t have to move as far (in hexes) to build up a significant accuracy penalty for the photon torpedo.

Photon torpedoes also have the Ignores Deflection trait. All of the larger ships in Axanar have deflector shields, which are hardened against damage; if you hit a shield with 4 deflection with 3 damage, you don’t hurt it at all. This means that when a photon hits a shield, it’s likely to go down…fast! 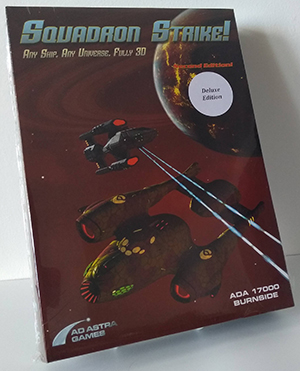 Next, we defined the Federation mystery weapon, which got named pulse cannons. They fire every other turn, but fire three times on the turns they can fire. They also have an Unreliablity limiter, which explains why the Federation was desperate to replace them. Every time you fire one of them, if you fail the Unreliablity test, the remaining shots are lost. If you get all three shots off, the weapon is accurate, has very swingy damage, and can mess up someone’s day.

If you have bad dice luck, you’ll want to replace them with the Type I phaser that the Federation bought from the Andorians and hastily refitted on everything that could handle them.

That led us to building the Type I Phaser, which had to be the same size (in hull spaces) as the Pulse Cannon. It became a fairly straightforward beam weapon, and got an overload function out to range 4. At close range, these things are murderous, and they still outrange the Klingon light disruptor.

The bread and butter weapon of the Klingons is the light disruptor, which has the High Impact trait (giving it bonus damage when Accuracy rolls are high)and Continuous (which allows it to fire again if the accuracy roll is a 9 or 10 on a ten-sided die.) In the second video in the last post, I was getting my butt kicked because my opponent kept on rolling 9s and 10s with their disruptors — doing nearly maximum damage and getting to shoot again!

The Type II phaser was something the Federation built off of reverse engineering the Type I phaser, and was first mounted on the Loki-class. Four were built before the weapon was finalized and put into general production, and the Lokis, much to the dismay of their captains, saw combat against the Klingons. The Type II phaser is a longer ranged, and higher damage version of the Type I phaser, and provides most of the firepower on the Ares-class.

Much like the Federation, the Klingons have a heavier version of their disruptor, known prosaicly as the heavy disruptor. It triggers the Continuous trait on an 8+, is longer ranged, and does a bit more damage per shot.

On the D6 and D7 classes, the Klingons mounted advanced disruptors, which have half the fire rate, are longer ranged still, and have the Bursting trait, which makes them more effective at damaging ships once the shields are down. Think of advanced disruptors as finishing weapons — always fire them last and into a down shield. 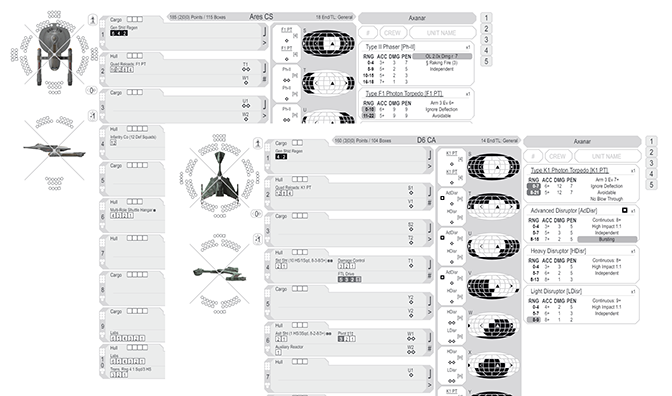 What this means in play is that there’s a lot of variety in matchups depending on when in the war your fight takes place. Most Federation ships replaced their pulse cannons with phaser Is by the midpoint of the war, but not all of them did. While the Klingons fight with the same weapons, their tactical doctrine has to change as Federation phasers improve through the war; their early advantages in firepower get more than evened out.

By the time the D7 faces a Constitution class, you can see that the D7 is the epitome of the prior generation of Klingon warships: It’s built around overcoming known limitations and doctrinal shortcomings. It’s durable, it’s tough, it’s fearsome.

As you can see, the Constitution-class is the first generation of something completely different. It represents a break-point in naval architecture, and the first time the Federation had a clear technological advantage that translated into invalidating opponent tactical doctrine.

By the time of the Original Series, the Ares class ships were mothballed; the design decisions meant to get them into service *now* meant that they weren’t especially maintainable designs. The Federation, confident in their technological superiority, only built twelve Constitution-class ships over the next twenty years, and that confidence shows in nearly every action we see on screen.

If you want to see how the ships of Axanar fly, come see me in the dealer’s hall of AxaCon/SphinxCon. I should have copies for sale there, as well as the Squadron Strike base game.