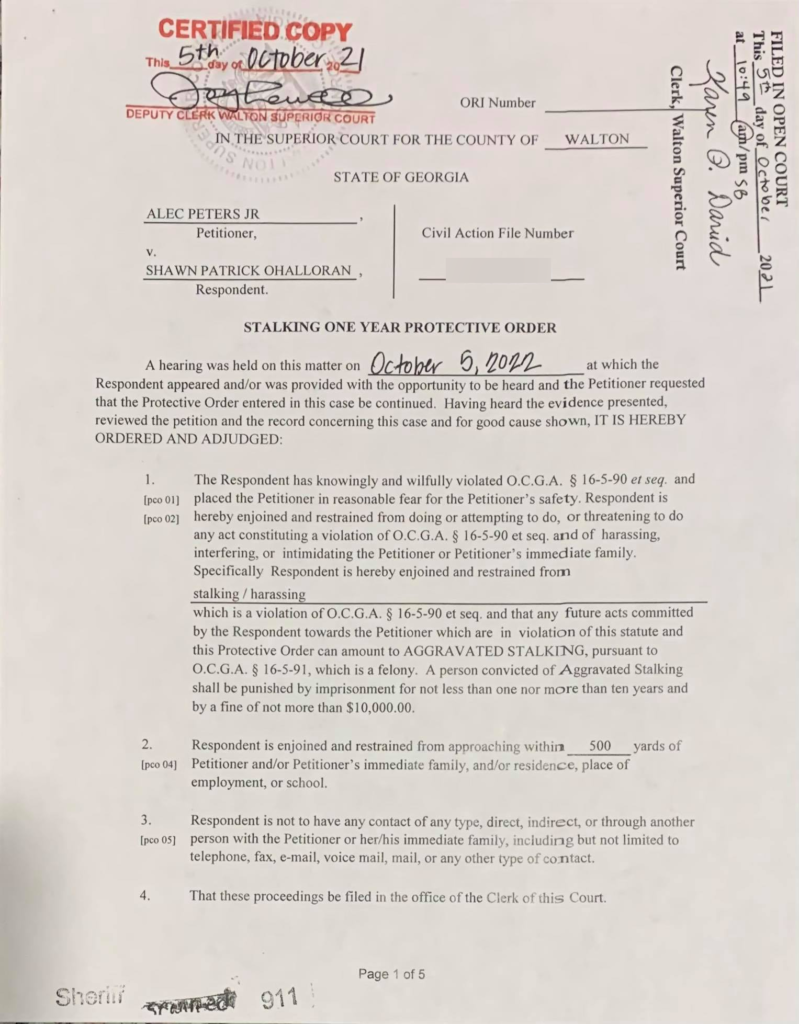 Last week, on October 5th, 2021, a Georgia Superior Court judge found Shawn O’Halloran had stalked Axanar creator Alec Peters, and issued a Protective Order that prohibits Shawn from any type of contact with Alec Peters. Alec had previously gotten a Temporary Protective Order against Shawn after Shawn assaulted Alec at Dragon Con on September 5th.  The judge’s order yesterday made the temporary order permanent for the period of one year.

Shawn had flown into Atlanta during Dragon Con the first weekend in September, with the purpose of creating an incident with Alec Peters.  In court, Shawn admitted to this, though he tried to claim his purpose for coming to Atlanta was to volunteer for Paul Jenkins, the former director of Axanar who was fired for unprofessional and inappropriate conduct in June, 2020.  There is ample evidence that Paul and Shawn have been conspiring over the past years on ways to humiliate Alec and destroy his reputation, and the judge found that Shawn had clearly stepped over the line.

Shawn flew in from Las Vegas to defend against the Protective Order, presumably so he could continue his pathological obsession stalking and attacking Alec.  He hired a lawyer, but that lawyer seemed unprepared for the case at hand.  Alec meanwhile, was well prepared with a binder full of documents and presented Shawn’s own Facebook posts as evidence against him.  After 6 years of harassment, there was a lot to show, but Alec only needed to present evidence from the last year to show a pattern of deranged rants that lead to the incident at Dragon Con, where Shawn assaulted Alec.

During his examination by his lawyer, Shawn admitted that he provoked a confrontation with Alec to embarrass him.  He also exposed Dean Newbury, (who has already admitted to stealing from Alec when he was Alec’s employee) as the other “unidentified” videographer recording the incident at Dragon Con, implicating Dean as a co-conspirator, as Dean and Shawn are close friends and have often worked together to pile on Alec using social media.

Shawn had even posted on Facebook how he stalked Alec at the Las Vegas con, a piece of evidence that Alec introduced, giving a copy to the judge.  The posts clearly show Alec doing everything possible to avoid interacting with Shawn while Shawn repeated tries to childishly provoke a direct confrontation.  Here were two of the most damning of Shawn’s hundreds of posts: 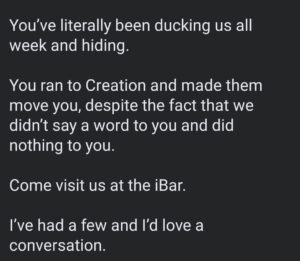 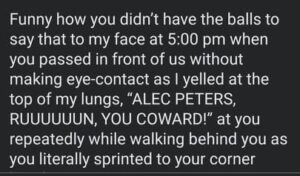 Observers in the court room said the judge seemed convinced early after Alec’s presentation.  And Shawn’s lawyer did nothing to help his case as he attempted and was shot down by the judge on several attempts to rationalize Shawn’s behavior when it was his turn to present. Shawn’s lawyer tried to bring up typical list of bogus talking points, like “where did the Axanar money go, are you a lawyer, you committed fraud”, etc., but the judge dismissed all of the desperate posturing as irrelevant to Shawn’s stalking/behavior.

It appeared that Shawn’s lawyer was unprepared, and he even admitted to the judge he had little time to prepare for the hearing. In addition, Alec has had plenty of experience being deposed, and the lawyer wasn’t able to get any purchase in his questioning of Alec.  He made several attempts to justify Shawn’s actions, all of which failed:

This has been a hater trope recently, a baseless lie that Alec was disbarred after being sworn in to the North Carolina Bar in 1988.  Obviously Shawn told his lawyer to go after this, and when he did right out of the gate, Alec shot down the nonsense, explaining that after graduating from UNC Chapel Hill in 1987 and passing the bar exam and being sworn in to the North Carolina bar, he went to coach at USC and with the USA National team (where he won two national championships).  Rather than continue to pay for the annual bar fees, Alec chose to deactivate his membership in the NC bar.

2) Shawn was justified in attacking Alec because Alec called out the haters to “go 10 rounds in a ring”.

Alec introduced numerous posts by Shawn calling Alec a coward and provoking Alec to a confrontation.  Alec introduced evidence that he had continuously avoided Shawn to minimize any interaction (as any reasonable, mature adult).  However, Alec owned up to inviting the haters to “Go 10 rounds in a ring” but stressed “In a boxing ring.  I didn’t invite Shawn to assault me in public.”  Also, Alec’s comment never singled out Shawn specifically.

3) Shawn was justified in attacking Alec because Alec called his son “Hitler Youth” in a private message to someone.

This strategy failed miserably as Alec provided examples of Shawn indoctrinating his son in hate and reviewed Shawn’s son’s actions at the Las Vegas convention harassing Alec and the Axanar team at their booth.

This strategy failed as well,  as the above posts by Shawn show that he did in fact direct his actions at Alec.

5)  Quoting Cases with no relevance

Shawn’s attorney, in his summation, quoted a case where a poet sought a TPO against an online group and it was denied.  But this was not the case here, and why the lawyer even brought this case up is bewildering.  Obviously, with such a poor case, he was grasping at straws.  The judge did not find this case relevant.

With the judge’s ruling that Shawn O’Halloran stalked Alec, a Protective Order has been issued, enjoining Shawn from all contact with Alec and requiring him to stay 500 yards away from Alec.  This order is applicable anywhere in the United States.

Georgia State Law 16-5-90 prohibits Shawn from contacting Alec in any way, including via computer networks, and also bars him from going through a third party to harass Alec. Even though Shawn has not been convicted under 16-5-90, the Protective Order clearly states that any violation of the PO automatically elevates a further stalking incident to aggravated stalking, which is a felony under 16-5-91, punishable by a minimum of one year in prison, up to ten years, and up to a $10,000 fine. The distinction is that the first offense is only a misdemeanor if convicted. Even though he wasn’t formally charged, the judge’s adjudication that he did violate 16-5-90 knowingly and willfully eliminates Shawn’s one “freebie misdemeanor” stalking and makes ANY further stalking he does a potential felony conviction.

In addition to the judge’s finding that Shawn willfully violated Georgia State Law 16-5-90, Shawn’s actions appear to have violated the Federal Anti-Stalking statute, since he confessed that he both communicated and traveled across state lines to execute his premeditated harassment of Alec. This has been reported to the FBI for further investigation. 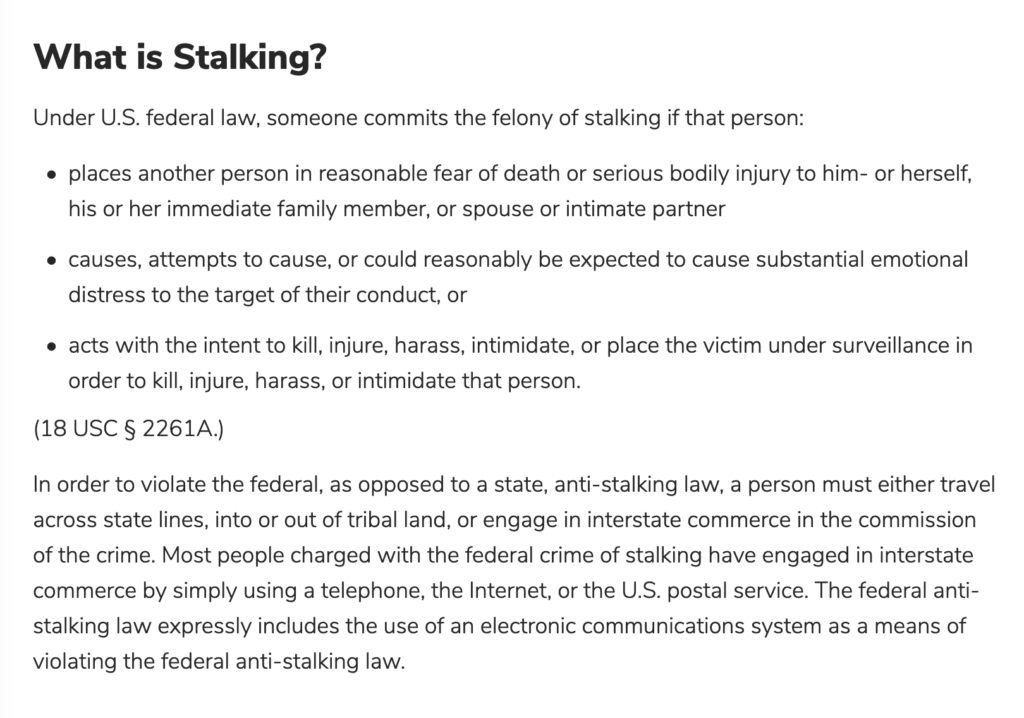 Alec and Crysstal thank everyone who has supported them.  rest assured we are taking extra steps to ensure our safety against Shawn and the rest of the Axamonitor hate group.