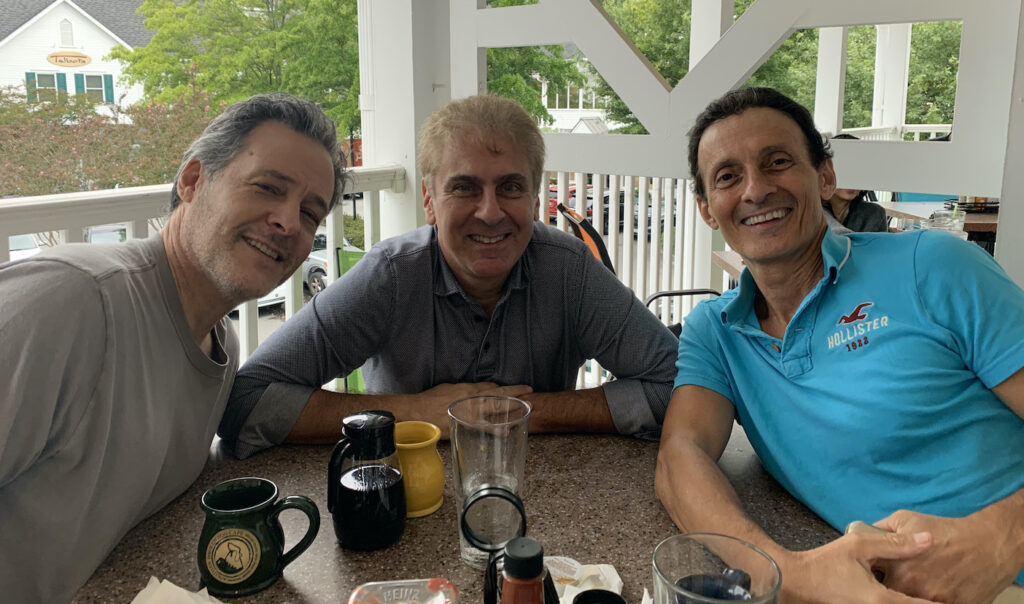 Last Wednesday, Axanar’s new director, Ted Brunetti, was visiting Atlanta, teaching at one of the top private schools in the area.  So he and Rob Pralgo, who portrays Robert April, and I had brunch at a local establishment.

Ted has been working in the industry for almost 40 years.  He studied with the legendary actor and author Uta Hagen, whose book, “Respect for Acting” is one of the most important books for actors.  Uta won a Tony award when she originated the role of Martha in the 1962 Broadway premiere of Who’s Afraid of Virginia Woolf?.  Ted becamse Uta’s right hand, and that experience lead Ted to being tapped to work as acting coach for George C. Scott and Jack Lemon for the TV movie of Inherit the Wind.  He was James Gandolfini’s acting coach and was tapped by producer Robert DeNiro, to appear on Broadway in Chazz Palmiteiri’s “A Bronx Tale”.

Rob Pralgo has previously worked with Ted, and credits Ted with some of the most important lessons he learned in acting.  And of course Rob portrayed Robert April in “Star Trek: First Frontier”, the full length movie fan film released last year.

The main topic of discussion was the upcoming November 20th film reshoot, which is three characters (April, Travis, Corax) on green screen.  The footage shot by Paul Jenkins in October was either lost by his producer Scott Conley or, in the case of JG Hertzler’s Sam Travis, just so bad as to be unusable.

Our previous directors all wanted to use Axanar as a springboard for their personal agendas.  We just want to make great Star Trek, and Ted is the perfect director to get great performances from our cast.  Great work is his goal, nothing more. He is a true professional.

Axanar editor/post production supervisor Mark Edward Lewis will be taking some of the responsibilities that a Director would normally handle, specifically working with the DP and making sure what we shoot looks like Prelude to Axanar.  Since he is editing the film, and worked on Prelude, Mark will be able to ensure a consistent look to the film.

We are excited about the coming shoot and we really feel we that we have not only significantly upgraded our team, but will be able to deliver a product in the quality that everyone expects from Axanar.