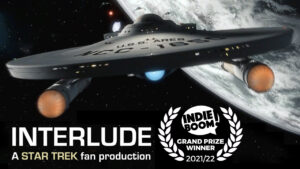 For the third time in the last five years, a Star Trek fan film has won the Grand Prize in the annual IndieBOOM! Film+Music Festival…and this year, the winner was my AXANAR Universe fan film INTERLUDE! The previous two winners were (in 2019) “The Equinox Effect” and (in 2020) “Mask“—both from THE FEDERATION FILES anthology series.

Actually, when I say “my” fan film, I really mean OUR fan film…because this was a labor of love and dedication from more than 50 people. And the two most important individuals in that group were my directors, VICTORIA FOX and JOSHUA IRWIN. Technically, Victoria was listed in the credits as “director” and Josh as “director of photography.” But as far as I’m concerned, they EACH deserve the highest accolades, which is why I submitted the film with both of their names listed—and here’s the official certificate that was just e-mailed to me yesterday… 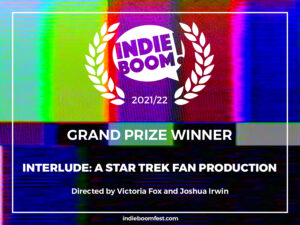 Although entered in the Fan Film category, Interlude received more views and viewing hours than any other selection in any category. I was told by IndieBOOM! festival co-founder ANTHONY DEVITO that Interlude was viewed more than 2,600 times for a total of 488 viewed hours! As such, it was elevated to Grand Prize winner, allowing another fan film, Stegosaurus: A Jurassic Park Fan Film (directed by BARRY WILKINSON from the UK) to win the Fan Film category.

Another notable winner was the the music video STAR TREK IS REAL, written and performed by ILIA “PIXI NEREID” McNEAL, star and producer of the AVALON UNIVERSE fan series, which took the title of Winning Original Song and scored Pixi a $250 prize…yay, Pixi!

Continuing the Star Trek strength in the festival, Trek anthology series The Federation Files took the award for Best Series.

And finally, my composer for Interlude, KEVIN CROXTON, won in the category for Best Musical with his James Bond-inspired fan film starring the 4th and 5th graders whom he teaches: IN THE BLINK OF AN EYE (which is an amazing film in its own right and something you should definitely take ten minutes out of your day to watch).

You can see all of this year’s winners here.

Now, some folks on Facebook have complained that choosing winners based on views and viewing hours turns IndieBOOM! into little more than a competition to see who has the most followers on social media and who can “turn out the vote” most effectively. Maybe so, but those are the rules. Other film festivals work differently, but IndieBOOM! has decided that this is the best way to let the viewers make their choices known. And so those of us who submit our films do what we can to reach out to friends, family, donors, fans, etc. and ask them to vote for us by viewing. ALEC PETERS helped, too, by sending an e-mail to the AXANAR donor list asking people to view ‘n vote…and several hundred (possibly more!) actually did.  Heck, maybe you viewed and voted for Interlude!  If so, my sincere thanks.  In that way, it’s kind of like crowd-funding: the more interest and support you can generate from people, the more successful you’ll be.

And speaking of crowd-funding, the Grand Prize Winner for the IndieBOOM! festival receives $500. As soon as it arrives, I am going to donate it directly to the Avalon Universe crowd-funder!

Why not just keep it for myself? A couple of reasons. First, Josh Irwin put so many hours into both the cinematography and the film editing of Interlude that he really deserves this prize money as much as I do. So why not split it? That brings me to the second reason. I’ve made my fan film. I’m done (at least for the foreseeable future). Josh is making more fan films RIGHT NOW. The money he raised last year went into producing AGENT OF NEW WORLDS. But Josh still needs about $7,500 for his next fan film(s), and $500 will take him and Team Avalon another 2.5% of the way there.

And maybe I can inspire some of you to donate as well…hmmmm? Every little bit helps, folks!