I helped Alec Peters get trim!

ALEC PETERS has been on the “Axanar diet,” having lost nearly 16 pounds over the past several weeks to get himself back in shape to play Captain Garth of Izar when filming starts up again.  I, on the other hand, am still rather rotund and not a good example to follow when it comes to losing weight.  So why is the title of this blog about me helping Alec get trim?

It’s a pun, people!  The “trim” I helped him get is intended for the rank braids on the sleeves of the Four Years War era tunics.

With Alec posting feverishly updates and videos and podcasts on all of the big things—like casting and bridge construction and shooting dates and locations—the “little details” are often glossed over.  Well, today, I want to tell you about one of those little details and the teamwork that went into making it happen.

You probably don’t think much about the braids on the sleeves of Captain Kirk or Mr. Spock.  In the same way, when you see Axanar and look at the rank braids on Garth’s sleeve or Travis’ sleeve or Leonov’s sleeve, you probably won’t give them much thought either.  But in fact, those braids required a lot of research by Alec, an hour of diving for me, and $7 for fifteen minutes of parking…among other things!  Here the story you won’t read anywhere else…

Last Thursday around 11:30am Pacific time, Alec texted me the following message:

“Can you make a trip downtown for me?  We need trim.  I would rather you go get and overnight for me than trust the guy.”

What he was referring to was the gold braid (called “trim”) he had found that he wanted for the Starfleet tunics.  He had a sample from a small shop in the Fashion District in Downtown Los Angeles.  He texted me an image of the trim he wanted along with the business card of the person he was working with…

Obviously, Alec could just order the material and have them overnight it to him.  But with the shoot only 8 days away (and the trim still needing to be sewn onto the tunics, which will arrive in Georgia about the same time), and Jonathan in Los Angeles anyway, why not make extra certain that everything is done right?  Of course, this meant me shlepping 30 minutes through traffic to downtown L.A. in the middle of the day.  However, I had already been planning to make the trip in order to shoot some B-roll footage of the tunics being manufactured—also in a factory near the Fashion District.  Unfortunately, we weren’t able to set up that visit in time (the tunics were finished early, before I could get there to film them being made!), but I’d still cleared my schedule for a trip downtown. 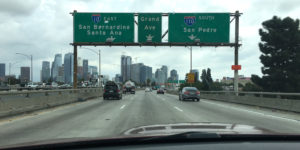 L.A.’s Fashion District is like nothing you’ve ever seen before!  Block after block after city block crammed with tiny shops selling everything you can imagine having to do with clothing and fabric—from suits to shoes to coats to belts to wedding dresses to prom dresses to bikinis and bathing suits to suitcases to exotic materials to leather to lace to silk to satin to polyester to, well, everything.  Obviously, if you work in Hollywood making costumes for TV and film, this area is probably your second home, and you have dozens and dozens of these shops on speed-dial.

Back in the days when Alec was prepping for the originally-planned Axanar shoot, he had walked through the Fashion District, stopping in every trim shop, and buying samples he liked.  Now, just a week away from shooting, it was time to finally buy the trim.  (Cuttin’ it pretty close there, Alec!)

Even though I’ve lived in L.A. since 1993, I’d never actually driven through the Fashion District…and with good reason!  The streets are tiny and crowded with people jaywalking across, often carrying large boxes or pushing giant carts or racks loaded with clothing items and not able to even see if a car is coming.  And oh, forget street parking!  Parking spaces disappeared a quarter mile before I reached my destination.  By the time I arrived, my only option was a $7 flat rate on the roof of a five-story building across the street.  Oh, well…at least Alec is paying, right?  (Forget the sushi…ask him about Jon’s parking!) 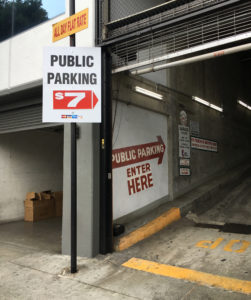 The store itself was very unassuming and sandwiched between numerous other assuming shops that looked just like it.  I spent a couple of minutes just walking up and down the sidewalk trying to find address numbers so I could pinpoint the right store.  Finally, I found it… 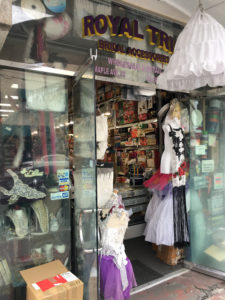 “Bridal accessories,” huh?  So Garth is going to a wedding!  No, wait.  Wedding trim is what the rank braids will be made from…I get it.  Kinda makes sense, now that I thought about it.  I went inside.

The store was cramped.  The aisles were narrow allowing for a staggering amount of product to be displayed.  Here’s the area where the Starfleet rank braid was being displayed (among other samples)… 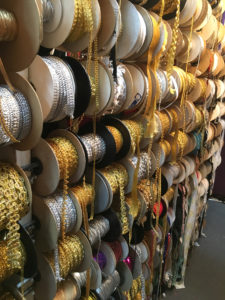 The elderly Persian couple who owned the shop greeted me.  (L.A. has a large Persian Jewish population who fled Iran in 1979 when the Shah was overthrown and replaced by the anti-Semitic Ayatollah and his Shia clerics.)  Sharzad, the wife, had already spoken to Alec and pulled out the two samples for me look at.

I thought I was just picking up Alec’s order, driving it to UPS, and shipping it to Lawrenceville.  Now I had to decide between samples?  Man, I prayed Alec answered his cell phone!  He did, and Sharzad held up two braid samples: a 1/2-inch and a 3/8″.  I took a photo and texted it to Alec.  (Man, what did the world ever do before smart phones???) 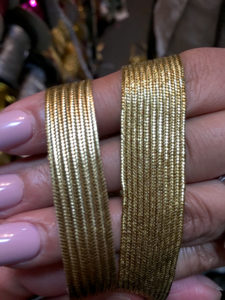 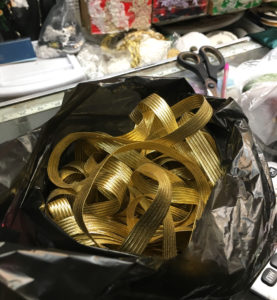 Next stop, after a drive back from Downtown: the UPS Store.  I stuffed the trim into a padded envelope, paid for 3-day shipping (Alec decided to save a few bucks, since the tunics would be en route at the same time), and headed to pick up my son from school.

Just a little teamwork, and now Garth can look like the captain he is!