With the dawn of a new year comes… updates!

Technically, there isn’t much new to report from Fulfillment HQ, so let’s just go over a few highlights for anyone who may have missed the last update, ok? (And I know you’re out there, because I keep answering emails with questions that were answered in previous updates, lol…) 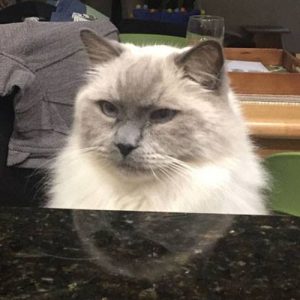 Ensign Boomer keeps a watchful eye (okay, two) on all Axanar proceedings, from Fulfillment on up…

PATCHES from the Axanar Kickstarter (the campaign which ended in August 2014) have shipped to those donors who made donations at levels that included patches… and will continue to ship, as stragglers who have not yet visited Ares Digital 2.0 to provide their current shipping addresses, do so. (If you haven’t finished setting up your account including your shipping info, we can’t ship the patches, so be sure to take care of that, pronto! It’s an easy-peasy setup, promise… 🙂 )

No other perks from the Axanar Kickstarter will be shipping, until such time as the Axanar project has been completed. (There’s a simple reason for that: almost all of the remaining perks require content from the finished AXANAR in order to be manufactured.)

And for those donors who made donations for Ares tunics, they are still in production. (Yes, we’re waiting with bated breath for ’em here, too..!)

As with the remainder of the Kickstarter rewards (discussed above), no other perks from the Indiegogo will be shipping until after the Axanar project has reached completion.

Still, there’s no time like the present to go in and setup/update your Ares Digital 2.0 account if you haven’t already done so, right?  (Don’t worry; it’s a simple process, and you’ll get to poke around the site a bit and see how spiffy it is!)

More updates as things come up, of course, but for now, that’s it from Fulfillment HQ…