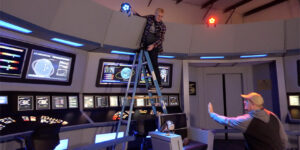 INTERLUDE is knocking on the door of a combined 75,000 views for “version 2.0.” You can watch it on the AXANAR YouTube channel or the AVALON UNIVERSE YouTube channel…or both!

A few weeks ago, I published a blog on Fan Film Factor looking at three scenes from Interlude that wound up on the digital “cutting room floor.” But one of the most talked about aspects of that blog was a clip that I included showing 18 minutes of the actual shoot itself…filming the stunning opening scene looking down from above onto the bridge with all sorts of activity going on. Fans of Axanar and ARES STUDIOS loved getting a glimpse into all of the action happening on that set.

Well, folks, there’s a LOT more where that came from…and I’m going to share it with you starting today!

As producer on Interlude, most of my job was done by the time we got to the weekend of our two-day shoot at Ares Studios on November 2-3, 2019. In addition to writing the script, I was in charge of budgeting, crowd-funding, paying for things that needed to be paid for (everything from chest emblem patches to camera and lens and light rental to hair and make-up supplies to renting chairs and tables to the caterer himself…plus about a hundred other little and not-so-little things!).

Another part of my job was to make sure we had the right people at the studio on the right days—actors, extras, production crew, even an on-site medic—that they knew where to be and when and that their gas, travel, food and lodging was paid for if/when necessary. My efforts were designed to make it possible for VICTORIA FOX, JOSHUA IRWIN, and the entire amazing Interlude production team to shoot the scenes of our fan film over two 10-hour days with everything they needed ready and waiting for them.

In short, I was the guy setting up the buffet table so all of the guests could have a good time at the party. So once the party got started, what was left for me to do?

Well, there were still some minor fires that needed putting our during those two days—figuring out where to put the hair and make-up people, handing my credit card to people I hardly knew to go make emergency runs to Home Depot or Target or wherever. But for the most part, the producer wasn’t really needed on set.

But that provided me with a very unique and special opportunity…

It was always my intention to document the making of Interlude here on Fan Film Factor. And so, when Josh’s camera started rolling, so did mine! Of course, my camera isn’t nearly as awesome as the one Josh was using, but it didn’t have to be because I wasn’t shooting Interlude. I was shooting the shooting of Interlude!

I’d brought along extra batteries and rechargers and memory cards because my goal was to record as much behind-the-scenes footage as I could. The videos I’ll be posting are intended to share with you, my readers, as much of the experience of actually being there in person as possible. As such, these are going to be loooooooong videos because I filmed pretty much EVERYTHING.

Now, before anyone asks, I am purposefully not editing down these videos. If you don’t want to watch the whole thing, then by means, please skip around. But please understand that these videos are meant to be immersive, the complete experience of actually being there on set for two days of shooting. If you ever wanted to know what that’s like, this is your chance…right in the middle of both the action and the, um, not-action.

This first behind-the-scenes video doesn’t include any actual shooting, though. Instead, it’s a very special look at Ares Studios while it was “waking up” and coming to life in the two hours prior to the 10am call time.

Camera in hand, I arrived at Ares Studios just about 8am and wondered if I’d be the first one there. Nope. About half a dozen early birds were already going about their various jobs getting everything ready. So I set up and began filming and interviewing all of the my FANtastic film film team members.

Over the course of the next two hours, I saw something amazing—and now you’ll see it, too. What began with a mostly quiet atmosphere of calm anticipation slowly began to fill with more and more people. Before your very eyes, you will see Ares Studios transform into a hustling and bustling film studio, filled with people and activity and excitement…