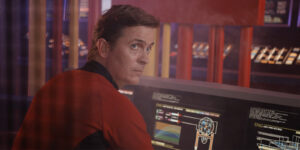 I’ve been writing a series of blogs about all of the typical things that happen with fan films, things that I’ve been encountering during the development of INTERLUDE. But now it’s time for something that I don’t think has ever happened on any Star Trek fan film!

Someone in our cast has asked (demanded, actually) for his shots to be completely REMOVED from the Interlude fan film…forcing us to re-shoot specific scenes using a different actor and to re-edit those scenes back into a new version.

The actor in question is PAUL JENKINS. I won’t go into details on this other than to say what is already known publicly: that Paul and ALEC PETERS are involved in litigation following Paul’s parting of ways from the AXANAR sequels in the early summer of last year. As I understand it, Paul is concerned that his appearance in a fan film that features Alec Peters in a leading role within the Axanar continuity could imply some kind of endorsement by Paul of Alec, Axanar, Ares Studios, and/or Axanar Productions.

Paul’s request/demand for all footage of him be removed from Interlude came first via a Facebook message sent to me barely 24 hours before the big premiere on April 5. Obviously, that was not enough time for us to make such significant changes, and we weren’t about to delay the release on such short notice. I’d already told the entire fan film community plus my friends and family about it. Heck, my parents had told all of their friends about it!

So as planned, we premiered the version of Interlude (with Paul in it) that we’d worked so hard to complete, but on the request/demand of Paul and his CEO at META Studios, a disclaimer was pinned as the top comment of the YouTube video page making clear that “META Studios and its employees, including Founder and Chief Creative Officer Paul Jenkins, DO NOT endorse the use of the Axanar logo and the solicitation of funds for the purpose of creating fan films associated with CBS intellectual property. “

So yeah, that happened.

We also agreed to their imposed constraint that Interlude could only be posted to the AVALON UNIVERSE YouTube channel and not to the Axanar YouTube channel, probably costing us a few hundred thousand views during our opening week. The video still crossed 50K views in 12 days with more than a 97% thumbs-up/thumbs-down ratio, so I didn’t really lose any sleep over it.

Meanwhile, our director of photography/editor JOSHUA IRWIN jumped into action to act on to Paul’s main request.demand to be removed entirely from Interlude, and two weeks later, Josh has come through with flying colors.

This was no small feat, folks…!

The first challenge was securing Ares Studios for filming and finding a time when Joshua was able to make the 12-hour drive (each way!) from Arkansas to Georgia for re-shoots. Fortunately, unlike last year when the pandemic made filming anything inside extremely problematic at best, recent COVID vaccinations across the U.S. have alleviated most of the concerns about working within a confined studio set.

The second challenge was finding an actor re-record Paul’s segments…and one willing to do it for free. Even though the chief engineer of the U.S.S. Artemis has only three lines, those lines happen at an emotionally charged moment in the film. This wasn’t something that we could hand off to just any random Trek fan volunteer in the Atlanta area. We needed someone who could match the dramatic intensity of the moment and, even more importantly, the TIMING! Because the musical score already exists and is timed out, the new versions of the engineer’s lines have to match perfectly to the timing of Paul’s original delivery. A trained actor could make that happen.

Fortunately for Interlude, Josh’s very good friend TYLER DUNIVAN was available and willing to step in and help us out free of charge. For those who don’t recognize the name, Tyler played the lead character in the first two Avalon Universe fan films, GHOST SHIP and AVALON LOST. He’ll also be returning in a new Avalon Universe fan film called COSMIC STREAM due out soon! (Oh, and Tyler does an amazing imitation of MICHAEL J. FOX from the Back to the Future movies.)

Tyler Dunivan on the bridge of the U.S.S. Excalibur in the Avalon Universe

Tyler joined Josh for the round-trip drive across four states, all for a one-day shoot at Ares Studios. Fortunately, thanks to vaccinations, the two of them were able to stay over with Alec for the night (they drove back to Arkansas the next night!), saving on the cost of a hotel…since all of the crowd-funding for Interlude has been spent.

Josh was actually able to turn lemons into lemonade on this trip, using the time on the Ares bridge set to film some footage for an “ask” video for an upcoming crowd-funder for another new Avalon Universe fan film that will cross over with the Axanar universe and feature the return of Captain Imari Jakande, played by new fan-favorite actor WARREN HAWK! (Jakande might not have died in the Avalon Universe, folks.) 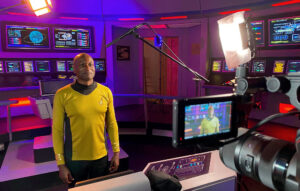 Warren Hawk returns to Ares Studios for the first time since shooting Interlude in 2019.

I’d like to thank Josh and Tyler from the bottom of my heart for making themselves available so quickly to do this reshoot (less than a week after Paul told us to replace him)…and for making the ridiculously long drive on such short notice. Tyler knocked it out of the park, matching Paul’s timing and nailing an awesome performance.

Also, a big thanks to Alec for making both the studio and his home available. And another big thank you to our musical composer KEVIN CROXTON, who interrupted work on his latest James Bond fan film to take the new footage of Tyler and re-mix it along with ambient engine room noise and other sound effects along with the music itself.

Y’see, you might think replacing Pau’s shots is easy-peasy stuff. But not even close. In addition to Kevin’s work on the sound and music levels, Josh had to set up the lighting and framing for the shot itself and then take the footage and match the balance, color, and black levels to the other shots. Then he had to insert some of the footage into the frame of the arm display of Jakande’s command chair and then cut everything precisely to match the timing of the original. And all of this was done—by Josh, Tyler, and Kevin, plus others at Ares Studios like DANA WAGNER and PAUL OSBORNE—within two weeks of Paul’s last-minute demand to be removed.

And now that Interlude is 100% “Jenkins-free,” the new version can RE-premiere, and this time on the Axanar YouTube Channel as well as the Avalon Universe channel. Take a look….

And the best news of all is that, now that Interlude is clear to return to the Axanar channel, Alec can now also re-post the episode of Axanar Confidential that originally premiered Interlude and features seven members of the cast and crew discussing it. So check that out, too, if you haven’t seen it yet…

And finally, there’s a NEW Axanar Confidential featuring Josh and Tyler talking about what went into preparing “Interlude 2.0″ that also just premiered. So LOTS for you to watch today…