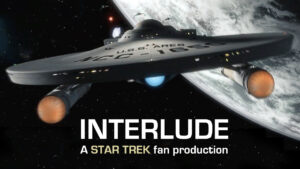 (I know you wanna see INTERLUDE! Feel free to scroll down to the bottom of this web page, then come back to read the full blog entry.)

I was a fan of AXANAR even before the launch of their first Kickstarter campaign back in early 2014. And when PRELUDE TO AXANAR was released that summer, I was ecstatic. There had never been any fan film like this one, and it FELT like the Star Trek I had grown up with…something I couldn’t say about the newest Trek movie releases from Paramount and (later) television releases from CBS.

Later that summer, I jumped at the chance to volunteer to help pack and ship perks to donors (of which I was one, of course), and I got to know ALEC PETERS, DIANA KINGSBURY, ROBERT MEYER BURNETT, and a bunch of other folks involved with the production. Heck, I even joined the gang along with RICHARD HATCH (may he rest in peace) at a P.F. Chang’s in Long Beach after a convention for an awesome dinner experience.

By 2015, I was writing weekly “Fan Film Friday” blogs for the Axanar website about other Trek fan films…something that led to the creation of Fan Film Factor half a year later. Fan films in general, and Axanar in particular, had quickly become a major part of my life as a Trek fan.

Interlude was born in stages, but I can trace its initial origin back to June of 2017 when I was reading Alec’s new 2-part Axanar script. The legal settlement with CBS and Paramount forced him to trim the full-length movie script down to two 15-minute segments that would be filmed in the same mock documentary style as Prelude. 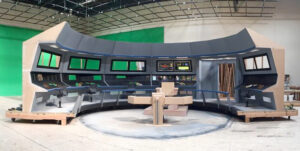 By this point, the amazing half-completed bridge set was being packed up and moved cross-country from southern California to Georgia, and I was looking forward to seeing how bridge scenes would be incorporated into the “mockumentary” format. But to my shock and horror, there were NO bridge scenes in Alec’s new script…only the same “talking heads” dialog and VFX as there was in Prelude. Huh?

What I didn’t know at the time was that Alec had purposefully left out any bridge scenes because he wasn’t certain whether he’d be able to raise the funds to complete the set. However, not knowing why there weren’t any bridge scenes, I mistakenly assumed Alec just felt like he couldn’t squeeze them in and still tell the story properly. So as a way of demonstrating that it was possible to have bridge scenes, I wrote a new version of the script…what I call my “alt-Axanar” script. Alec won’t be using it (he’s fine with his own version), but someday after the two Axanar sequels are released, I’ll publish it here on the blog just for fun.

With the help of local volunteers in the Lawrenceville, GA area and funding out of Alec’s pocket, construction on the bridge was completed, consoles painted, panels printed and placed, monitors and screens inserted, digital animations created, and electrical power issues solved.

The bridge was publicly unveiled to fans and donors at the first Axacon in November of 2018. Naturally, I had to be there and take LOTS of pictures. My best photo became iconic (used in all sorts of Axanar media)…

Following an amazing weekend of convention panels with special guests like J.G. HERTZLER, GARY GRAHAM, DAVID GERROLD, and others, I was floating on a cloud with Axamania after flying back to Los Angeles. And that’s when I interviewed JOSHUA IRWIN and VICTORIA FOX, two fans who work professionally in the film industry in Arkansas and who had just completed the first of the AVALON UNIVERSE fan films, GHOST SHIP.

After we finished recording our interview, we started geeking out over the new, just-revealed bridge set. Josh and Victoria hadn’t been to Axacon, but Josh had seen the photos. As a professional filmmaker, Josh talked excitedly about all of the ways he might light and shoot that 360-degree set. And so I asked if he’d consider filming an Avalon Universe episode there. He said he’d love to produce something on that amazing bridge, but he didn’t have a script that would justify it.

Then I thought of my alt-Axanar script. There was way too much to film the whole thing, but how about that opening sequence that had been turned into a 7-page comic book? Josh and Victoria needed to see an actual script first, so I took the comic book story—which was an expansion of a short 3-page segment of the original alt-Axanar script—and turned it BACK into a shooting script, just longer than 3 pages this time.

I changed the title to Interlude…much easier to say than “Stardate: 2245.1”! But the new title was also intended to inform viewers of the chronological order of this story in the context of Prelude to Axanar and the two sequels. My story would begin just at the moment that Prelude ended and would lead into the two sequels. Thus, it would serve as an “interlude” between the major fan films.

Josh and Victoria liked what they saw, and in early 2019, they agreed to take on the project as, what I thought at the time, would be co-directors (like the Russo brothers who co-directed Avengers: Endgame). Ultimately, Victoria would be credited as director and Josh as director of photography. But both have been essential to every aspect of development of this fan film. 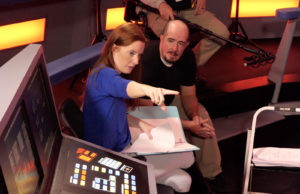 Of course, it takes more than just directors to make a film…something I discovered the moment that Alec told me, “And Jonathan, you get to be executive producer!” And it was at that exact moment that I realized two things: 1) I had no frickin’ idea what an executive producer does, and 2) I had no choice but to learn…and learn fast!

But I also realized something else: since I write a blog about fan films—what an incredible opportunity to share my fan filmmaking journey, my “trek,” with all of my readers. Step-by-step, step-by-misstep, successes and failures, eureka moments and hidden landmines…I would document everything I learned and everything I did in a series of blogs covering the entire development process from inception through crowd-funding, pre-production, production, post-production…right through release.

In the coming weeks and months, I’ll be presenting even more behind-the-scenes looks at things I couldn’t show you folks yet because I didn’t want to give away any spoilers. This will include blogs about the post-production editing process and some awesome footage that sadly had to be left on the cutting room floor. It will also include blogs about the music, sound-mixing, costumes, and even footage taken during actual filming. Yes, you’ll actually get to see how all the magic really happened…a rarity because most times fans don’t film themselves filming fan films. 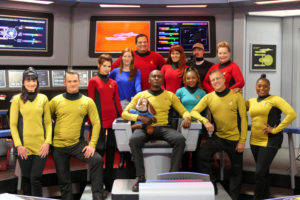 I do want to say loudly and proudly that Interlude is NOT simply “my” fan film. This is OUR fan film—mine, Victoria’s, Josh’s, and all of the 50 to 60 production crew members: our amazing actors, our 1st assistant director, our VFX and CGI wizards, our amazing composer, our four associate producers (including GLEN WOLFE who made his WARP 66 Studios sickbay set available to us), all the background extras who spent most of the day sitting around waiting for short bursts of activity, costumers, hair and make-up people, sound engineers and mixers, the guys with hammers and drills and paint brushes, the guys making sure that Ares Studio was ready and running smoothly for our two-day shoot in November of 2019, production assistants, grips, even our caterer and on-set medic. Oh, and those hundreds of wonderful, generous donors who believed in us enough to give their money to make the dream possible. 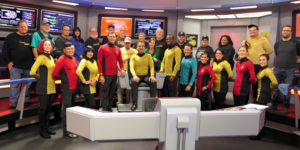 It took a village to create Interlude, and I can’t ever thank everyone enough! Rather than try to list them all here, just sit and watch the credits and know that every name that appears in the scroll is someone who has given me one of the most precious gifts I could ever receive: the realization of my dream of making a Star Trek fan film—and not just any Star Trek fan film but one that all of us can be wonderfully proud of. It was truly one of the most amazing and awesome experiences of my life.

One last thing before I show you our completed fan film. I promised myself that when I published the blog premiering Interlude that I would share the following comment that was posted to Facebook during our original crowd-funding campaign. As you can see, not everyone believed in the dream… 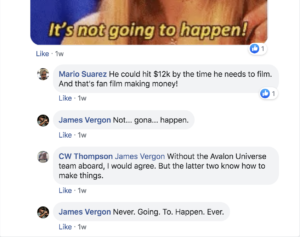 There were other doubters, of course, but I saved this particular screen cap because it so perfectly epitomized the absolute certainty which some people had that this project would NEVER be completed. I looked back at this comment every so often as we made our steady progress on Interlude. Sometimes things went slowly, and occasionally the team faced daunting challenges. But I never once doubted that this project would come to fruition. Although I’m sure he didn’t intend it as such, James Vergon’s snarky Facebook comment contains an important message for all the dreamers out there: don’t listen to the nay-sayers. Ever.

Instead, believe in YOURSELF because that is the first and most fundamental step to turning your dreams into realities.

“We are the music makers, and we are the dreamers of dreams.”

And on that happy Willy Wonka note, I am proud to present to all of you, after two long years in the making, the next chapter in the saga of Axanar. Ladies and gentlebeings, I give you: Interlude…