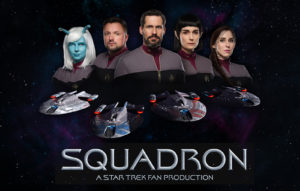 Here’s the link to donate to SQUADRON’s Indiegogo (if you can afford to right now):

With just under two weeks left, it’s highly doubtful that the Indiegogo campaign for the Czech fan film SQUADRON will reach its $15,000 goal. That didn’t seem to be the case back in February when the campaign was launched. Of course, way back then (seven seeks ago), the world was a VERY different place, and crowd-funders for a quality fan production like this one had a decent chance of making it.

And Squadron really IS a very high quality fan film. Along with fantastic looking uniforms, Hollywood-level props, and eye-popping prosthetics and makeup, these folks actually have a full 360-degree 24th century bridge set! Just check (or Czech) out their amazing trailer…

A Star Trek fan film set during the Dominion War is a rare thing in our community. And almost unheard of is a fan film that features a Vorta and two Jem’Hadar because the make-up demands are so far beyond the capacities of most fan productions. But just take a look at this trio…! 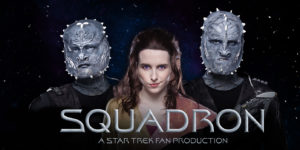 And that’s not all. They’ll also be featuring an Andorian, a Vulcan, and an Orion. All the live action footage has already been shot, but the Squadron team needs money to complete post production…including visual FX. Unfortunately, the campaign is less than a quarter of the the way to its goal with only 13 days left.

But these folks are NOT giving up!

Once or twice each week, they release a new video in one of four categories: Behind the Scenes (including an awesome look at how they did their make-up), Movie Clips, Trailers, and Trek Talk. The latter playlist includes a really interesting close-up examination of a screen-used Voyager uniform (purchased at auction) and the following tour of their humble studio in Prague that includes the amazing bridge and ready room sets…

In other words, they’re trying really, really hard to keep folks interested and excited. Their Facebook page has new posts and photos and videos almost daily. Just yesterday, they revealed new test footage of the CGI model for their main Federation starship…

But it’s now crunch time! The Indiegogo deadline is April 20, leaving little time to reach their goal—or even just inch a little closer to it. So I was curious: what does a Central European fan production do when the world economy is collapsing around our ears, and crowd-funding dollars are harder and harder to come by? Is Squadron in jeopardy of not being able to be completed if they don’t reach their goal? Or is there a lower threshold that still makes this eagerly-anticipated fan film possible?

For answers, I reached out to Squadron executive producer JAKUB HOLÝ…

JONATHAN – I’m sorry that your Indiegogo campaign seems to be struggling, Jakub.  You started off very strong, but then the pandemic hit, the global economy collapsed, and a lot of crowd-funders are hurting for donations.

JAKUB – Well, first of all, let me say that we are delighted that we got to this amazing amount considering that the world has kind of turned upside-down in the seven weeks since we started our campaign.  We realize that, for a lot of people, donating to an Indiegogo for a Star Trek fan film all the way in the Czech Republic must be a pretty low priority at the moment. So even more we appreciate anyone that donates these days.

JAKUB – Well, it’s a complicated answer.  As you know, we have all of the live action footage already filmed.  So what we still need are the visual effects, and those have to be paid for because they are very time-consuming.  Also, there aren’t a lot of people here in the Czech Republic who do VFX.  We’re actually having local people do some of our effects and SAMUEL COCKINGS from Great Britain do the rest because there’s a lot to do.

JONATHAN – So how much money do you absolutely, positively need to get all of your visual effects done?

JAKUB – Initially, we had figured that about half of our $15,000 goal would go into visual effects.  The rest would retroactively cover the money we had already put into things like costumes, prosthetics, make-up, props, equipment rental, etc.  And since that money was already spent a while ago, we had hoped to put any new funds that were raised through this campaign (and not used for VFX) into the creation of new sets and materials for our next project.  Obviously, now, that is no longer our priority.  But finishing the VFX is. 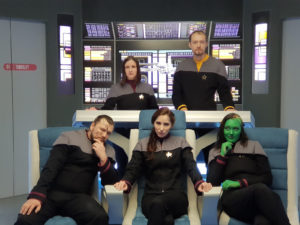 JONATHAN – What if you come up short?

JAKUB – Difficult choices.  Obviously, we’ll need to cut some of our planned VFX shots.  Some might be made shorter while others could disappear completely.  It’s possible that some of us might try to pool our financial resources to make up the difference, but $3,500 is a lot of money here in the Czech Republic, and most of us are already struggling during this global crisis.  So we’re really hoping for fans and supporters, through donations no matter how small, to help us get as close to half-way as possible so that we can include all of the VFX that the original script calls for.

JONATHAN – Is there anything you’re planning do to try to get people to donate just a little more?

JAKUB – Other than doing interviews like this one?  LOL

JONATHAN – Yeah, any other ideas?

JAKUB – Well, we’re continuing to release special features like our bridge and studio set tour and discussions with our cast and production crew.  And we are thinking of creating one more really exciting trailer to try to motivate people to donate just a little more to our campaign in the final days. We also launched a small supporting series called Trek Talk, where we review Star Trek collectibles on the bridge. We’re trying to get as much exposure as we can generate.

And of course, we do have 62 backers, about 50 of whom donated $20 or more.  If each of them could donate another $20, we’d have a thousand more dollars…which would make a big difference for us.  It’s not the full amount we need, but it would be a significant move in the right direction.  However, we realize that giving any money now is not the same situation as it was when we began the campaign a month and a half ago.  The world has changed so much, and money is getting very tight for many, many people.  So we don’t expect much, but every dollar will help.

Aside from that, I’m just hoping we can continue to get coverage like this short interview and that fans and supporters will help us at least spread the word and the link.  Even if they can’t afford to donate anything right now, just letting people to know about us is a big help.

And just in case you missed it, my friends, here’s the link to donate if you can afford to in the next 12 days…