In Part 1, we took a look at the story behind PARAGON’S PARAGON, the first “major” Star Trek fan film to be produced…way back in 1974. It wasn’t the first Trek fan film ever; those were being made when TOS was still in first-run (like THE THING IN THE CAVE from 1967). But writer/director/producer JOHN COSTENTINO, a carpet-layer from Warren, Michigan, spent $2,000 of his own money (the equivalent of $11-15,000 today) to build multiple elaborate set replicas of the bridge, transporter room, turbolift, and other parts of the starship Enterprise (or, as he renamed it, the U.S.S. Paragon).

John based his story on the James Blish Star Trek novel “Spock Must Die!” released by Bantam Books in 1970. His characters were the same, only with different names like Captain Richard Kirk and Mr. Sellek. The final film ran 100 minutes and was shown for a number of years at various Star Trek conventions. But as time went on, this seminal piece of Star Trek fan film history slowly disappeared into obscurity. John wrote some behind-the-scenes articles with a few black and white photos, but for the longest time, if you wanted to see any part of Paragon’s Paragon, that was pretty much it

In 2012, one fan posted about 8 minutes of Paragon’s Paragon highlights on YouTube, but the voice dialog was gone, replaced by a sound track of simple Trek background music. It was enough to get a taste of what Paragon’s Paragon looked like, just not what it sounded like.

The following year, John Costentino himself posted a low-resolution video of Paragon’s Paragon bloopers to his blog site. Those appear below…

Still, for fans wanting to get a true feel for this fan film, there simply wasn’t much available. But then, in April 2021, the same fan who had posted those 8 minutes of highlights, ROBERT LONG II, unexpectedly posted a new, longer version…this time with restored audio! Although still not the entire 100-minute fan film, the two 15-minute parts show the first 25 minutes plus 5 minutes of “next week on Paragon’s Paragon.” You can view the two videos here…

Intrigued by this mystery fan, I reached out to him through his “1966tvbatman” YouTube channel. Robert was happy to chat, and here’s what he had to say…

JONATHAN – Welcome to Fan Film Factor, Robert. Where are you from originally, what do you do for a living, and how did you acquire the skills to do the sound restoration on Paragon’s Paragon?

ROBERT – I’m originally from the Midwest—Davenport, Iowa. As a kid in the 1970’s, I became a graphic designer doing book covers. I ended up being in that vocation for over 30 years. As a sideline, I’ve worked in independent films since the late 1980’s. In 2006, I moved from Hollywood, CA to the Baltimore, MD area of the East Coast. This was so I could work for DON DOHLER and Timewarp Films. I think my strongest points in the “biz” are directing as well as writing, though I’ve done the whole gambit from rendering storyboards to building props to acting. 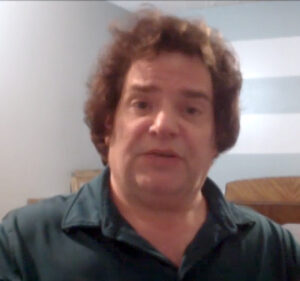 JONATHAN – And that includes a bit of sound-mixing, I’m guessing?

ROBERT – A bit here and there.

JONATHAN – How did you get your copy of Paragon’s Paragon?

ROBERT – John Cosentino had written some articles for Don Dohler’s Cinematic Magazine back in the 1970’s. In 1976, Don started his first major film project, The Alien Factor. He tapped John to be heavily involved with the production. This meant making two creature costumes, building miniatures, filming additional scenes, and acting as one of the creatures himself. So John went on to work on three of Don’s movies in total.

At some point, John gave Don a con copy of Paragon’s Paragon on VHS. What that means is that Don had a condensed version of the movie (25 minutes plus 13 minutes of making of) that he could show at various Baltimore area sci-fi conventions. By the early 2000’s, Don was making movies again, and he and I had become close friends. He knew I was a huge fan of the articles John had written about Paragon’s Paragon and decided to give me the original convention tape on the condition that I didn’t make copies for other people. None of us wanted to see this bootlegged all over the place.

JONATHAN – So it’s safe to say that you’ve been a big fan of this film for a very long time.

ROBERT – Absolutely. John Cosentino didn’t do the first fan film for the series, but he did do the first MAJOR one of the series.  He had no VHS tapes to work from, no CGI, no Internet. I’m not even sure the Starfleet manuals and blueprints were available in 1974. Everything had to be physical. Optical effects were put together for super 8mm on a homemade optical printer. This final achievement is nothing short of a miracle all things considered, so watch it with a warm smile and a forgiving wink of the eye.

JONATHAN – Speaking of forgiving, I know that in today’s society, there’s a feeling that a white person wearing blackface is disparaging to African Americans. On the other hand, this was 1974 and not quite as enlightened or racially sensitive as today. How do you feel about John’s decision to put dark makeup on his Lt. Uhura character rather than casting an actual black actress.

ROBERT – I do get irritated when people ask about the female lieutenant that is wearing makeup to look African American. John was trying to be as true to the series as possible. It has NOTHING to do with any sort of race highjacking—or whatever modern society wants to call it. John didn’t do any outside casting; he stuck with family and friends for the cast and crew. He didn’t know anyone of Asian or African descent at the time, so it’s as simple as that. While the crew had different names, he WAS trying to make it as close TOS as he possibly could. 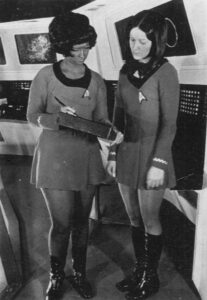 JONATHAN – My feeling is that, if you look into John’s heart, you don’t see malice there. He wasn’t using the blackface to mock or marginalize nor to demean or denigrate black people. In fact, just the opposite. He didn’t want to replace a prominent black character with a white one just because he didn’t know any black people and had no idea how to find one willing to shoot a Star Trek fan film under hot lights for days in some white guy’s basement…for free. What John wanted to do was to honor NICHELLE NICHOLS and her heritage.

When you think of all of the true racists in our country—both then and now—and compare them to John’s well-meaning (although ultimately politically incorrect) attempt to pay tribute to Nichelle, I think people have to determine for themselves who really deserves their scorn an anger. (Hint: it’s probably not the guy who made a fan film in his basement 47 years ago so much as the people in Congress trying to stress the importance of “Anglo-Saxon political traditions” in forming a new “America First” caucus.)

Okay, stepping down from the soapbox now…

Back in 2012, you posted about 8 minutes of Paragon’s Paragon “highlights” without the original sound. What was the story behind that?

ROBERT – The highlight reel. By 2012, I was working for a video company and was able to transfer the VHS video of the fan film to an mp4 file on DVD. The rip of it was really good, all things considered. I didn’t want to post the movie without John’s permission (I had only talked to him once on the phone at that point), and I wouldn’t have been able to anyway. The sound was terrible. So I posted some of the best bits with a watermark (which people hate, but tough) and music from the original series. So the highlight reel has no dialogue. I just wanted to give people a taste of the movie without breaking my promise to Don.

A couple of months later, John himself uploaded three minutes or so of his own highlights to YouTube that had dialogue you could understand.

JONATHAN – Well, your latest version certainly sounds better than what John uploaded back in 2012. What was involved in you rescuing the sound?  What made it degrade so badly in the first place, and how did you fix it? 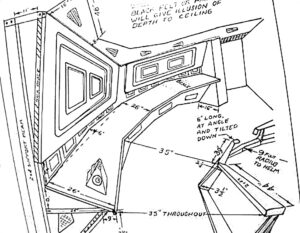 ROBERT – John admits that he mixed the music and the sound effects way too hot.

JONATHAN – By “hot,” you mean that the levels of everything were way too loud, right?

ROBERT – Yes. And I am by no means am any sort of an audio genius, so I did a few things in Adobe Premiere to fix the sound. For the voice audio channel, I boosted the volume control to the highest setting. Under audio effects, I ran three different filters on it including decrackler, dehummer, and denoiser. Also, I shifted the audio to only one channel (I’ve gotten complaints about that), and I duplicated the audio channel with all these settings, which in turn makes the sound richer.

So, it’s not perfect, but you CAN hear the dialogue better without the music and sound effects drowning it out. I hadn’t touched it in YEARS, but I recently found the decent copy. I did the sound adjusting and re-rendering within a matter of a week. John saw it and gave me permission to post it. That’s why we have it now.

JONATHAN – Can you do the same magic for the remaining parts of the film?  How many more minutes are missing?

ROBERT – I got the con copy of the movie. I believe that John Cosentino had transferred the entire movie to VHS tape at one point, and then sent Don Dohler the abbreviated copy from that to show at conventions: 25 minutes of the story plus 13 minutes of making of. The entire original film is 100 minutes. I know some conventions have time limits for fan films and such, at least back in the day, so that’s probably why the con copy didn’t include the full movie.

I talked to John several years ago. He still had the Super 8mm film, but by that time, it was fragile. I mean, maybe he has the VHS tape that can be transferred in full and have the audio fixed from there. For himself, it may not be worth it to have the film transferred or the tape transferred. It can’t be shown for profit, and it certainly would end up bootlegged at convention tables. I’m sure there are a ton of us out there that would be happy to do it for him, but that’s entirely up to John. I am thankful that after 47 years, we have at least this much of it to finally look at. For that, I’m grateful to John and Don. 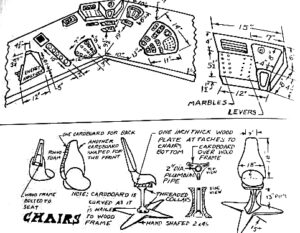 Another of John’s original sketches

I will add that the “Previews of Next Week” part at the end was pieced together by me from “the making of,” the bloopers, and the pieces that John himself posted. This gives the fans and the viewers at least a taste of the other 75 minutes that aren’t online.

JONATHAN – Any chance you could talk John into trying to resurrect and restore the remaining minutes of the original film?

ROBERT – John is mostly retired and enjoys playing his golf. I haven’t talked to him in years on the phone, but we have exchanged letters recently. He’s not big on email—more old school. If anyone else out there can get the entire movie from him and posted, I for one will cheer them on.

JONATHAN – Well, hmmmm, that sounds like a job for some obsessive fan film blogger! I’ll see if I can find one…