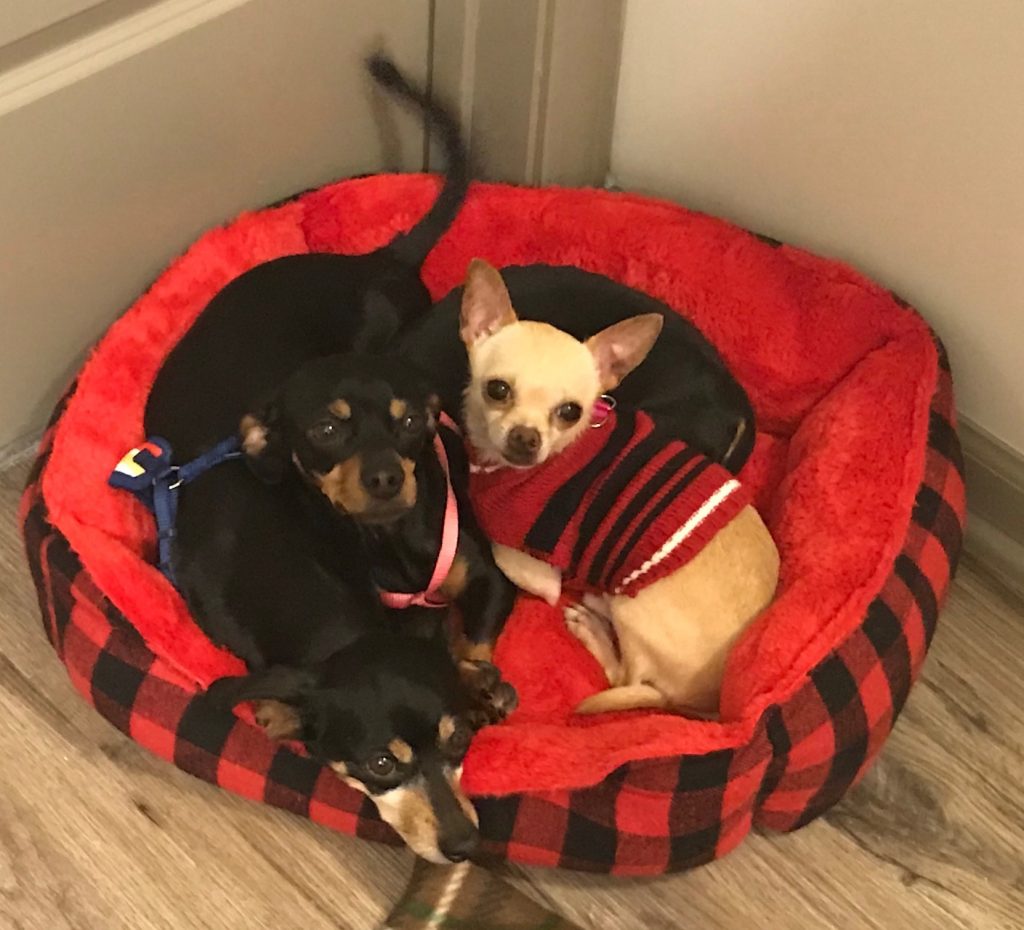 Doggies have been dominating the agenda the past month while I was reviewing the second draft of The Four Years War, Parts IV & V that Paul Jenkins has submitted, working on a student film production program at OWC Studios with the Gwinett County high school film programs, and prepping a Star Trek prop auction among other things.  More on that tomorrow.

So first, the dogs.  About 3 weeks ago, I got woken by my girl friend Crysstal who told me about these three dogs that were in the apartment below her Mom and being mistreated.  There was a Chihuahua and two Chiweenies (A Chihuahua/Dachshund mix). They had been left out on a concrete patio for two of the coldest nights in Georgia with no food, no water, no blankets.  Her Mom had gone down to that apartment, but the couple there didn’t speak English, so she had put out some food and water on the patio, but you couldn’t even get to the patio as there was a living room full of furniture being stored there.  She had to do it over the patio fence.  When, after another freezing night, where the dogs easily could have frozen to death, especially the tiny Chihuahua, Crysstal’s mom called Crysstal and she and I went down to the apartment.

The conditions were clearly as bad as Crysstal’s Mom said.  There was no food, no water, poop everywhere, these dogs were being ignored.  I knocked on the door and was greeted by a nice couple, who unfortunately didn’t speak English.  Now my Spanish is spotty at best, so we tried to communicate and we got that the dogs were not theirs.  They then they called a friend who did speak English.  I told this guy what the problem was, and it turned out the guy who was in charge of the dogs was staying at his place, but he didn’t speak Spanish either so his friend interpreted.

The story we finally heard from the management office of the complex was that the owner of the dogs went to Federal Prison.  His partner was left with the dogs, and he had been evicted.  When the management company went into their apartment to clear it out, the dogs were locked in a bathroom.  Again, no food, no water, poop everywhere. Animal Services was called. When they arrived to take the dogs, the owner’s partner showed up and said they were his so they couldn’t take them.  He moved everything into the friends apartment, left the dogs on the patio with nothing and went to his friends house.

I told him we were taking the dogs, and if he wanted them back he could call me.  Crysstal went to get the dogs, reached over the patio fence and the Chihuahua practically lept into her arms.  She jumped the fence to get the other two.  We brought them to our new two bedroom apartment, which happens to be an ADA apartment, so the second bathroom is huge.  We fed them, gave them water, put down blankets and pee pads, got them dog beds, and started walking them 6-7 times a day as they needed training.  No one had walked them, so they had been pooping where they lived.  They had to be trained to poop and pee outside.  The two Chiweenies are mother and daughter.  The Chihuahua is a boy.  The previous owner had obviously been breeding them.

They are the sweetest dogs, and after 3 weeks, they are mostly trained.  One of the ladies at the management office wants Pee-Wee, the Chihuahua, and we will be looking for new homes for the Chiweenies after we get them all spayed/neutered. They have already been to the vets, gotten their rabies shots and checked out.

When you rescue dogs, you get paid back for your time and effort by the love the dogs give you in return. They are so happy, you can see them change as they realize that someone cares.  Al they want is to be loved and taken care of.

Sorry to take up this space talking about non-Axanar issues, but we will be back to updating you all on the news from Axanar tomorrow!