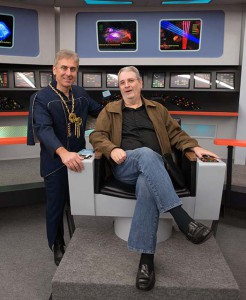 Last weekend Crysstal and I took David Gerrold to lunch.  Sushi of course, which we all love!  It is always good to catch up with David, who is working on the fifth of his War with the Chtorr books (as well as his prolific Facebook posts!).  I hadn’t seen David in a couple months and we always like hanging out and chatting.

I also gave David the close-to-final Axanar script to read.  This is the feature film script (which we will sadly never make), but Bill Hunt and I are working to have a final, approved version as we think really nailing this script will make fans happy.    It is also important for the overall Axanar universe.  The are more stories in this universe, written by both myself and fans. We all need a common basis for that universe. The script is also what I am using to write Episodes IV and V of The Four Years War, the two 15 minute versions and I have gotten notes from David on the Episode IV script already.

The above photo was taken by the amazing Garth Gullekson at the “Heroes” shoot in November 2015, when James Cawley invited us up to Ticonderoga to shoot.  The shoot was used as a backdrop for the CNN piece on New Voyages.  And yes, our photographer’s name was “Garth”.  It was a real honor having David on board at that shoot helping with the script and a lot of fun.

And Happy Father’s Day to all fathers out there!