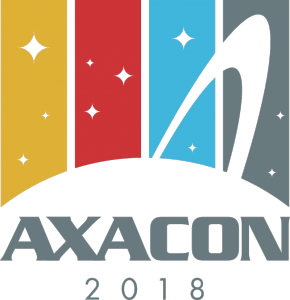 Well, we are starting to plan Axacon 2018!  Axacon is a convention unlike anything out there.  Why?  Well, because we are Star trek fans who want to do something special for our fans.  Axacon, like Axanar productions, will be a not-for profit event.  In fact, there are two local Georgia film education programs that we want to benefit and have involved.  As we discussed over a year ago, the idea is to allow each fan to shoot a bit of film on the USS Ares bridge!

Axanar has been a part of Treklanta for the past three years and we are huge fans of Eric Watts, its creator.  Axanar sponsored the Star Trek Fan Film Awards last year and we have had a table there 3 years running.  Treklanta is a small but very passionate Star Trek convention, and being Atanta-based, we want to make sure we work with Eric and promote both events.

I mention Treklanta because we want to create an event that has many of the traditional elements of a convention, along with a studio tour of OWC Studios, shooting fans on the USS Ares bridge, and panels on Axanar and its future.

Now we are planning the event for August 25-26th 2018, the weekend before Dragon Con.  That date was overwhelmingly chosen by fans who it seems want to come for both events!  So this year, we are doing a bunch of things, sort of like a test run.  We have a big volunteer weekend August 26-27th at OWC Studios, Larry and the OWC team in town for a visit, and hopefully a ribbon cutting ceremony with the city of Lawrenceville.

So stay tuned, and over the next year we will keep you posted on what is coming!