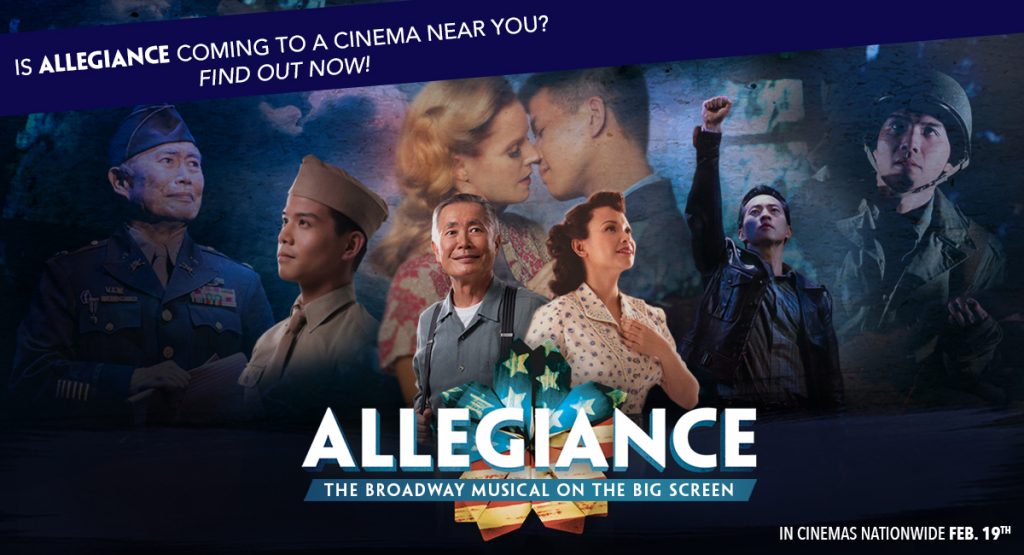 We saw this last month and it is awesome.  Such a shame it closed on Broadway, but you have the chance to support Uncle George!

“George Takei’s Allegiance: The Broadway Musical On The Big Screen” will begin with an exclusive introduction from Takei and immediately move into the musical’s presentation. After the feature, audiences will also be treated to behind-the-scenes footage and interviews with the cast and creators.

“At a time when echoes of the internment ring once again far too loud in our political discourse, there’s never been a better moment for the story of Allegiance to find new audiences,” said star Takei. “It is a true testament to the power and the relevance of this story that so many people attended its premiere in December, and it is only appropriate that even more people will be able to witness it on such an important day as February 19, 2017. The Day of Remembrance is a day of commemoration, of reflection, and of learning, and I hope Allegiance can play an important role in its celebration, this year, and for many years to come.”

Allegiance illuminates one of American history’s lesser known chapters as it tells the story of Sam Kimura (Takei), transported back nearly six decades to when his younger self (Telly Leung, Godspell, “Glee”) and his sister Kei (Tony Award®-winner Lea Salonga, Miss Saigon, Mulan) fought to stay connected to their heritage, their family and themselves after Japanese Americans were wrongfully imprisoned during World War II. An important story told with great resonance and intimacy, Allegiance explores the ties that bind us, the struggle to persevere and the overwhelming power of forgiveness and, most especially, love.

“The response from the audience who attended the premiere has been overwhelming. While its Broadway run may have been cut short, the story of Allegiance truly speaks to audiences everywhere and we are honored that its legacy continues, through this encore with Fathom Events and beyond,” said Allegiance producer Lorenzo Thione. “Moreover, we are truly excited that the story, music and message of Allegiance will expand its reach to more people, cities, and even countries, continuing to move, educate and inspire, truly fulfilling George’s legacy.”

Go here to find out about tickets!