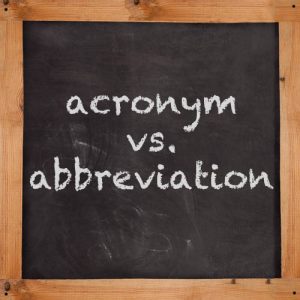 This weekend was a nice relaxing one after the week of getting settled in Atlanta.  So what happened in the world of Axanar?  Well, not much actually.  But let’s look at a few other things:

Here is my take:

The problem is DSC makes no sense.  It is not an abbreviation of the title as in The Original Series (TOS) or The Next Generation (TNG) or Deep Space Nine (DS9). Nor is it the first three letters as in Voyager (VOY) or Enterprise (ENT) neither of which are actually referred to in conversation by their abbreviations as you just say the one word name.

So under this convention it is not DSC, but DIS.  Now CBS wants you to believe that Voyager was always VGR.

Yeah, NO ONE calls Voyager VGR.  I have never seen that abbreviation used. BTW, got a complaint about Star Trek?  That is the guy to Tweet at.

And Captain Kirk piped in. 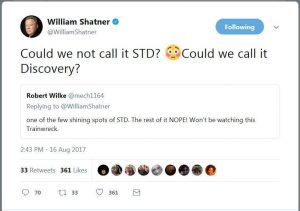 And that gets to the main point.  Why do we need an abbreviation for a one word title?  We call them Voyager or Enterprise.  Call this Discovery.  And besides, Captain Kirk said so!