If you were a donor to the AXANAR Kickstarter (and you’re on Facebook), you’ve probably seen a boatload of lovely pictures from other donors who’ve received patches from the AXANAR KS campaign. (As for the accompanying comments about those patches, well… let’s just say that words like “Awesome!”, “Amazing!”, and “Outstanding!” are generally involved. 🙂 ) 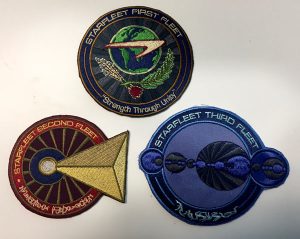 Oooh, aaah, look at all the pretty…

So, you might be asking, what exactly did those happy campers do to get their (awesome, amazing, & outstanding!) patches?

But–and here’s the bit I told you in a previous blog would be coming a little later–it’s now time for the other AXANAR Kickstarter donors (meaning those who donated at “basic donation” or “digital-only” levels of $10-$30) to have the opportunity to get some cool AXANAR patches, too. [Please note that this is ENTIRELY OPTIONAL. If you donated from $10-$30 and are happy with digital-only rewards, you need do nothing else; you’re good to go. ]

However, if you’re a $10-$30 AXANAR KS donor who has been jealously eyeballing those pictures of patches and wishing that you could get your hands on some, too, we’re now opening that up to you, too (just like we said right in the Kickstarter that we’d do!). I’m also opening up a second option (so you can get even more than originally offered)… 🙂

Okay, so let’s go over the high points one more time:
AXANAR Kickstarter donors who donated between $10-$30 are now eligible to receive patches from the campaign–but only if they choose to!–by sending the s/h fees in either the amount that gets them the two promised “Stretch Goal” patches OR at the amount that gets them the “Stretch Goal” patches AND the donation-level patch. Include a memo in the Paypal payment, that it’s for the “Axanar Kickstarter Stretch Goal Patches”. Lastly, log into your AD2.0 account and make sure your shipping info is updated/correct.

What about all of you AXANAR Indiegogo donors? We’re waiting on the rest of those patches to come in before shipping can commence. Once they do, I’ll let you know…

Over and out, everyone!