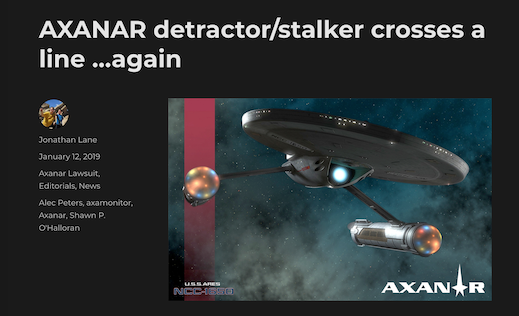 There is a dark side to fandom.  It is when zealousness and passion takes a turn towards the dark side of human behavior, fueled by the weaknesses and insecurities of certain individuals.

For three years there has been a concerted movement of detractors, fueled by lies and hatred, and even supported by CBS during the lawsuit.  While we usually ignore them, and let their behavior show how ridiculous they are, their pathological behavior has turned towards stalking as of late.  A couple of these individuals even devolved into full-blown stalking, following my girl friend and I around in public and at Star Trek events.

But the behavior of one sick individual has grown into something we are consulting with lawyers and law-enforcement officials about.  Behavior that is similar to that of stalkers who have wound up resorting to violence.

I hope you will read the article on Fan Film Factor.

We have fans cannot accept stalking of anyone for any reason.