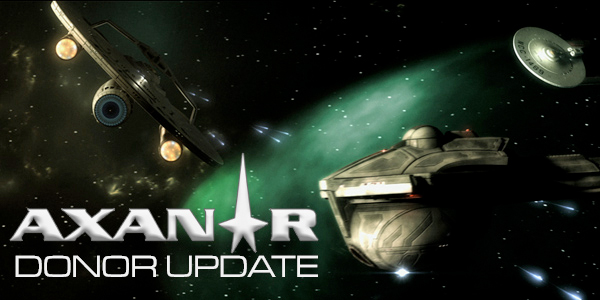 The first four months of  2018 have seen slow but steady progress on Axanar.  As you all know, the lawsuit settlement with CBS allows us to make two more 15 minute episodes of Axanar.  These will be Episodes IV and V of The Four Years War.  With much of last year taken up by the settlement, closing the studio in L.A. and opening the studio in Atlanta, it wasn’t until the end of the year that we started making progress on the next two episodes.  So here is the latest:

The best way to stay in touch with Axanar (outside of reading our website) is to listen to the Axanar Podcast!  And # 52 is now available!  Listen here:

In February we announced that the script of the two 15 minute episodes was locked.  What does this mean?  You can read all about it on our blog here:

In February, our Director of Donor Relations, Diana Kingsbury, got some help in the form of Natalie Armstrong Gill, our new Director of Fulfillment.  Natalie will help get all the perks out as we finally get the Indiegogo patches and the Blu-rays after we film.  While Diana has done amazing work helping donors over the past 4 years, being that she is still in L.A. and the studio in Atlanta, we needed someone to help with the actual shipping of perks.  You can read about Natalie here:

Want to find out more about writer/director Paul Jenkins?  Jonathan Lane at Fan Film Factor did an interview with him and you can read it here:

Two great pieces of Axanar Fan Fiction have come out recently.  The first is “Why We Fight” which is an Axanar illustrated short story by Jonathan Lane.  You can read it here:

And then the start of the second Axanar comic by Trey McElwain has been released.  You can find it here:

It is the enduring power of Axanar that is shown over and over by loyal fans who want to see more Axanar!  Thank you to Jonathan and Trey!

Thank you all for your support and continued patience!