Today we interview Steve Jepson, who played Admiral Slater in Prelude to Axanar.  Slater has a bit of a cult following among Axanar fans, mostly because we know so little about him!  So here we get to know the actor a bit.

Wow, I really can’t think of when I wasn’t a Trek fan. I grew up with TOS, but really wasn’t able to spend a lot of time with them until syndication. I was a teen then, so it was come home from school and catch Star Trek at 4! 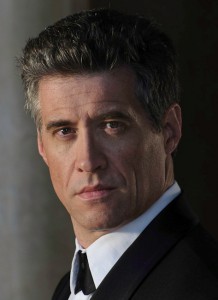 Like I said, I grew up with TOS, so I’d say that was the jumping-off point for me. I watched the other shows (including TAS!) and the movies, and I’d say that every show needed a year to find its way out of TOS’s shadow, you know what I mean? Each had to find their own way…there were enough duds to go around in every series. I mean, Spock’s Brain? Really? (laughs)
But that being said, my wife and I recently were able to rewatch Deep Space Nine on Netflix, and talk about a show based on long story arcs! Some of it would not have pleased Gene, but it was a great show to show that humanity (and other species’ cultures) are continually evolving, which is one of the core tenants of Star Trek.

Though a fellow stage actor, Brian Holloway. Brian had worked on makeup effects on New Voyages, and had always wanted me to come up to New York and work with them. I think he even sent James Cawley some video of me on stage (we did Man of LaMancha together). Anyway, I had moved to Iowa for my doctorate, and Brian told me about this new concept that was about to be filmed in LA, and thought there was a great role in it for me – the lead Klingon, Kharn. 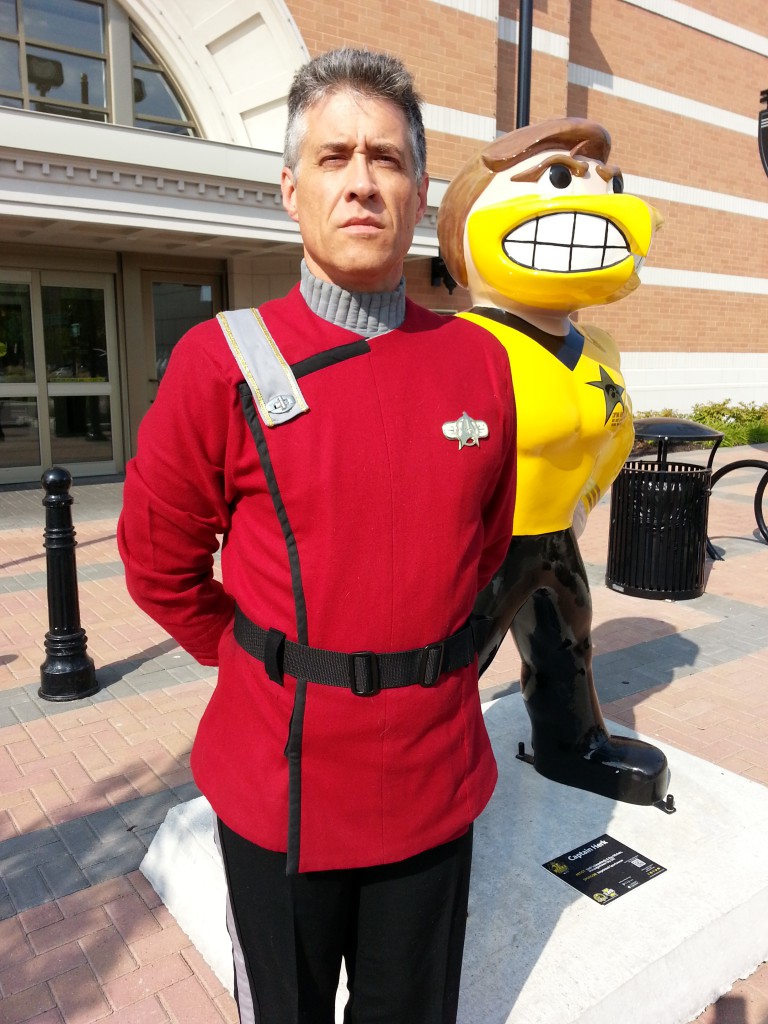 Well, I was going back to North Carolina for some other reasons, so I told Brian that I would be able to come over and shoot a test for Kharn. As a real Trek geek, as well as a great makeup artist and costumemaster, he had the full costume at the ready, as well as the ridge prosthetic for the TNG-style Klingons, non-Augment. I had gotten the script…and I believe you and I (as well as Christian Gossett) had been in email conversations prior to the shoot. So, I went over to Brian’s house, he made me up, and we filmed some dialogue.
The cool thing is that Brian and I are close enough in size that when I noticed he had a “Monster Maroon” movie duty jacket that was being used as a cat bed, he just gave it to me, along with the pants!

5)         I have to believe you were disappointed when Richard Hatch got the role of Kharn!

Well, my first thought was, “Oh, they brought back this hack to do the role! (laughs) Seriously, it made me more excited about the project. To get him involved in a project that was a fan film meant that it must be something very, very different than what I’d seen before then. And it really was! I was on the edge of my seat when it was first released – and it was FANTASTIC. Classic Trek, and really captured the spirit, using characters we immediately wanted to know more about. Your team knocked it out of the park!

6)         Admiral Slater almost has a cult following.  And he is ripe for a short story about his backstory or was happens to him after.

And I have to say I’m floored about it. I mean, I’m the only one in Prelude who doesn’t speak! (laughs) It’s amazing that so many people have an interest in Slater, and even more so that they are pulling for him; they don’t want him seen as the Federation’s Neville Chamberlain.

And it’s also very humbling…I don’t think Slater will ever be considered canon, whatever that means these days. But every time Axanar is mentioned and discussed, Slater will be mentioned – and MY FACE is what they remember. That’s mind-blowing. I’m actually a part, albeit a small part, of a social phenomenon that meant so much to me in my formative years…something that I can say kept me alive during them. And for that, I have to say thanks, Alec.

I’ve been a professional singer and actor (opera, musical theatre, etc.) since 1986, and I’ve also been a teacher – voice, acting, directing. I’m currently on the voice faculty at the University of Missouri – Columbia. I’m still singing – people who want to hear me can go on SoundCloud and look for Steven B. Jepson, or they can visit my website, stevenbjepsonbaritone.com.

Well, throughout the year, people come to visit the campus at Mizzou, usually with their parents, so we have student greeters walk them around campus in groups, and talk about buildings, history, and such. My office is in the Fine Arts Building, which is right across from the main library. A few years ago, I was walking from the library and passed a large group. I was in business casual; my typical “uniform” when I’m not wearing a suit. Well, two guys in the back of the group saw me. One did a double-take, and said to his friend, “Dude…that’s Admiral Slater!!” 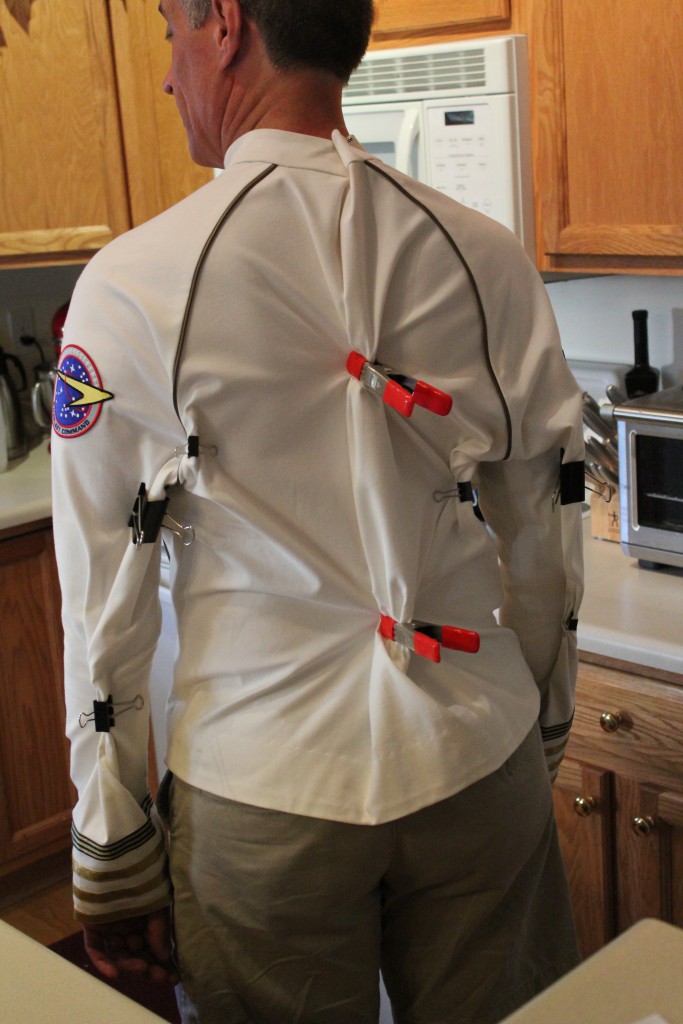 Jepson had to pin back Tony Todd’s costume for his now famous photo!

9) What other Science Fiction shows do you watch?

Wow, where to start? Star Wars, BSG, I’m wanting to get into The Expanse when I have the time. My schedule really hasn’t allowed me to catch up on a lot. I like things with good character development, and a space battle every now and then is a plus. Oh, and I absolutely LOVE The Orville. It’s Seth’s love letter to Trek, and it shows. He’s keeping it upbeat with the wackiness and such, but he’s also willing to tackle today’s issues with a future bent, just like the best of TOS and TNG.

Thank you. I’m really touched and humbled by your comments and kind words. It really means a lot to me. And I promise that Conrad Slater (or, Admiral Clucky – BAWK!) will remember you!

Thanks to our favorite Admiral for taking the time to chat with us!