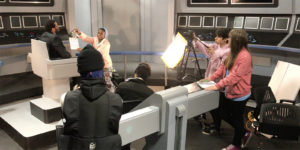 In my previous two blogs, I featured an interview with PASHA SOUVORIN, the Video Pathway Lead Teacher for Gwinnett County Public Schools and a teacher at Phoenix High School in Lawrenceville, GA. Over the past 18 months, his video students have filmed multiple productions on the amazing 36-degree bridge set at ARES STUDIOS.

Initially constructed to be used in filming the sequel(s) to PRELUDE TO AXANAR—and still planned for that project—the bridge set and (recently added) captain’s quarters have been made available to the entire Gwinnett school district free of charge by ALEC PETERS. Now that we’ve heard from a video teacher, it’s now time to hear from some of the students.

I met two of them last November at Axacon. ALLISON FALCH (who is married to DANA WAGNER, the man in charge of completing the finishing touches on the USS Ares bridge set) teaches video at South Gwinnett Public High School, and she brought along these two charming young students on Friday afternoon when Ares Studios was opened up to Axacon attendees. As we were shooting various video interviews with the con guests and the bridge itself, we devoted a few minutes to a chat with Allison and her students…

And then last week, as I was assembling my two-part blog interview with Pasha Souvorin and was complimenting his students’ films, Pasha asked if I’d like to interview two of his student directors. Sure! So I wrote up some questions for EMILIA HOPE and VENESSA CHELLO. Both provided wonderful and articulate answers that showed how significant an impact being able to film on the Ares Studios bridge set has had for them.

Before I get to these two interviews, I’d like to point out that all four of the student directors featured in this blog entry are WOMEN! And in a male-dominated industry, I am both proud and encouraged to see that the femalefilmmakers of tomorrow are getting a head start, too. Also, of these four women, one is African American and two are Latina…so let’s hear it for ethnic diversity!

And here’s a quick video snippet of Emi directing…

Venessa wrote the script for The Shoffice, which was suggested by one of her classmates as an idea that her team (a group of students given the assignment by Mr. Souvorin) agreed would be fun and interesting to produce. Here is their finished short film… 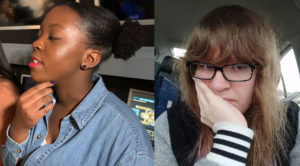 JONATHAN – When you first found out you would be able to shoot a film on this elaborate sci-fi set, what thoughts went through your mind?  What possibilities opened themselves up with access to Ares Studios that you didn’t have before?

EMI – Having access to Ares Studio spurred all sorts of exciting ideas for me. I immediately began thinking of how I could take advantage of this opportunity to create a unique production, borrowing elements from some of my favorite influences. In Danger-S‘s case, I was particularly inspired by the dark comedy style of the sci-fi roleplaying game Space Station 13. While it’d technically have been possible to shoot a film like Danger-S without such a professional set, I think the set really brings some of the scenes to life and adds a degree of immersion that we wouldn’t have been able to achieve otherwise.

VENESSA – When I found out I was shooting on this set, my mind went a million miles per hour (in other words, I was really excited). Knowing that, I wanted to do some scriptwriting but directing mostly for whatever idea we choose. I started thinking of all the ways I could tie in a sci-fi theme with what we were doing and make it fun. 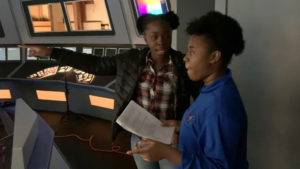 When I finally saw the set online and in person, I honestly felt lucky, blessed, and nervous simply because, before the spaceship was opened to Phoenix High School, a good portion of films were filmed at our school or in a public setting. So having the option to do it on an actual set gave me a more personal and spacious setting to work with fewer interrupts or limiting factors. Also, I got a chance to gather lots of information from a professional director and filmmaker, Alex Bright, which I feel like a lot of people starting out in film don’t get that opportunity. So that was cool.

JONATHAN – What did you do specifically to prepare for shoot on the set itself?  What did this preparation and your experiences filming there teach you about film production that you didn’t know before?

EMI – Once we had toured the set, we began carefully considering how to best use the area for each shot. Even then, however, we still found ourselves having to improvise when things weren’t working as planned. It was a very interesting experience to work on a set that had been constructed specifically for film production, as most of my prior experience lied in utilizing pre-existing spaces. If filming this movie taught me anything, it’s that film production can be equal parts careful planning and quick thinking. 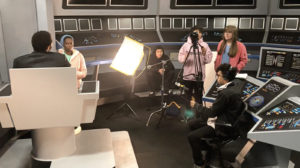 VENESSA – When I first found out that I was going to be directing and writing the script. I started to think about being a director, tried stepping into a director’s mindset, and started looking up and getting advice on what a director and screenwriter looks like from my teacher and YouTube videos.

What filming and preparing to film at the Ares Studio has taught me is that when making a film, timing and planning is everything. I say this because it takes time to set up the lights, the actors, and make sure the camera is in the right place. If the foundation for the film is not set up and correctly coördinated, it can throw everything in chaos.

JONATHAN – How long did it take you to write your script, and how long were you in production?  How long did post-production take you?

EMI – Keep in mind that we have 2-hour classes, 4 days a week. I’m a pretty fast writer when I get excited about a new idea, so finishing the first draft of the script only took maybe 3 days maximum of working on it in class. A lot of what was initially written stayed in the production, with a few extraneous bits cut out.

We then spent 2-3 weeks filming at the studio during class period. Driving to or from the studio took about 10-15 minutes, leaving us with an hour and a half to film each day if we were lucky.

Another 2-3 weeks were spent editing in class, during which I finished a rough cut, and I spent several more weeks in the second half of the semester after that polishing it into what it is now. I’ll let you do the math on what all that totals out to, but as you can probably tell, we were on a tight schedule. 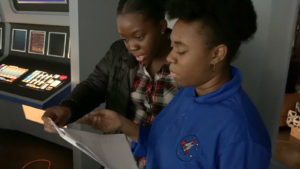 JONATHAN – What was it like directing your friends and classmates?

EMI – I didn’t know my classmates all too well at the time, and I’m not sure if knowing them would have made it any less awkward to boss them around. Overall, though, it was a positive experience. I had enough creative control over the project to make sure it came out more or less how I envisioned, and taking initiative over the production was a healthy challenge for me. I only wish we had enough classmates that semester that I didn’t have to direct and act.

VENESSA – Directing my peers, you could say, took me out of my comfort zone because a lot of people would say I am an introvert. All in all, it really taught me a lot about how to work with people on a set. Plus, it gave me an insight as to how I want to relate to people on my set in the future.

JONATHAN – What’s next for you in terms of film production?  Is this something you’re thinking of pursuing professionally as a career when you’re finished with school?

EMI – Presently, I’m writing and directing yet another project in Mr. Souvorin’s class. It’s a satirical detective noir-style comedy titled Nikita Noir in: The Phantom Report Card. As for my future plans, I’m working towards finding my place in Georgia’s film industry, wherever that may be. I’m not sure if that place is as a director, but I’ll see where my ambitions take me.

VENESSA – In terms of my future in the film business, I plan to attend the Georgia Film Academy in the years to come. Until then, I’ll be practicing my hand at script writing and advancing my skills in directing online.

JONATHAN – And finally, what advice would you give to other students at your school and nearby high schools if/when they get a chance to film on the Ares Studios sets?

EMI – Ares Studio is a professional set, and I think it deserves a professional level of attention, or at least as much as a group of high school students can manage. There are a lot of things I wish we could’ve done better with Danger-S, but we were working with a small crew and a smaller timeframe. With larger-scale projects like the one that was just filmed there should come better quality, I’d hope. I suppose my advice is: respect the set and you’ll end up with a fantastic finished product. 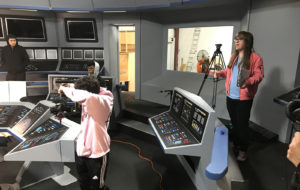 VENESSA – My advice to other students would be to soak in the experience of being on a real set because it’s a special and rare opportunity that not a lot of amateurs in filming get to experience. And in the event that you make a mistake, don’t over think…find ways to improve, and keep pushing through!

JONATHAN – Awesome! Thanks so much for talking to us, and all the best in what looks to be two very promising careers making films.