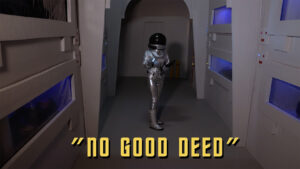 THE FEDERATION FILES fanthology series is like a box of chocolates: you never know what you’re going to get. That’s because GLEN L. WOLFE and DAN REYNOLDS of WARP 66 STUDIOS in northern Arkansas have decided that no era of Star Trek history is out of bounds for them to explore. This has included everything from the 1950s through today into the 23rd century and beyond to the 24th century. It’s a really fun fan series to follow.

Most recently, in what is their overall eleventh completed fan film since their first release (“His Name Is Mudd” back in 2016), The Federation Files takes us both into the Trek movie era and also back to 1996 when the SS Botany Bay was launched following the Eugenics Wars. (You remember that, right? It was only a quarter century ago.)

But for those two eras, Glen managed to construct two unbelievably believable sets for a fan-produced film (plus a Vulcan moon base command center set). The first unbelievably believable set was was a recreation of Kirk’s San Francisco apartment from Star Trek II and III. The other was the interior of the aforementioned Botany Bay in a sequence that looked like it could have been built at Paramount Studios back in 1967!

Granted, as I said, these were fan-produced sets, so they’re not precisely identical. But they’re close enough that a viewer can squint a little and accept that, yes, Saavik has walked into Kirk’s apartment and a Vulcan wearing a space suit has entered the sleeper ship containing Khan Noonien Singh and the genetically-engineered supermen.

Take a look at “NO GOOD DEED”…

This fan film was released way back in early November, and I had wanted to interview Glen months earlier than this. But in December, Glen became seriously ill—as in “had-to-be-hospitalized-and-nearly-died” kinda ill. Rumors flew that he had caught the more deadly delta variant of COVID. Others said he had pneumonia…or both! Either way, it took Glen months to recover, but I am pleased to report that he is now on the mend.

In the following video, we discuss what happened to put Glen into the hospital, along with discussing these impressive set recreations, production of this latest episode, Glen’s experiences being involved with other fan films and series, and all sorts of other things that come up when two Star Trek fan film-o-philes get together and geek out. Oh, and at the 42 second mark, you even get to hear me sing (oy vey!)…