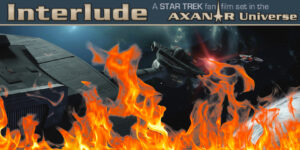 I can finally and proudly announce a release date for my AXANAR Universe fan film INTERLUDE:

We‘ll be premiering it during a special Axanar Confidential livecast this Monday night at 10:00 pm Eastern Time when I and a bunch of members of Team Interlude will be appearing with Fleet Captain Garth himself, ALEC PETERS. You can find the livecast on the Axanar YouTube Channel.

Let me tell ya, folks, for the last week or so, I wasn’t quite sure we were gonna make that deadline! While there’s no one holding a phaser to our heads to release Interlude on April 5th, “First Contact Day” is a coveted spot among Star Trek fan filmmakers if they can hit it. But I checked around, and this year, no one I spoke to was claiming that day (and if they had, I would have let them have it and just chosen a different date a week or two later). So with the coast clear, I started mentally preparing myself for April 5th.

Although we’ve been REALLY close to completing Interlude for the past few weeks, I wasn’t feeling comfortable enough to make an announcement until today. After all, we’ve been having a series of really crazy things happen along the way that have delayed or at least impacted pre-production, production, and post-production. Among these: rivers flooding, wild tornadoes, freak polar blast ice storms, trapped woodpeckers, and stray dogs on the road. Read more about them here, here, and here.

And now we can add FIRE to the list!

This past Monday, I couldn’t reach MARK EDWARD LEWIS, our post-production sound designer, for most of the day. That in and of itself isn’t unusual; Mark has a pretty busy life, and I don’t expect the entire team to be “on call” 24/7. (You need to actually pay people—and pay them a lot!—for that kind of service.)

But Monday was an important day. With just seven days left until my still-unannounced but highly desired deadline, we’d had an e-mail glitch. Two days earlier, I’d sent Mark a compilation of final notes on the latest sound mix from myself, our director VICTORIA FOX, our editor JOSH IRWIN, and our composer KEVIN CROXTON. But it was now Monday, the clock was ticking, and no one had heard back from Mark. So I messaged him on Monday morning my time (about noon for Mark in rural Tennessee) just checking that he’d be able to get those final fixes done in the next day or two and send the final audio mix over to Josh.

“I’m still waiting for a response from my last e-mail,” he replied.

Uh, oh! Apparently, Mark had sent out an e-mail on Saturday with a complex explanation about one of the notes we were requesting and asking how we wanted to proceed. But no one received the e-mail, so I asked Mark to please re-send it to everyone ASAP. He said sure, and I went off to do other morning stuff.

The hours passed…and nothing from Mark. Thinking that Mark’s e-mail might still be glitching, I messaged him. No response. I tried calling. No response. The hours kept ticking away, and Jonathan’s fingernails starting becoming ever shorter.

I wasn’t worrying without reason, mind you. Victoria was about to start a 6-hour drive from Oklahoma back to her home in Arkansas and wouldn’t be able to read (possibly not even receive) an elaborate e-mail. As the afternoon wore on, Victoria couldn’t wait any longer for Mark’s e-mail to arrive.

It was the early evening for me when I finally received a text from Mark….

Sorry. Had a fire come 100 yards from my house. Neighbor next door. I was there first. The fire dept took 20 minutes. Hose. Buckets. Shovel.

I thought Tennessee was getting hit by torrential rains and flooding! Apparently, the land owned by Mark’s neighbor waited for a break in the weather to catch fire. Sheesh!!! No one knows yet what caused it.

Fortunately, no one was hurt, and the fire didn’t burn near any homes and was put out before reaching Mark’s land…although Mark inhaled quite a bit of smoke. “But it should be a lovely spring since the fire put some great ash down for seeds,” he texted me. Always looking at the bright side of life is Mark!

Mark copy-pasted the e-mail into a Facebook IM to me, and I relayed it to Victoria. Fortunately, she was stopping for gas, had a chance to read it, and we discussed Mark’s concerns during the final 45 minutes of her drive. Immediately after hanging up, I contacted Mark with our decision, and he was finally good to go. We had a new final audio mix posted for Josh by Tuesday night.

One of the things Mark did seems to have inadvertently reduced the levels of some really important musical trumpet notes that—honestly, folks—I can’t tell the difference when I listen! But Kevin can hear it, and so can Victoria. Rather than send it back to Mark, though, Kevin is simply going take the latest audio mix file, re-lay in those brass tracks, and send the file back to Josh to insert into the video timeline. Kevin expects to have that to Josh later on tonight.