I rarely post in my Captain’s Log a post from our main Axanar Blog.  But this time it is important enough to do so.  Troy Light is a huge Axanar fan and an even bigger Star Trek fan.  And he has some thoughts about Star Trek and CBS/Paramount’s handling of the franchise that echo what most fans who know about the lawsuit feel.  So if you haven’t read this yet, please do.  And you want to know how big an Axanar fan Troy is?  Well, he got an Axanar license plate from Virginia! 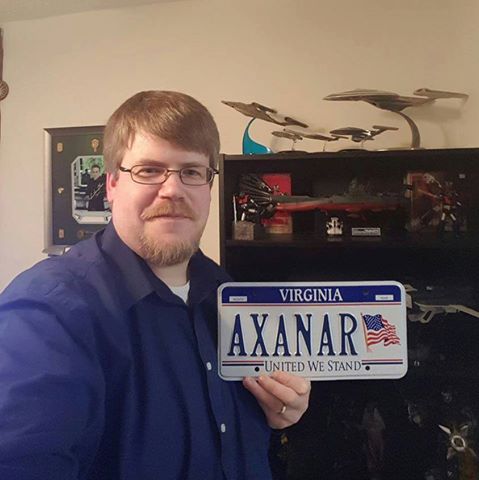 Given the most recent revelations following the ruling by Judge Klausner on the motions for Summary Judgement, I have to be honest…I’m disappointed by the current state of affairs regarding Axanar, as well as the Star Trek franchise in general.

Honestly, Gene Roddenberry is either turning in his grave or laughing maniacally at the sheer idiotic course that the CBS / Paramount people have chosen to follow. There was a time when Star Trek AND Star Wars both were treated with respect, but look at where we are now…

George Lucas has signed over ownership of the Star Wars Universe to the monolith known as Disney, churning out one movie after another that grabs our interest: the MCU in all it’s glory, crushes its rival, the DCCU (DC Comics Universe, just to be clear), with blockbuster after blockbuster. And now, Star Wars has a clear path into the future with AT LEAST the completion of the third Trilogy of the Star Wars Saga, to bring the entire Skywalker story to an end by the year 2020. Along with it, we’ll see stand-alone films that promise to fulfill our every whimsical desire to know things like: How did Han Solo become the scoundrel we came to know in Star Wars IV: ANH? How did he meet Lando Calrissian and win the Millennium Falcon from him? How did he meet and befriend Chewbacca? We’ll probably see a stand-alone Boba Fett movie, maybe even a bevvy of movies that expand the Star Wars Universe much like the novels did with what is now known as the Star Wars Legends universe.

It languishes in the hands of two companies that are so incompetent that they are the joke of the industry they are a part of. When handed the golden opportunity to make the 50th anniversary of Star Trek a celebration that would last from January 1st to December 31st, what did they do? Did they unveil a new series that would promise to revive the Star Trek television franchise and set it up for a seven-year voyage like TNG, DS9 and Voyager? Did they take the opportunity to showcase the third installment of their current movie franchise with marketing and press releases far enough in advance so as to generate a groundswell of fan support so enormous as to dwarf anything ever seen before, resulting in record-breaking box-office sales to solidly place Star Trek Beyond as the king of the Star Trek movie universe?

The answer to all those questions? No. The 50th anniversary went by with tepid support, far from the bang that they could have made, although a little more than a whimper…just a little bit more.

They made sure to gin up support for the 50th anniversary Creation Con in Las Vegas, decked out in glitter and gold, and raking it in as those fans who could afford to make the event handed over their cash to be at the once-in-a-lifetime event.

Meanwhile, the fans who couldn’t afford the Vegas experience, the fans who watch their DVD / VHS copies of TOS, TNG, DS9, Voyager, and Enterprise, and dream of a revived Star Trek that proves that the juggernaut of old still has the magic that once made it king…they wait on Star Trek Discovery, disappointed at its plodding journey, as CBS can’t seem to get out of its own way to get the show into production, missing its original goal of release in 2016, and providing little hope that they’ll get it finished any time soon in 2017. Those fans hear how Star Trek Beyond (which was a good movie in my opinion), may have failed to generate enough money at the box office to justify a JJ-Verse STIV.

And what of those fans who still believe in Star Trek and its promise, and take up the banner to attempt to make their own Star Trek fan films out of love for the franchise? They’re shackled with guidelines that would make a sane man laugh, if it wasn’t so clear that those guidelines were meant, not to help guide the creative juices of someone who wants to make a fan-film, but crush any hopes said person might have to create something of any lasting significance.

I remain committed behind Alec and his dream of bringing Axanar to life…but the most recent news of the judge’s decision, which was a heavy blow to the cause, makes me fear that this dream that Alec is fighting so hard to make a reality, won’t make the light of day…at least not anytime within the foreseeable future. Talk of going to a jury trial means more months of waiting for a decision…and if the decision goes against Axanar, there would still be the hope of an appeal…with more months and/or years added on as the case plods along in the judicial system. And if the decision goes FOR Axanar and Alec…what’s to say that CBS / Paramount won’t say, “Okay, you won that battle…but our guidelines still stand, so if you try for that 30+ minute fan-film, we’ll see you in court yet again…oh, and one more thing…APPEAL.” So the dream that started with a Kickstarter campaign may well see five or six years pass by before any chance of filming may start.

Star Trek, in the minds of CBS / Paramount isn’t a dream anymore…it’s a commodity, a golden goose that they have strangled, nearly to the point of extinguishing its spark. And when innovators like Alec attempt to bring something different…yes, SIGNIFICANTLY DIFFERENT from what we’ve seen before, and yet familiar to the fans who love this franchise…they’re shackled and prevented from doing so. And the love that fans like myself for this franchise turns sour in our hearts with the realization that CBS / Paramount don’t care…they don’t LOVE this franchise like we do. There are people at Disney involved with Star Wars who LOVE their franchise and want it to be the best it can be…why won’t CBS / Paramount let Star Trek fans do the same for our beloved franchise?