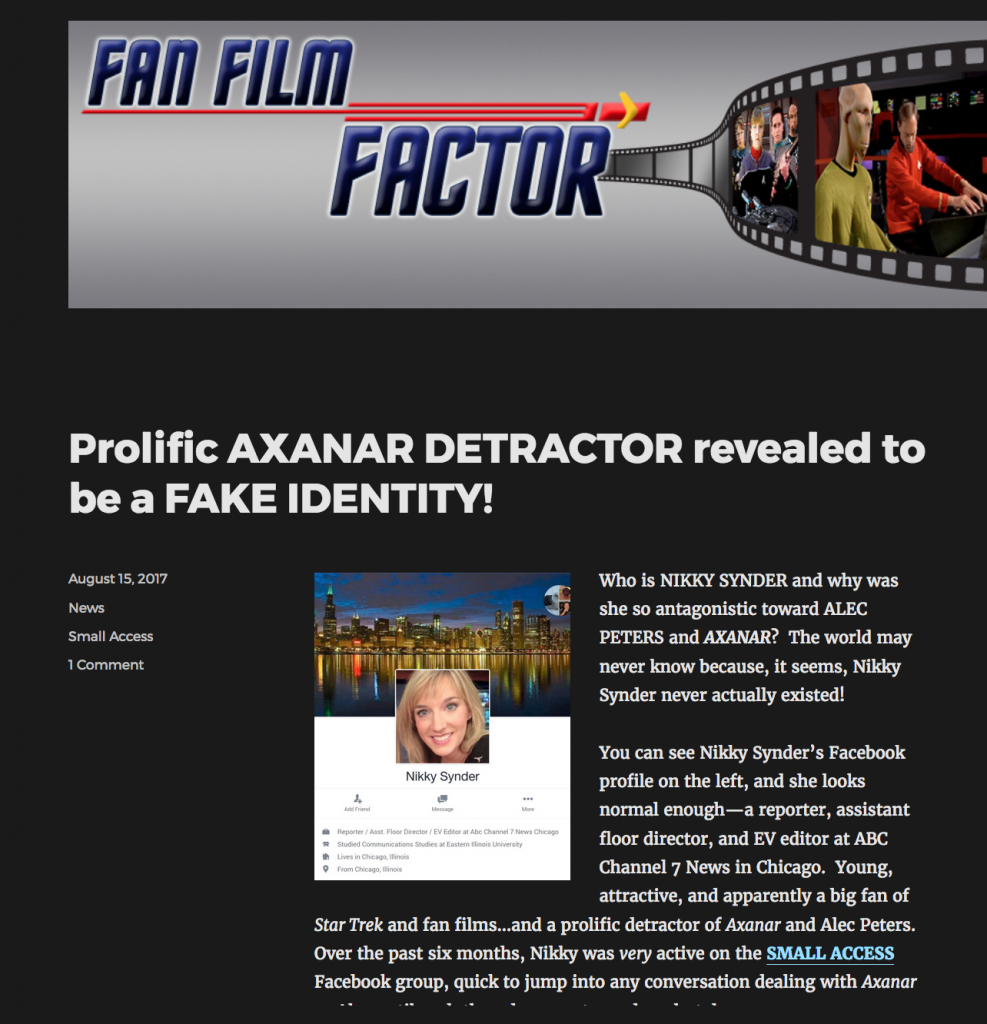 You know, we constantly roll our eyes at the pathological stalking, bullying and harassment of the Axanar detractors.   Their motivation is hate.  Hatred for me mostly, because I call them out on their asinine behavior.  I won’t cower to their bullying, and when they lie and act like assholes I tell them they are being assholes, and they don’t like that.  They are typical Internet bullies like we have all seen time and again, especially from fandom, where immature and socially unacceptable behavior has free reign.

Besides the constant lies and threats (my life has been threatened, as has Rob Burnett’s), there have been three major attempts at fraud by the haters.  All three involved identity theft, and all were likely known to, and probably encouraged by, Carlos Pedraza who maintains a secret Facebook group of the these arch-haters to discuss how to best attack Axanar and myself.

The first fraud involved one of Michael Hinman’s friends, Joshua Disraeli, who was claiming to be a millionaire wanting to donate to Axanar.  We busted that early as they were stealing the identity of a Florida lawyer and I reported it to the lawyer and got his firm’s security unit involved.

The second fraud was when Scott Carlson, another one of Carlos Pedraza’s group, tried to fraudulently rent Industry Studios.  He used his wife’s email, as if we couldn’t figure it out, and we notified her and the company that Scott was fraudulently using the information of, and ended that.  The fraud was being discussed on the secret group (we were notified by a member who thought fraud was too much), so we know Carlos and the rest were fully aware of this.

Now we find out that another of Carlos group, and one of the most pathological of the haters, stole the identity of a midwest news person. You can read about it on Fan Film Factor, where Jonathan also has a follow up with information that pretty much proves that this was hater Anthony Shuh, a stalker from Illinois who rants every day about Axanar, and ironically works in security.

All of these detractors and their actions are well known to Carlos Pedraza, who has been encouraging this behavior.  Yeah, the guy who claims to be a journalist because he was an intern at AP 20 years ago, has been helping to perpetuate these frauds.

You can read about the latest fraud in Fan Film Factor here and here.

And yes, all of the information on these frauds has been gathered and forwarded to our attorneys.  Thinking there will ultimately not be consequences for these actions, or the libel some engage in, is a mistake.

I wonder what the detractors are going to do when the next two episodes of Axanar come out next year and are as good as Prelude?  What will they bitch about then?