The First Duty is to the Truth I rarely respond to the lies of the Axanar haters.  But Truth matters, and it is after all the first duty of all Starfleet Officers.

Bill Hunt, who Rob brought in to help edit the Axanar script, covers for Rob’s misdeeds because they are friends.  And while I used to like Bill, and he has a very successful blog called Digital Bits, he has never achieved the writing success he desires outside of writing a blog.   I am not aware of him ever having sold a screenplay, and his own novel has, like so many other writer’s, never been published. He, like Rob, were looking to make a name for themselves with Axanar.

So when Rob posted his lies once again, and Bill mouthed off in support, I thought it was important to set the record straight. Here is their post and comment: 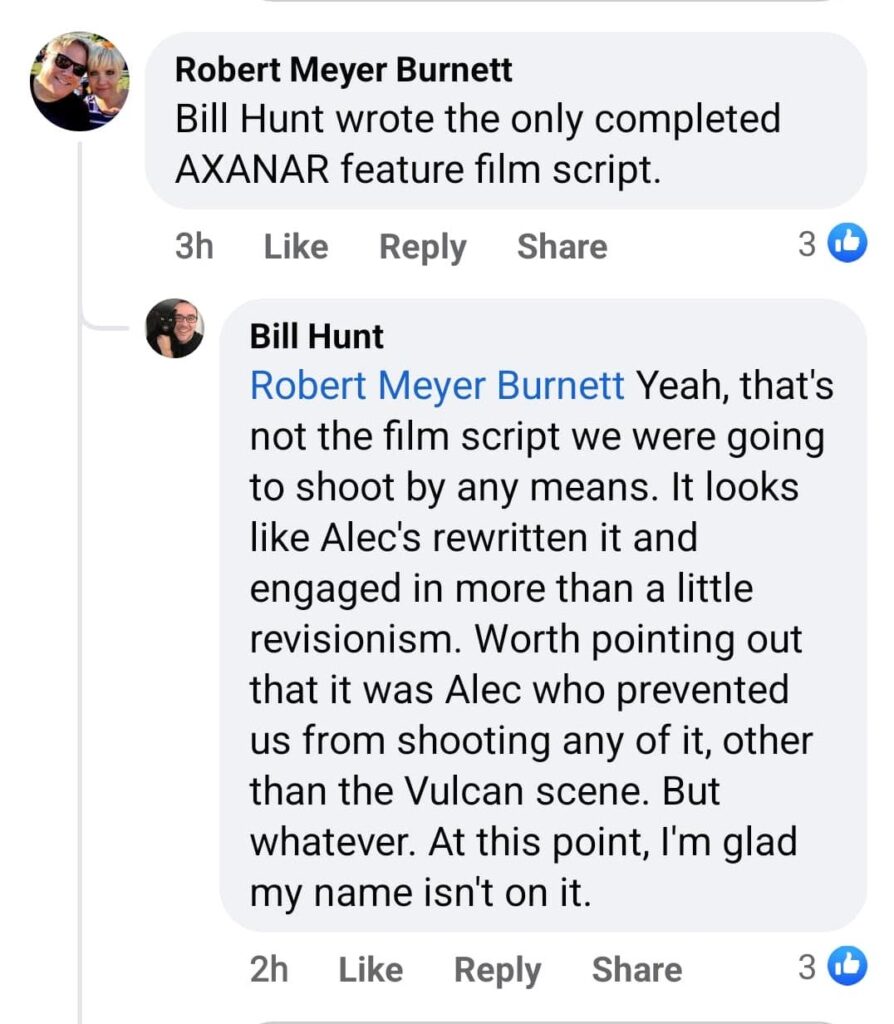 Roberts claim that Bill Hunt wrote the only completed Axanar Feature Film Script is a total lie on many levels.

1.  The Axanar Feature film script was complete before either Robert Meyer Burnett or Bill Hunt came on board. Star Trek legend David Gerrold read the completed script in 2013 and said it was “Good, real good.  It’s almost ready to shoot.” .  But Rob thought he knew better than the man who wrote “The Trouble with Tribbles”, and so asked that Bill Hunt, a blogger friend of his, with no screenplay writing experience, to help rewrite it.

2. I agreed to have Bill edit my script with the understanding that Bill runs all revisions through me and that we work on it together. Bill agreed, but later went back on this deal and cut me out of the re-writing process, writing behind my back and not running any revisions by me.

3.  The script was not “Written” by Bill Hunt.  He helped with re-writes, which is an editing function.  Claiming Bill “wrote” the script is typical of Robert’s lies.  Anyone can read any version of the Axanar script after Bill came on board and see it is merely an edit of my script.

4.  Bill’s unapproved revisions included killing off Tanaka, a main character who was slated to appear later, and removing the USS Ares from the battle of Axanar. The script had to be have those and other unapproved changes removed.

Bill Hunt’s claim that the Axanar script in the Kickstarter is “not the film script we were going to shoot” is a lie.

1.  We were going to shoot what I approved.  And since it was my script, and I was producer, any changes had to be approved by me.  I don’t know what Bill thinks his role on the production was, but he was a script editor, that is it.  He didn’t have final approval of the script, and he didn’t get to say what we shoot, and neither did Rob.  That is a fundamental lack of understanding about how films work and who gets to make decisions.

2. As the creator, writer and producer of Axanar, I get to make the decisions about what we shoot.  Thinking we would shoot anything other than what I approved is absurd (and very arrogant).

3. Some of Bill Hunt’s revisions were ridiculous.  Killing a main character who was part of the story in the future, and leaving the USS Ares out of the Battle of Axanar were two of Bill Hunt’s changes that were unacceptable and would never be approved.

Bill Hunt’s claim that I “prevented us from shooting any of it” is absurd.

1.  After the lawsuit settlement, Bill Hunt and Rob Burnett wanted to shoot the first 30 minutes of the Axanar feature film rather than two more episodes like Prelude to Axanar, because they were more interested in showing what they could do than they were in giving the donors what they wanted, the story of the Battle of Axanar.  To those two, it was always about showing off their talents, not about doing what was best for donors.

3. So Bill and Rob wanted to do what THEY wanted, not what over 98% of the fans and donors wanted.  That is arrogance for you.

4. Rob had the chance to shoot the rest of Axanar, but he quit.  He could have directed the five days of shooting we have done since coming to Atlanta, and the four days we still have to shoot, but he bailed because he couldn’t get his way. 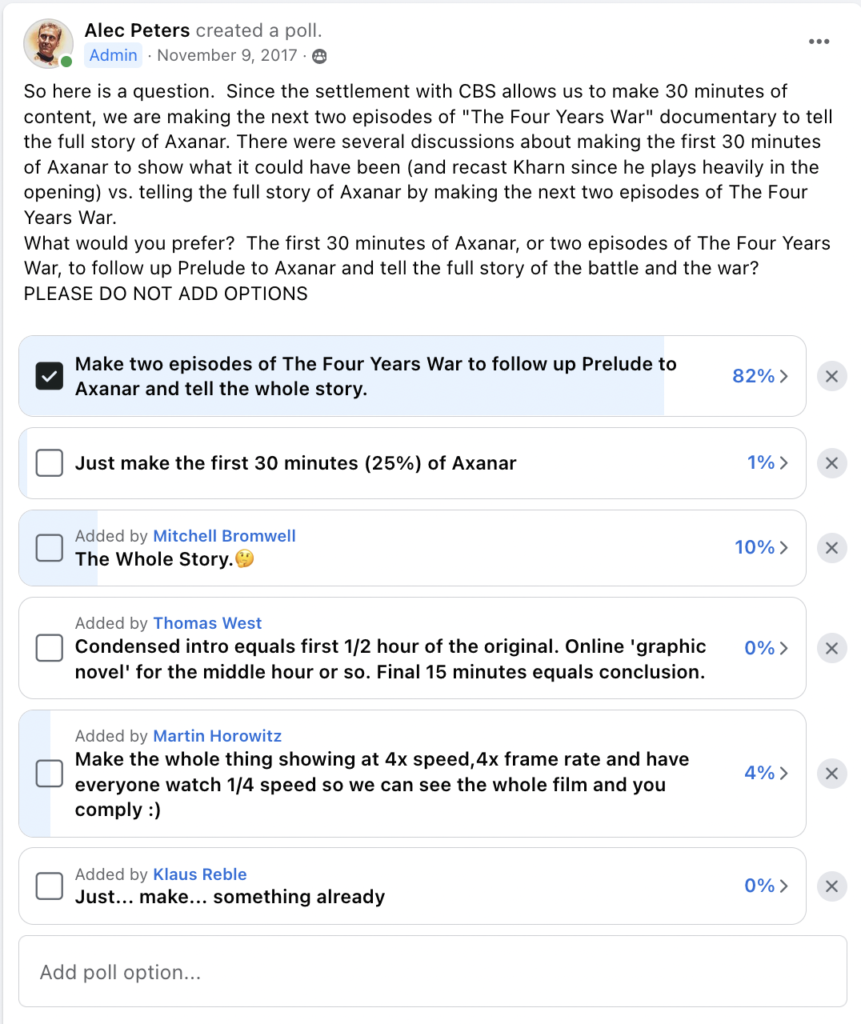 I don’t like wasting any time on these people.  But the truth has to be told.  And by posting it on this blog, it is a permanent, searchable record of their behavior.

Now, back to finishing Axanar.