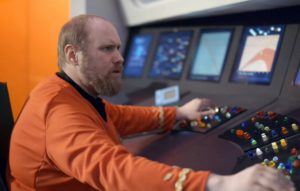 Since he first made his debut as Chief Engineer Minard on the initial episode “Legacy” of the fan series STARSHIP VALIANT back in 12014, VANCE MAJOR has been involved with no less than FIFTEEN different Star Trek fan films and series…in positions both behind and in front of the camera. That’s why I like to call Vance the “Where’s Waldo of Star Trek fan films!”

Here’s a complete list of the films he’s either produced, written, directed, or appeared in (or any combination of the above)…in addition to “Legacy”:

Vance’s latest release is, I think, one of his best yet: the 7-minute Minard. The episode provides a series of scattered glimpses into the professional and personal life of Vance’s engineering character as Minard advances through Starfleet. There’s laughter, excitement, tears, and tragedy…all in just 7 minutes. It’s worth checking out before you listen to our audio interview with Vance…

I already did a 2-part print interview with Vance back in April, and I invite you to read it, as well. But I’m following that up with a new AUDIO interview that was only completed just a few short weeks ago. In the brief time since we chatted, the prolific Mr. Major has released not just one but TWO more completed Trek fan films that were still in post production when we spoke: Minard and “Command and Conquer.” (This fella is quick!)

Vance is a great guy and really interesting to listen to, but what makes this interview really compelling is that his fan films are so cheaply done…and he doesn’t mind that! Many in the fan film community lament the passing of the high-budget mega-projects like Star Trek Continues, New Voyages, Renegades, and Axanar. Barely two years ago, the future of Trek fan films seemed to hold such promise…

And it still does! That’s what this interview is all about. Sure, we might not see the hundred-thousand and million-dollar Trek fan films any longer, but the genre is far from dead! Guys like Vance Major are keeping the dream alive and prospering, and he’s about to tell you how and why…