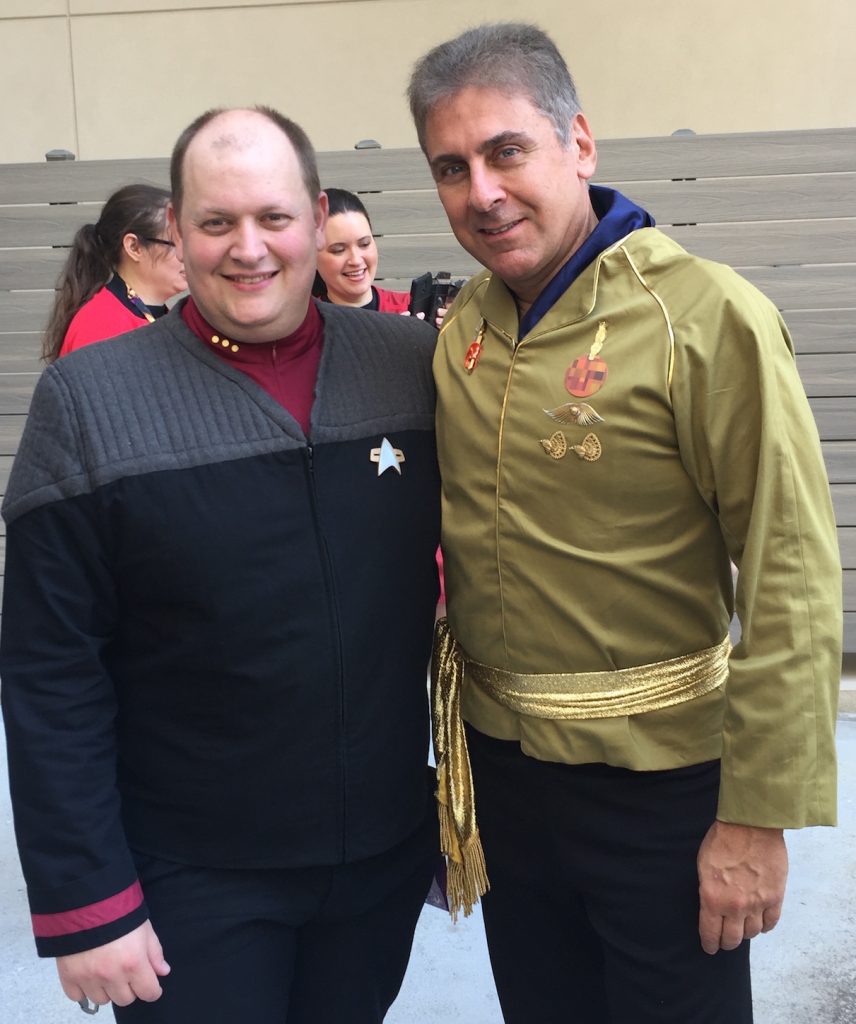 Alexander Richardson has become a mainstay of the Axanar art department.  His amazing work on LCARS and the bridge consoles is a driving force in bringing Axanar to life.  We asked Alexander (known as Sandy to his friends) a few questions…

If I think back far enough, I think what got me into Trek was my Mother channel surfing one dark evening in 1990/91. We had just got a takeaway dinner ordered and were planning on enjoying the new installed cable TV. Mother flipped a few channels and settles on “The Sky Channel” which was showing the original series. At first I protested, but as we watched it, the storyline intrigued me more and more. I then started watching it semi regularly. Then I discovered The Next Generation. I was hooked from then on. So yeah, it was a newly installed cable TV system and a bag of chips that got me into Star Trek!

I first heard of it when I stumbled across Prelude. I saw it and my jaw smacked off my desk in awe. I wished there and then I had contributed somehow as I knew this was onto something amazing. Up until that point I really was not into the Fan Film scene, the shoddy sets and terrible acting put me off. But Prelude was something different.  This was Trek that I wanted to see.

I first met Alec in person at DragonCon in 2015. Before that he had stumbled across my graphics blog and had asked me to take part in the art department of the Axanar feature. Of course I said yes, Prelude was still fresh in my mind. When I heard he was going to be at DragonCon, I knew I had to meet him and congratulate him on Prelude. We met up for lunch just before the Axanar panel. At no point did it feel like we had never met before. His enthusiasm for all things Trek is infectious. He even stood and waited for me as I has misjudged the time it would take me to get to the rendezvous spot. At DragonCon, it takes forever to get anywhere. I was a good 15 minutes late, but he waited. I’ve had good friends ditch the waiting after 5 minutes! I value his friendship and will always remember my first Axanar panel and the first evening I spent with him. Chocolate Nachos!  It’s totally a thing.

I’ve been doing LCARS graphics for about 10 years, about 5 years or so ago, I setup a wordpress blog to show off my work, mainly revolving around MSDs (Master Systems Displays), but with more detail in them than you saw on the shows, as the intent was for people to enjoy searching them for all the details. We Trek fans do love details!  Anyway, Alec must have stumbled onto my blog one day as I found an e-mail from him waiting for me one afternoon and he had invited me to design some stuff and see if I made the cut to be in the Art Dept for the Axanar feature film. After many, many iterations of console designs, I think I impressed him enough as I was made an official artist for Axanar and haven’t looked back.

5)    What was your favorite memory of working on Axanar so far?

If I’m totally honest, my favorite memory so far is seeing the panels I designed and drew up installed and partially test lit on a console. They looked magnificent, even if only a test design. I’m hoping we get to see them in some detail in one of the shorts. Every button has a function. They aren’t just randomly numbered or tagged!

6)    How do you feel about Axanar now having to be two 15 minute episodes rather than a feature film?

I would be lying if I didn’t say I was disappointed. Of course I am. But I would rather we got those two 15 minute episodes than nothing at all. At least with those, some of the love and devotion we have put into Axanar will be seen! The latest script works well in this format. I think people will enjoy it just as much as they did Prelude.

What is there not to love about working on Axanar? The people involved are good people, very talented and big Trek fans who really love to create and contribute. I guess, the satisfaction of seeing something I designed and drew be green lighted for use on screen is what I love most. Working with all these talented and cool people is a joy.

I’d like Axanar to be remembered as the fan film that was so promising, it captured the imaginations of many Trek Fans. I’d also like it to be remembered as a production that delivered the kind of Star Trek that fans have been longing for.  Well, that is how I will remember it.

And here is one of Alexander’s bridge consoles:

Thanks to Alexander for all of his hard work!