AXANAR completes its first shoot – why it matters

For the past almost-four years, I’ve been asked the same question over and over again: “Why do you stick with ALEC PETERS?” The reasons they give for me turning my back on him are numerous: he’s a con-man, he’s incompetent, he’s not a nice person, no one will work with him, he’ll stab you in the back, he’ll never make AXANAR, you’re wasting your time on this loser…the list goes on and on.

Earlier this summer, someone even offered me actual money to walk away from Alec (and pretty decent money at that!) in the form of an “investment” to help take Fan Film Factor to the next level. All I had to do was stop defending Alec Peters, make Interlude without him, and stop providing coverage of Axanar on my blog. It was a serious offer from someone with the funds to make good on it, and sincerely proffered. I refused. (And no, I won’t tell you who made the offer, so don’t ask.)

When you believe in something—a person, a thing, a dream—and someone else doesn’t, it’s hard to connect with them to convey just how important it is to you…how deeply you love it and are committed to it. It happens all the time with religion and politics…and with me, it happened with Star Trek, with fan films, and most deeply with Axanar.

I fell in love with Axanar, with the pocket universe within Star Trek that it created. It didn’t matter whether or not it was “canon”; it was canon to me. And I wanted to see more. CBS and Paramount almost took that away from me and from other Axanar supporters, but we never lost hope. We believed—we KNEW—this weekend would someday arrive. And now that it did, everything has changed. 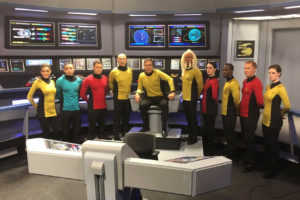 It’s not simply that Alec Peters put $50K of his own money into making this past weekend’s 3-day shoot happen. Anyone with enough money can throw dollars at a fan film project…crowd-funded or not. But the bar for Alec Peters—whether fairly or unfairly—has always been set higher because he carries with him not only supporters with high hopes but also detractors with all of those criticisms I listed above.

But in the end, it’s hard to argue with what your eyes have seen and your ears have heard. And thanks to a battalion of folks with cameras and camera phones livestreaming all weekend, we have now seen the facts and the hard evidence that:

And while I agree with Director PAUL JENKINS, whom I quoted at the top of this blog, that this is only the beginning and what matters is FINISHING Axanar, I must point out that today was still very significant because you can’t ever finish what you don’t start. Every minute of this weekend, every second of footage shot, every interview, every podcast and video update, every smile and laugh and cheer…that is all “money in the bank” now. No one can ever take away or erase what happened this weekend.

Now sure, the “go to” argument from the detractors this weekend has quickly switched from “Will he ever start it?” to “But can he FINISH it?” And hey, bring it on! Paul Jenkins is right there with you. But what’s changed is that those other old detractor claims that “no one will work with Alec Peters” or “he’s incompetent” are now patently disproven. Those buckets won’t ever carry water anymore. The videos I’ve posted over the last three days (including those below) don’t show stressed, miserable people laboring under a despotic ogre. The interviews that will appear on the Blu-Ray extras will show people as committed to the Axanar dream, as committed to Alec Peters, as I’ve been for the past five and a half years (I actually got on board in early 2014!).

Before I present the videos from Sunday’s final day of filming the first shoot of Axanar, I’d like to share with you something that Ares Studio volunteer REECE WATKINS wrote to me in a private messenger chat about the weekend and Alec…

Have you ever been part of a volunteer event over a weekend? School, Church, Scouts, anything like that? Where everyone starts out enthusiastic, but then the chaos starts, and some things go wrong, and by Sunday, even your good friends are getting on your nerves?

That didn’t happen here. Alec was busy as hell, but he never once lost his cool and unloaded on someone. And it was infectious. Sure, everyone was exhausted each night, but they showed right back up the next day with the same energy.

Alec deserves a lot more credit than he’s getting. I’ve been a Scoutmaster, and I’ve had those frazzled Sunday afternoons all too often. It takes real strength of character NOT to bite someone’s head off when they’ve packed the trailer wrong or thrown out equipment and kept trash.

My point is that most of the projects run by “One Big Guy” that I’ve followed in the past had a cranky tyrant at the top, and once you met them face-to-face, the illusion was shattered. Alec isn’t like that. Sure he’s stubborn and opinionated, but he doesn’t ever treat people like shit that don’t deserve it. That’s leadership, and it’s all too rare in this world.

Now you’d expect the longtime fans to sing his praises and overlook any abuse, but it was also the new people and the non-Trekkies that had nothing but good things to say about the whole shoot. They had zero incentive to kiss Alec’s ass. But on every single interview Keith M. Sedor did with the actors, crew, or volunteers, the praise was unanimous.

I think this is a big part of the message that needs to go out to the fans. Axanar is very much alive, and yes, it’s taken a while for all the right people, places, and other pieces to fall into place, but the magic is still there. Just like it was before the lawsuit—if not better. And yes, I’d tell you guys if things had tanked this weekend. They didn’t. Not even close.

I really wish you all had been there to experience it. Trust me, when you see the first footage come through, you’ll instantly know you backed the right side for these past five years.

I know I backed the right side, Reece—and the right person. And now, let’s take a look at the videos from Day Three…

And of course, here’s the three  livestreams of the day. The first is compliments of JP POOL of Egotastic Funtime…

And another from JP…

And finally, doing a great interview with the actor playing Captain Robert April along with answering a slew of viewer comments, is super Axafan TREY McELWAIN. Play us out, Trey…