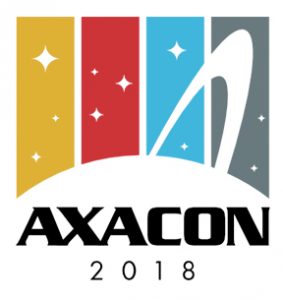 It’s official!
SphinxCon to Host Axacon!
Atlanta, GA June 19, 2018 – The Manticore Company, LTD (TMCL) and Axanar Productions are pleased to announce that TMCL’s newest convention, SphinxCon will include Axanar Productions’ Axacon as a unique, “convention-in-a-convention” on November 2 – 4, 2018 at the Crowne Plaza Atlanta Airport.
SphinxCon is the newest intimate Literary Military Science Fiction and Fantasy Convention in Atlanta. It is the Annual Convention of The Royal Manticoran Navy: The Official Honor Harrington Fan Association. Axacon is the official convention of Axanar, the Star Trek fan film dubbed “The Ultimate Fan Film” by Newsweek magazine.
SphinxCon will provide Axacon with a dedicated space for their panels and events. In return, Axacon will bring in additional guests as well as a display of various television and movie props from Axanar Productions’ CEO, Alec Peters’ personal collection. Peters is known throughout the sci-fi world as a collector of screen-used props from a variety of science fiction franchises, most notably Star Trek.
“When Alec made the proposal for us to host Axacon, it made perfect sense” according to David Weiner, Convention Chairman for SphinxCon. “We had already come to an agreement with Alec to offer a private tour of the Axanar sets at OWC Studios to our Manticore Premier members and Convention guests, so when he proposed adding Axacon as a ‘convention-in-a-convention’, everyone thought it would be a win-win”.
Alec Peters was equally enthusiastic. “I read the first three Honor Harrington books when doing research for Axanar and love the universe. The chance to host Axacon with SphinxCon is really fantastic for fans. I think there will be a lot of crossover as fans of one franchise discover the other. “
# # #
ABOUT THE ROYAL MANTICORAN NAVY: THE OFFICIAL HONOR HARRINGTON FAN ASSOCIATION AND SPHINXCON
In 2007, two fans of David Weber’s epic Honor Harrington military science fiction series started The Royal Manticoran Navy. In 2009, the group met with author David Weber, who was so impressed with the group that The Royal Manticoran Navy: The Official Honor Harrington Fan Association was created in February of 2011. With the successful national conventions HonorCon in South Carolina, and MantiCon in Minnesota, The Royal Manticoran Navy: The Official Honor Harrington Fan Association decided to continue the tradition in Atlanta (the home of Dragon*Con and a plethora of other fantasy and sci-fi fan conventions throughout the year). With it’s beautiful fall weather, Atlanta is the perfect location for a fall convention and the convention is proud to host David and Sharon Weber renew their wedding vows!
ABOUT AXANAR PRODUCTIONS AND AXACON
Axanar Productions, operating out of the OWC Studios in Lawrenceville, GA, is the brainchild of Alec Peters, a noted sci-fi props expert and collector. The group’s first production, “Prelude to Axanar”, has won 46 film festival awards and the love and respect of Star Trek fans around the world. Now the Axanar team is in pre-production on its next two installments in “The Four Years War” series, and will be sharing with fans what to expect. During the SphinxCon/Axacon event, Axanar actors, production team and crew will be doing panels, meet and greets and autograph signings.