Fan Film Friday – TREK: ISOLATION spins off from STARSHIP FARRAGUT and releases its first series episode “Out of the Fire”! 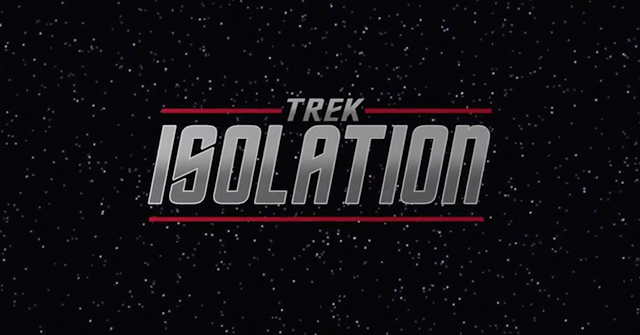 TREK ISOLATION, the long-awaited spin-off fan series to the long-running and celebrated Starship Farragut, is finally here with its first series episode “Out of the Fire.“

Technically, Trek Isolation has been “here” for a couple of years already.  The series first debuted in late 2014 with a short prelude vignette titled “Change in Command.”  During the 5-minute fan film, Captain Jack Carter (played by co-writer and Starship Farragut show-runner/star John Broughton) informs his chief of security (played by co-writer Eric Moran) that the lieutenant commander will be getting a promotion and reassignment as first officer and science officer aboard the USS Babylon.

Six months later, the Trek Isolation team SHOCKED fans when it released its second prelude vignette “A Great Responsibility“ featuring none other than Marvel Comics legend STAN LEE as a Starfleet Admiral!  And it wasn’t just a brief cameo, as happens in so many Marvel movies.  Instead, Stan does a two and a half minute scene as part of this four and a half minute fan production as he assigns Captain Hawkins (played by co-writer Dave Turner) as the new commander of the USS Babylon.

Both short films showed promise, but fans would have to wait nearly sixteen more months for the debut of the actual Trek Isolation fan series.  In that time, the new fan film guidelines were released, but the new series seems to be following them so far.  Of course, if it is a series and Trek Isolation releases subsequent episodes with the same characters and settings, this new fan production could be raising a red flag with the studios because the first guideline states, “…no additional seasons, episodes, parts, sequels or remakes.”

But hopefully, like the producers at Potemkin Pictures who are making ongoing fan series that follow all of the guidelines except the “no additional seasons or episodes” one, Trek Isolation won’t be getting a call or an e-mail from CBS or Paramount.

It should be noted that Eric Moran and company are also planning to do a separate fan series called Dark Isolation.  Following in the strategy of Renegades to eliminate all direct Star Trek references and only be “inspired by” Star Trek but, Dark Isolation will not technically be Star Trek and therefore remain immune from the guidelines for the moment.  At the same time, Trek Isolation will continue to make new episodes, as well…but under the restrictions of the fan film guidelines.  It’ll be interesting to see what happens!

In the meantime, Trek Isolation‘s first full episode, which is still branded as Starship Farragut as well as Trek Isolation (and directed by Farragut‘s John Broughton) is now available for viewing.  With a pretty obvious nod to Monthy Python and ample roles for Renaissance Faire cosplayers, plus some ambitious physical stunts, the six-and-a-half minute short film is fun to watch, well acted and directed for a fan production, and a good kick-off for the new series…assuming we get more episodes (which I sincerely hope we do).

You can view “Out of the Fire” by clicking here.

Also, you can read the entire history of Trek Isolation‘s parent series, Starship Farragut, in this 3-part feature.