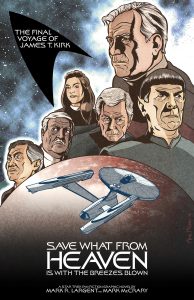 Mark gained notoriety as the creator of the hilarious STALLED TREK series of 3D-animated Trek parodies using puppet/muppet versions of our favorite characters.  The first Stalled Trek was the 15-minute episode “Amutt Time” and the other was the award-winning “Prelude to Ax’d-We Are” (which I worked on, as well).  But before there was Stalled Trek, there was a comic book!

Well, actually, the comic book existed both before AND after Stalled Trek.  Let me explain that statement.  Back in late 1991, Mark Largent and his friend Mark McCrary both wanted to break into the comic book industry, Largent as a writer and McCary as an artist.

TNG had just aired the 2-part episode “Unification,” which featured the elder Spock trying to bring the Romulans and Vulcans back together.  A month later, Star Trek VI: The Undiscovered Country came out and looked to be the final appearance of the original TOS crew.  No one imagined that the seventh Trek feature would bring back Kirk (and the kill him off) or that Scotty would appear in a TNG episode called “Relics” a year later.

Fans might not remember that, back then, the TNG episode “Yesterday’s Enterprise” was the only hint anyone had of what happened in between the two series.  So after seeing “Unification” and then Trek VI, the two Marks decided to create a story that would fill in the missing 78-year gap of time between Trek VI and the beginning of TNG…leading up to Spock’s decision to go to Romulus and showing the final fate of James T. Kirk.  (Remember, this was years before Generations.)

Largent wrote the script, and McCary pencilled some 60-odd pages.  They created Starfleet uniforms that seemed to be a reasonable guess of what was halfway between the “monster maroons” of TOS and the jumpsuits of TNG, and the story featured most of the main TOS characters.  They photocopied the pencilled pages and mailed them to DC Comics, which was publishing Star Trek comic books at the time.  But they never heard back.

Then came the TNG episode “Relics,” and it completely screwed up their story since they had featured Scotty along with Kirk, Spock, and Bones.  Now only an “imaginary” story at best, the comic book project was abandoned—until something happened nearly a quarter century later… 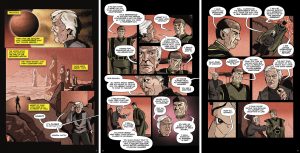 Jump ahead to March of 2015.  The two Marks were still good friends and had done other projects together in the interim,  But now they wanted to do another Trek comic book story and see if they could have it ready for the 50th anniversary of Star Trek in 2016.

“We’d been discussing story ideas for a new Star Trek fan comic,” Mark Largent told me in an interview recently, “and nothing was really landing with us.”

Mark McCrary continued, “Then, I remembered I had the pencilled pages for Save What From Heaven… somewhere, went digging, and lo and behold, found them (with the exception of about 5 pages).  What struck me as I looked at them with fresh eyes was just how well the story and pencils held up after all these years.  I thought,  We’ve got a great story written and this whole thing pencilled.  Why not just finish this and throw it online?  I ran it past Largent, he agreed to color and letter, and we were off.”

“Although I did fiddle with the script a little,” Largent said, “I tried to keep most of it true to what had originally been written.  There wasn’t even a consideration to try to make it work within Trek continuity.  I do know there was a part of the climax that we did work on changing up some, but it wasn’t a drastic change from what had been on the page originally.”

McCrary added, “I remember just how much the characters sounded, well, right.  Largent has always had a gift for dialogue and capturing the voice of individual characters.  And for a story about a bunch of old men, it moved really well.”

Speaking of old men, McCrary commented on what he’d found most difficult about the project, “Envisioning the characters as old— really old— was a challenge.  Spock wasn’t as difficult, since Vulcans are supposed to age more slowly than humans.  McCoy wasn’t that hard either; DeForest Kelly always had an old look about him anyway.  But Kirk… Kirk had to look like Kirk—not just an old man.  I didn’t want an old man with a perm running around, so I tried to keep the original series hairstyle, but thinner.

“One of the things I remember was just how difficult it was to get reference material back in 1992.  I had no online access at that point.  Compared to how the pages look now, the likenesses weren’t that great, but all things considered, they were fairly decent.  Fast forward 25 years, and when I was inking the book in 2015-2017 and needed a reference shot, all I had to do was google it or go to Netflix and find what I was looking for.  That helped with the likenesses tremendously.” 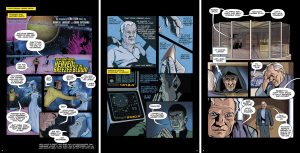 The two creators disagreed about how and when to release the comic book.  McCrary wanted to wait for the anniversary itself and then release the whole comic at one time…onto the Internet for free, of course.  No one intended on making any profit off of this labor of love.

However, Largent was so excited about the pages as they got completed that he decided to post the finished pages sporadically to a Facebook page, a few at a time, as they became ready.

“Any kind of a schedule went out the window when the real world interfered with our being able to work on it,” said Largent.  “This was the first comic I’ve colored, and it was both enjoyable and challenging…and I was probably more responsible for it taking so long!”

Ultimately, it took more than two years to complete all 62 pages, and the final few pages were posted in June of 2017.  It was a year after the anniversary, but who cares?  It’s a fantastic story and VERY professional-looking.  In fact, if I saw it on the shelf at my local comic book store, I’d think it had been released by IDW Publishing, the current comic book licensees for Star Trek.

“I’ll pat my friend on the back,” says Largent, “and point out that McCrary did an incredible job with the art, and I think the pages look fantastic.  And the response we’ve gotten from Trek fans who’ve read it has been really positive. One fan even told me that they were moved to tears at the ending. That’s a great compliment.”

Some fans might notice that neither Uhura nor Chekov appears anywhere in the comic.  McCrary explained why, “I remember in 2015 we had some discussions about the fact Chekov and Uhura weren’t in the story.  We could not remember why they had been originally left out way back in 1992.  Likely, it was because we always felt that the core of the original series was Kirk, Spock and McCoy…the “triumvirate.”  Scotty served a purpose for being in the story, as did Sulu.  I think we thought to include Chekov and Uhura would just be inserting them into the story for the sake of just inserting them in, not for the story’s sake.  Plus—honestly—drawing women had always been a challenge for me.  Nichelle Nichols is such a lovely woman; for me to draw her old and yet graceful would have been a challenge.  Had we been looking at it in 1992 as a 50th anniversary tribute, we certainly would have included them, but to include them in 2015 would have required too much of a change in the script and art.  So, they were left out.

In case anyone is curious, the full title, Save What from Heaven Is with the Breezes Blown, is from the fourth stanza of a poem by John Keats, Ode to a Nightingale.  “A poem about mortality,” explained Largent, “the nightingale of the poem dies but lives on it its song.  I had read the poem in lit class in 1988 and had written that particular line down, thinking it might make a good (albeit clumsily long) title for a story.”

If you’d like to enjoy this entire 62-page imaginary/alternate universe/call-it-what-you-will
tale of the final voyage of James T. Kirk, click on over to my sister blog FAN FILM FACTOR.