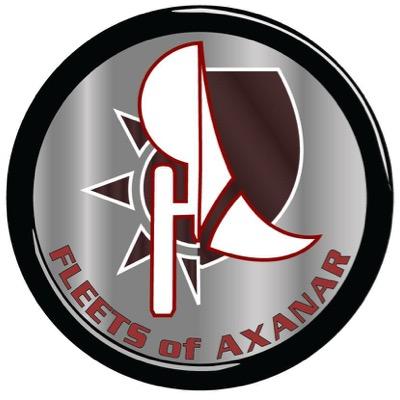 A friend once said “Axanar is a movement” and he was right.  Axanar is about a respect for Star Trek and its principles. A throwback to the Star Trek we all grew up on, whether that is TOS or the TNG era. Well, there are two groups of Star Trek fans who have taken Axanar into the gaming world.  It is a great example of what is good about Axanar and its fans.  I asked Charles Williamson, a former Navy man who created “Fleets of Axanar” in Star Trek Online to tell us about his group, which has been going for 3 and a half years.

Axanar Marines were started in Star Trek Online (STO), September 7, 2014. A few of the reasons we formed was to get the word out of the impending Axanar film, play a game together we all enjoyed, and to extend what Alec has said about, “making a better fan experience” and make a better ”player“ experience. In the last three and half years we’ve grown, joined and parted with other fleets and orgs, but maintained our original driving force of, “making a better player experience.” Another, just as important, responsibility was that we are stewards of Axanar, its reputation and by extention Alec, and are mindful that our actions will represent the aforementioned. Though we are all human and make mistakes we endeavor to uphold the mantra of a, “better player experience” by creating an environment of acceptance, support and open mindedness to all. Everyone has something to offer. The personal mantra I use is, “More people, more knowledge, more fun.” Which leads me to our mentality of the idea of “Fleets of Axanar” but, more on the big picture in a bit.

Here is the “Tale of the Tape” or in this instance Fleet Statistics for our fleets in STO. 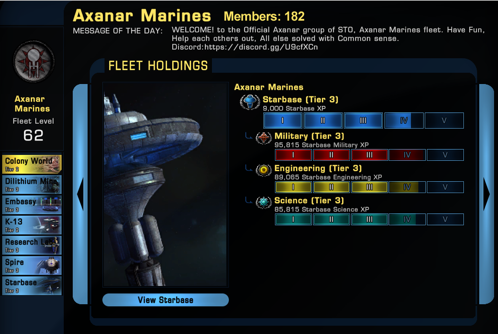 Our three guiding principles are, #1 Have fun, #2 Help each other out and have the maturity to accept the help, #3 All else will be solved with common sense. By keeping it simple it’s easier to have fun. 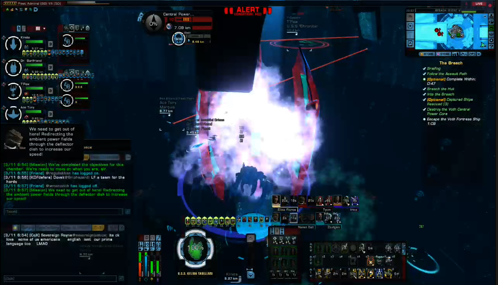 We also have another Federation fleet we are cultivating. It’s known as IstandWithAxanar RR. Once a second fleet was founded September 15, 2416. We have recommissioned it to do what others in the game wish they could, be a Romulan/Reman centric fleet. We also like the fact that we can further embody the spirit of Axanar and make the rallying cry, #IStandWithAxanar known forever. 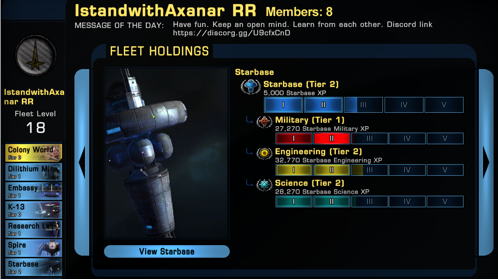 As we max out with the Axanar Marines we will put more and more attention toward our IstandWithAxanar RR.

We heard the call of the warrior and founded House of Kharn the Undying on April 16, 2415.

I spend about five plus hours a day on STO.

We also have a group of Champions Online named, O.B.E.L.I.S.K. Fleets of Axanar. Founded June 24, 2014 with 46 members. Below is an enhanced look inside the hideout. 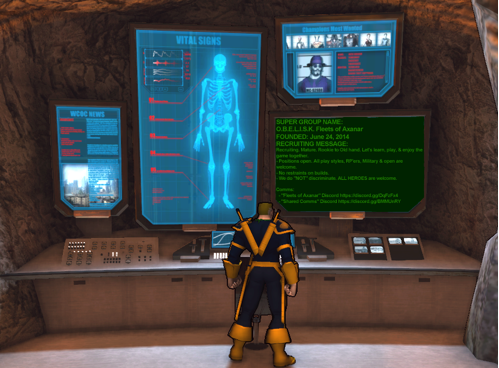 I also do creative writing via https://www.uss-ares.starfleetuk.org Founded on November 15, 2017. This Star Trek simulation is accomplished via “logs” submitted by members of the crew that have chosen positions and write their logs in character. This was set up to be four hundred years from now, 2417 and the stardate would be 94872.60 This USS Ares has the contract number NCC-13225. The number breaks down to 13000 series for the year IAW an old Star Trek RPG I used to play. The 225 represents the period of the “Four Years War” around 2250. We like to view ourselves as the TNG of Ares. Below is the main page of the website. 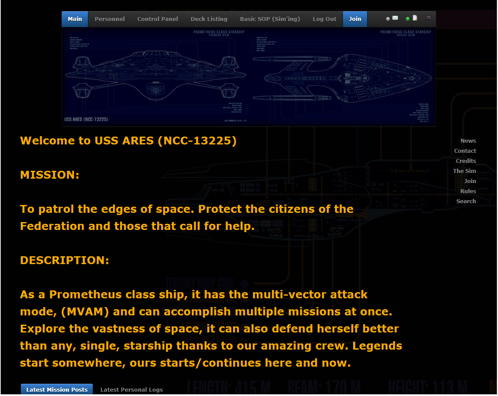 Here is a piece of the joint log called, “Some wrongs are never righted.”

“ . . . Violator’s adrenaline was up and he used focusing techniques he’d learned from Shao-lin Monks. He didn’t want to burn out before he had dealt with more of these denizens. Lance remembered the technique he’d learned from Sergio. He focused and was about to activate the time shift technique when he got an energy blast from behind. A man stood over Violator’s prone body. This was the temporal criminal Marcus. Formerly an Admiral of the 26th Century Temporal Federation. Now Captain Lance R. Violator, with over 25 years of Star Fleet service, was dead.

“Noo!” D’Vana growled launching herself at the man whom had just shot her captain in the back ready to rip him in half for injuring or worse killing her Captain. He was her captain, her responsibility she was suppose to be guarding him possibly even give her life to save his if she needed to and yet he laid prone on the ground. Her fist slammed into his face with all the rage she felt inside of her.

Lance and Xavier brutally incapacitated 20 plus Orion, 10 plus Klingons, and various cowardly Ferengi that had accidentally got in the way. . . “

That is just a small piece of the logs and simulation we do. Thankfully we’re allowed to be stewards of the Axanar name and USS Ares. As I said starting out it is an awesomely wonderfull responsibility to carry on.

Jeff Craig and I have kicked around ideas and umbrella concepts to spread the good will and name of Axanar. I’ve used the term “Fleets of Axanar” in many conversations, but it wasn’t until Jeff and “Stoggy” started using it as a blanket to cover all the ventures we participate in that it took wider meaning than just multiple fleets named Axanar in STO. We all have a piece of the “Fleets of Axanar” we all contribute. As I have said before, “One man can make a difference, but one man can’t do it all.” I’m happy to be able to game and collaborate with all these wonderfully imaginative, open minded people. But first and foremost we all have Alec to thank for the spark that started all this, “AXANAR.”

You can join the Fleets of Axanar Facebook group to start!