TRIPLE the value of your donation to the INTERLUDE GoFundMe for 24 hours during $1,000 THURSDAY (August 15) 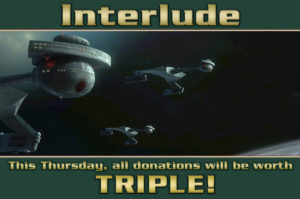 This is really exciting, folks! Last week, two of my backers for INTERLUDE approached me separately with an offer to match—dollar for dollar—any donation made to the Interlude GoFundMe during a 24-hour period that I could determine. Both backers have asked to remain anonymous, but one of them is the fan who donated $1,000 just a few days after we launched in June.

After discussing details with both of them, we came up with the following rules for this special one-day promotion:

Now, you might be wondering why they’re matching only donations of between $1 and $100 and not larger ones. We discussed this, and the reason is because both of these match-backers want this to be FUN! But if someone came along and just donated all $1,200 in one fell swoop. Then—poof!—the promotion would end…and no one else would enjoy knowing that their donation just tripled.

And why is there a $1,200 ceiling? That’s simply because that’s the amount that each of these backers was comfortable matching. I don’t want anyone going broke, y’know…and it’s a very generous offer on both of their parts.

So if you’ve been waiting to make a contribution to Interlude, THIS THURSDAY is the day to do it! And if you’ve already donated, even if you just have an extra $5 sitting around, it’ll be worth $15. If we make our maximum, we’ll hit nearly $15K…surpassing the minimum $13.5K we need by August 20 in order to film in November.

You’re also welcome to donate before or after thus Thursday, but for 24 hours, it’ll be a sprint to $1,200! Here’s the link (and I’ll post it again on Thursday, of course)…