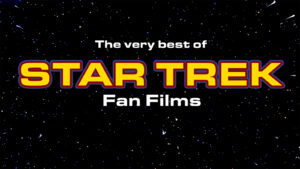 For the past two and a half years, I’ve been quietly working on a “secret” project for Star Trek fan films. I mean, it wasn’t purposefully a secret. I just never bothered to mention it to anybody…

…until now, that is.

My new video compilation, “The Very Best of Star Trek Fan Films,” will premiere this Saturday night (August 7) at 9:00 p.m. Eastern Time after the closing ceremonies of this year’s virtual TREKLANTA™ on the Holodeck mini-convention.

The idea behind this 75-minute montage was to collect what I considered to be the “best” scenes and sequences from the many, many, MANY Star Trek fan films that have been released during the last two decades or so.

First of all, what does “the best” even mean??? The best…what? Acting? Directing? Story? Visual Effects? Make-up? Costumes? Sound quality? Music? Editing? Well, yes to all of the above! But few Star Trek fan films actually check ALL of those boxes. So once again, I was left the challenge of deciding what “the best” actually means.

I ultimately created two criteria for inclusion in the video. The clips needed to (in my determination):

Once I knew what I was looking for, I needed to do a LOT of looking! That’s one of the reasons this project has taken as long as it has to complete. But I did discover something important early on. Really short clips (on the whole) don’t work. You need at least a minute or two—and sometimes even three minutes or more—to convey the power and impact of a sequence. Otherwise, you just get disjointed VFX sequences and isolated snippets of dialog that don’t really pack much of a punch. You have to give the viewer a chance to get the “flavor” of a sequence and a grasp of what is going on.

Ultimately, I ended up selecting about three dozen clips and sequences from fan films spanning the last decade and a half…for a total run-time of 75 minutes (an average of two minutes per segment). Sadly, I couldn’t include content from many of my closest friends in the fan film community. (I didn’t want this video to go on forever!) And so I sincerely apologize to anyone who didn’t make it into the final selections. It wasn’t personal, and I love you all and the wonderful work you and your teams bring to us. 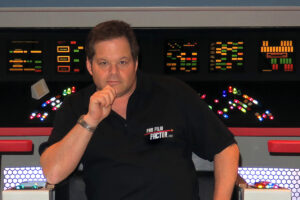 After all the selections were made, the next challenge was assembling them into an, ahem, engaging order. For a feeling of variety, I tried not to feature two TOS-era or two TNG-era or two NX-era segments back-to-back. I also attempted to group sequences thematically. For example, the video begins with some action-packed stuff. Then it slows a bit to show more emotionally dramatic character segments with powerful acting. Next I grouped all of the funny parody stuff together before finally bringing it all home it with some of the most intense stuff at the end…although everything is really strong!

Of course, I then needed to make sure to display the titles and years of production on all of the clips, and hopefully there aren’t any typos! And just to keep it looking “professional,” I smoothed out the transitions between each of the clips, making soft cross dissolves and fading the ending sounds of one segment into the beginning sounds of the next one. You’ll see what I mean when you watch it.

Finally, after nearly 30 months of work, I faced perhaps my greatest challenge: how do I end it? I mean, I could just let the final clip play and then put “The End.” But since I had created an intro, I wanted to bookend the video with an outro, as well. But what?

The answer eventually came to me, but it required asking a major favor from the Rumpelstiltskin of fan film CGI, SAMUEL COCKINGS. I wanted to end the video with what I imagined in my head to be an awesome VFX shot of as many fan film starships heading off into the distance as Sam could fit in. I somehow convinced him to agree (he’s always really busy!), but then he asked me the toughest question of all: “What music are you going to have under it? That will determine the duration of the VFX shot.”

What music, indeed! There’s lots of melodic finales in Star Trek‘s long history…played as fans watch the Enterprise or Enterprise-D or Voyager or NX-01 heading away from the viewer. Heck, there’s even snippets from the closing credits of the movies, although it couldn’t be anything too long because Sam can’t spend all his time rendering a super-long VFX shot.

No, I just needed something short that fits the concept of Star Trek and the desire of fans to push the envelope of their own final frontiers.

I told Sam, and he loved the idea, too. And so, after many hundreds of hours of work, “The Very Best of Star Trek Fan Films” video was finally finished!

And if you want to know what music I chose for the ending and what fan films and clips made the final cut, well, I guess you’ll just need to watch the video for yourself this Saturday night (August 7) at 9:00 p.m. Eastern Time at this link:

Please note that you must have a Google/Gmail account to access Treklanta events. Creating a free Google account is free and easy and doesn’t take very long. Trekalnta will be going non-stop at the above Google Meet link from 10:00 a.m. Saturday morning though 10:15 p.m when “The Very Best of Star Trek Fan Films” video concludes. So please join us. (And if you can’t make it, worry not! I’ll be posting the video to YouTube next week, as well.)