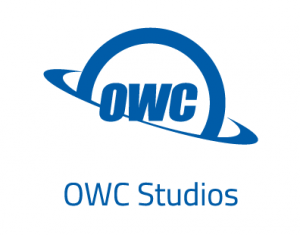 New, Georgia-based Film Production Company Announces Sponsorship with OWC
(Lawrenceville, GA) – Rocketworx, Inc., a Georgia-based, independent film production company, announced its recent sponsorship agreement with OWC, a leading zero emissions Mac and PC technology company based in Austin, TX. Rocketworx founder and CEO, Alec Peters, created and produced the Star Trek fan film PRELUDE TO AXANAR, which has won 47 film festival awards around the world.
“We want to build on the success of PRELUDE TO AXANAR and produce other great science fiction content.” explains Rocketworx’s Peters. “Opening a studio in the Atlanta market opens up many new possibilities for us – one of which is the expansion of our long-standing relationship with OWC.”
Peters and Robert Meyer Burnett, the editor of PRELUDE TO AXANAR, joined OWC at the National Association of Broadcasters (NAB) Show in Las Vegas in April to show how OWC’s drives and technology were used in creating both the short film and scenes from the yet-unfinished feature. “OWC has been with us since the very beginning,” said Peters. “And this new agreement with them will help us take our capabilities and the stories we tell to the next level.”
As part of the agreement, Rocketworx 6,000 square foot facility in Lawrenceville will be known as OWC Studios. “We’re excited to be a part of the team at Rocketworx, making great things happen,” said OWC’s Founder and CEO, Larry O’Connor.
“When you see what these guys and gals did with our equipment on AXANAR, and what they’ve produced so far, it’s easy to see why we want to remain an integral part of this company.”
Following the opening of OWC Studios in Lawrenceville, Peters will get back to work finalizing production details around the remainder of his Star Trek fan film project AXANAR. “We’re still committed to making the two, 15-minute installments of the story of Axanar and finishing telling the story of Garth of Izar and The Four Years War.” Peters explained. “We also have several other productions and co-productions in the development pipeline and OWC will be involved in all of them.”
# # #
ABOUT ROCKETWORX
Rocketworx, Inc. (Rocketworx) is an independent film production company based in Lawrenceville, GA. Focused on producing genre content in a variety of mediums, the company produces a variety of independent and fan-related projects, often working with the next generation of independent, amateur and student filmmakers interested in science fiction, horror and fantasy genres.
Follow Rocketworx on Facebook: https://www.facebook.com/TheRocketworx/
ABOUT OWC
Having served the Apple community worldwide since 1988, OWC has become the reliable manufacturer and upgrade provider of choice for Apple and PC enthusiasts with its extensive catalog of accessories, storage and memory upgrades for nearly every Mac made in the last decade. Recognized for award-winning customer service, OWC provides extensive U.S.-based technical support for Mac and PC users around the world and comprehensive step-by-step installation and support videos. For more information visit: www.owcdigital.com
Follow OWC Studios on Facebook: https://www.facebook.com/OWC-Studios-279882779138747/
(c) Copyright 2017 – Rocketworx Productions, Inc. – All rights reserved. Other World Computing and OWC are trademarks of OWC. Apple and Mac are trademarks of Apple Inc., registered in the US and other countries. Other marks may be the trademark or registered trademark property of their respective owners.
For more information contact:
Mike Bawden, BLPR
563-359-8654 – direct
563-343-0411 – mobile
mike@blprfirm.com