RED ALERT! The BJO AWARDS are in jeopardy…along with TREKLANTA and ERIC WATTS’ house! 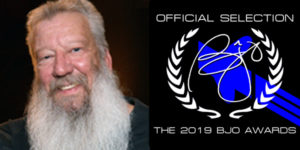 For the past nine years, ERIC L. WATTS has been chairman of the annual TREKLANTA convention, a small con in the Atlanta area that has always been very supportive of Star Trek fan films. In fact, for the last half-decade, Eric and Treklanta have hosted the annual BJO AWARDS—originally called the Independent Star Trek Fan Film Awards, and rechristened the “Bjo’s” after the woman credited with saving Star Trek from an early cancelation in 1968, BJO TRIMBLE.

Those awards, and the Treklanta convention, have been a special boon to the Star Trek fan film world, letting us celebrate—year after year—the best our community has to offer. Eric has never charged fan filmmakers a fee to register for the Bjo’s. Trek fan productions were simply included in the contest if they met the qualifications…and most did.

Eric has done so much for the fan film community. Now he needs us to do something for him…and it’s pretty much an emergency!

Treklanta has never drawn huge crowds, and that has resulted in years finishing in the red. Rather than default on commitments and risk businesses no longer willing to do business with Treklanta, Eric would pay off the shortfalls out of his own pocket, using credit cards when there was too much to cover with available funds.

As the years went on, the credit card debt piled up with Eric only able to pay the minimums and interest mounting. Eventually, just making those minimum payments delayed Eric’s ability to submit his own mortgage payments on time.

Now Eric is about to lose his home, still buried in credit card debt, all because he wanted to keep a convention going that celebrated Star Trek and its fan films.

It’s tempting to do a whole bunch of woulda/shoulda/coulda to Eric. But advice on handling things differently over the last nine years isn’t going to fix the immediate problem. Eric needs $6,000 to pay his past-due mortgage, and another $5,000 pays off the convention’s credit card.

Eric has just set up a GoFundMe campaign, and in the first 7 hours, 13 fans donated $635 (including $50 from me)…or about 6% of what he needs. There’s still a long way to go, but the news is only just beginning to make its way around fandom. Please help spread the word and, if possible, make a donation…even if it’s just a small one.

Click here to save Treklanta, the Bjos, and Eric’s house.

Once we help put out this fire, we fans can step up with some ideas to help make sure that Eric doesn’t fall down this slippery slope again (like maybe charging fan filmmakers a small $10 or $20 registration fee to enter the Bjo Awards contest). But right now, it’s all hands on deck to help someone in need.

Below is Eric’s public plea for assistance. You can tell this was not an easy video for him to make, and all the more reason to try to offer him some desperately needed assistance…