New video for THE ROMULAN WAR spotlights the ACTORS! 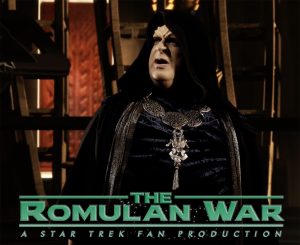 One of the most anticipated Star Trek fan films at the moment, THE ROMULAN WAR, is currently seeking $10,000 in donations from fans with an Indiegogo crowd-funding campaign.  As of today, with 19 days left, they’ve advanced more than 42% of the way toward their goal, which is awesome news.

Have you donated yet?  Have you at least helped to spread the Indiegogo link?  How it is, by the way:

Last week, I featured an 2-part interview with show-runner MARK NACCARATO, and it sure got fans talking!  One of the most interesting comments I saw was a person who wanted to donate but wasn’t sure he was going to like the acting.  After all, many Star Trek fan films can’t or don’t use trained actors, and for $10,000—well—I guess this guy really wanted trained actors.

And as it turns out, Mark’s got ’em!  (Remember that the guidelines don’t preclude using trained actors.  You simply can’t pay them as professionals.)

In fact, Mark has just released a new update video featuring interviews with four members of his cast along with brief clips of their performances (and reveals of their character names).  As Mark mentioned in his interview, 75% of the green-screen scenes for this project have already been filmed, and the $10,000 is intended primarily for post-production (sound, editing, VFX, music, etc.) as well as filming that last 25% of the scenes.

The latest video appears below.  Buckle up…