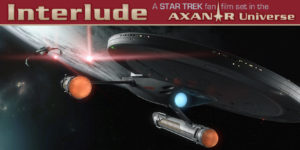 A slight change of plans for my fan film INTERLUDE, which will be set in the Axanar Universe and will be crowd-funding soon!

The majority of the fan film will be shot on the amazing bridge set of the USS ARES in Lawrenceville, GA. Initially, the plan was to film there for two days in late September and then drive down to Kingsland, GA for a third day of filming on the TOS sets at Neutral Zone Studios. There are two scenes that take place in my fan film—one in sickbay and the other in engineering—that are brief but still very important to the story.

The new plan, instead of filming in Kingsland, has the sickbay scene being shot in Arkansas at WARP 66 Studios, which is run by GLEN WOLFE and DAN REYNOLDS. Those TOS sets have been used for episodes of THE FEDERATION FILES as well as recent Avalon Universe productions from my Interlude directors JOSHUA IRWIN and VICTORIA FOX. In fact, Josh and Victoria live relatively close to Glen and Dan, so the change of location actually makes things quite a bit more convenient for them.

It also trims about $1,000 or so from our budget…YAY! Without the need to drive 5 hours across Georgia, I won’t have to rent a car in Atlanta for the weekend. Plus, we won’t need three or four hotel rooms in Kingsland for the night.

Glen is already coming up with ideas for altering his TOS sickbay set into looking more like the earlier sickbay from the second Star Trek pilot “Where No Man Has Gone Before.” If so, that’d be totally AWESOME(!!!), since Interlude takes place during the Four Years War, two decades before Kirk’s 5-year mission. So Glen has my undying appreciation (that’s a subtle Kharn reference for all those Axanerds out there)!

In the meantime, I’ve been working hard on a really fun “ask” video for the crowd-funding campaign, which will launch in just a couple of weeks! The opening VFX sequence is being scored right now, and I can’t wait to share it with all of you. My team is excited, I’m REALLY excited, and I hope that soon you’ll be just as excited, too!