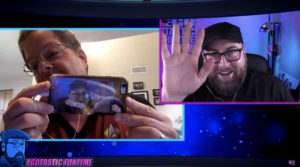 There’s a LOT of video podcasts out there, and one of my favorites (and I’m not just saying that!) is EGOTASTIC FUNTIME. The host, JP, is really funny, lively, insightful, and of course, a total geek. He covers The Orville, Star Trek, the latest blockbuster movies, video games, and whatever water cooler geek-news is out there at the moment. He edits his videos very well, cutting out the pauses and “ums” so you get one of those short ‘n’ choppy viewing experiences that can save you a lot of viewing time. (Now, if only certain bloggers could learn to be just as pithy…but we all have our mountains to climb, folks!)

Anyway, JP has recently expanded his offerings to include what he’s calling “Egotastic Talks” (I would have called them “FunTalks”…but that’s just me.) Last week, he premiered the new format with an 18-minute podcast featuring ALEC PETERS discussing both AXANAR news and Alec’s exciting online auction for the Trekcetera Museum collection. And this week, JP’s second guest was none other than the guy typing out this blog: me.

Naturally, the subject of the interview would be my Axanar Universe fan film INTERLUDE. The challenge at this point in a campaign (at all points really) is finding ways to spread the word beyond people who already know about it. I’d been working with JP for a number of weeks trying to set up an opportunity to appear on his podcast, as he has over 22K subscribers. In fact, in the two days since the video got posted, it’s been viewed more than two thousand times!

This has translated into upwards of $350 in new donations to the GoFundMe campaign since Monday. Things had slowed down prior to that, but it wasn’t too concerning, as I’ve been planning for the big THOUSAND DOLLAR THURSDAY (tomorrow) when all donations will be tripled. So I hadn’t been pushing the campaign as much as I usually did over the past seven days in order to focus more donations towards this Thursday.

Speaking of which, Thousand Dollar Thursday is going to have a “tote board” progress report, of sorts, as I track the donations throughout the day…hoping to reach our target of $1200 for the day. Here’s the GoFundMe link again (if you haven’t already committed it to memory):

In the meantime, check out my appearance on Egotastic Funtime below. It was an hour-long chat that JP edited down to 29 minutes, so there’s a couple of “jumps” in the conversation flow, but it’s still a fun little chat and worth a listen…