INTERLUDE intro: “getting from there to here” – Sound FX! 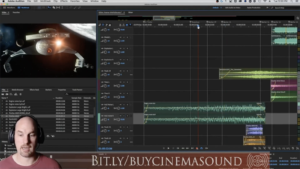 If you liked last week’s blog about the previs that went into the opening 19-second VFX sequence for my Axanar Universe fan film INTERLUDE, then you’re probably going to find this week’s blog just as fascinating.

But first, a reminder to please donate to our GoFundMe campaign (we’re nearly halfway to our $19.5K goal—just cracked $8.7K!)…

Okay, let’s get this blog rolling!

I really feel like I’m walking with giants. This is totally my first rodeo. I’ve never executive produced a fan film (or any film) before. BUT!!! Through goodwill, good fortune, good nature, or just blind luck, I’ve managed to attract some incredibly skilled and experienced people to direct, produce, do casting, create visual FX, and take on other important tasks to make Interlude amazing. And isn’t that what fan films are all about—bringing together people who love Star Trek?

Three of those tasks were still required for completing the opening sequence for Interlude. My CGI guy, LEWIS ANDERSON (not his real name), had already produced this amazing VFX masterpiece…

But of course, there was no sound yet. We still needed music, sound effects, and someone to mix them together so that the music didn’t overwhelm the sounds of the engines/torpedoes/explosions…and also vice versa. These three tasks were the job of two of my “giants”: KEVIN CROXTON and MARK EDWARD LEWIS.

Kevin is a musical composer who has won an Emmy Award (and yes, I will say that over and over and over again!) and now teaches music in Arkansas. Last year, he wrote and directed the musical Star Trek fan film THE BUNNY INCIDENT starring his 4th and 5th grade music students.

Mark was the sound-mixer on PRELUDE TO AXANAR. He also did editing and sound-mixing on two episodes of Star Trek: New Voyages (plus dozens of other independent films and shorts), and will be doing the editing for the upcoming Axanar sequels. Mark has access to all of the original sound effects for Prelude, and he was happy to mix them into my fan film, too.

The only question now was kind of a chicken-and-egg one: who works on the opening sequence next? Does Kevin write the music first, or does Mark add the sound effects first?

Apparently, you can do it either way. But Kevin requested, if Mark didn’t mind, that Mark add the sound effects first. That way, Kevin could compose his music specifically to allow for more or less volume in certain places as the other noises rose and fell.

Mark was fine with that, so the plan now was for Mark to do the sound effects first, Kevin would then compose the music, and finally Mark would mix everything together for a perfect balance. And I would just get out of the way and let these two maestros work their magic. (Well, not entirely. But more on that next week.)

Before Mark tackled my project, however, he asked me for a favor. Granted, Mark was already doing me a MAJOR favor…as he usually gets paid the really big bucks, and CBS says I can’t pay anyone. So pretty much, whatever Mark was gonna ask me, the answer was almost certainly gonna be a “Yes!”

Mark wanted to work on my project LIVE (virtually) in front of his students, showing them the process of actually adding sound FX for a client’s project as he did it, and I was invited to watch, as well. Not only that, but Mark said I could post the video here on Fan Film Factor to share with all of you. HOW AWESOME IS THAT????

By the way, when I say “students,” I mean the members of his Cinema Sound Education and Resource Group. Joining is free and gets your foot in the door to access countless articles and purchase 85 hours of video tutorials, lectures, and secrets of the audio-for-film industry. Authored and presented by Mark Edward Lewis and produced by education provider MZed, Cinema Sound is committed to supporting independent media creatives by teaching skills that enhance their production so much that they can compete with Hollywood big-budgeted projects. If you’re into doing sound for your projects and want to take your skills to the next level, you should check them out. (Yep, free plug! But seriously, if you’re into audio production, check them out.)

Anyway, Mark wanted to teach his members through example, working on my project for two hours, live, explaining all the steps while using Adobe Audition (one of the industry standard tools for smaller projects not requiring more than 50 audio channels).

At my request, Mark was able to set up a private stream on Facebook, inviting only the members of the Cinema Sound group. That way, I could still unveil my opening VFX sequence the following month without it having sat publicly on YouTube for five weeks.

What you’re about to see is—at least in my opinion—absolutely fascinating! You literally get to watch, step by step, as sound effects are added to my VFX video. It’s kinda like watching one of those PBS painting shows where the artist keeps adding things, and each time he paints a new tree or adds snow to a mountain or a reflection to a lake, you say, “Oh, that’s perfect! You can totally stop painting now.” And then he adds something else, and you say, “Holy crap…that’s even better! Okay, now you can stop.” And he keeps adding stuff for the next half hour, and it looks better each time.

I’ve included the full video, but if you want to save yourself some time, you can jump in at the 1:05 minute point where the cool stuff starts and watch for 30 minutes…or however long you’d like. Or you can just jump around. I think it’s all really cool!

Next week, the third and final part, as we add the music!