FOR THE LOVE OF SPOCK – a short review and a cool video of ADAM NIMOY’S talk in Hollywood! 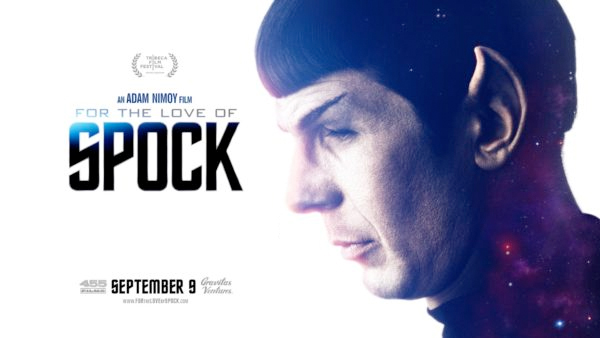 You might not consider the new “Spockumentary” from Adam Nimoy to be a typical fan film, but I think it very much qualifies.  Sure, it might not have needed to follow the fan film guidelines, but FOR THE LOVE OF SPOCK still managed to raise more than $662,000 from nearly 10,000 fans!  It was, for all intents and purposes, a labor of love and a product of love…not just of a son for his father but also of fans for a beloved character and actor.

As Adam Nimoy explains in the opening of the film, the original idea had simply been to produce a documentary film to be released for the 50th anniversary of Star Trek, looking at the origins and the impact of the character of Mr. Spock on society and culture.  Adam’s father, actor Leonard Nimoy, insisted the film be only about the character and not the actor himself.  Leonard was always very humble and felt that his own life was hardly worthy of a full documentary–or even part of one.  So Adam agreed to focus his film exclusively on the character of Spock and not on the actor who played him.  The two Nimoys began their work.

And then Leonard Nimoy died.

This left Adam emotionally impacted, and he no longer wanted to create a film simply about the character of Spock.  With his father now gone and the world in mourning, Adam decided that, yes, this would still be a film about Spock but also about the man under the ears and eyebrows…his noble qualities as well as his shortcomings.  This film would look at how Leonard Nimoy grew and evolved over an amazing lifetime that included creating this amazing character but also touched on so much more…and not all of it good. 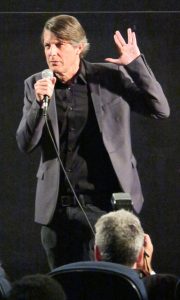 For fans simply craving yet another documentary about Star Trek, this isn’t it.  In fact, the friend I saw it with this evening at the historic Egyptian Theater in Hollywood commented to me afterward that, while she liked the film a lot, she felt there was too much of the personal dynamics between Leonard and his family, and the problems his son Adam experienced that moved him to cut all ties with his father.  She wanted more Star Trek.

“But don’t we know everything about Star Trek already?” I asked her.  “There are so many documentaries out there on the making of Star Trek and its impact.  Were this documentary just more of the same, I don’t think I’d care as much about it…or about Leonard and Adam and their families.”

The film walked a fine line, trying to find a balance between showing us the person Leonard was when he was not Spock and feeding us Trekkies all the tasty behind-the-scenes gossip and footage from Star Trek (there’s about a half hour of clips–very appropriately placed to match the narrative–from TOS and the movies). 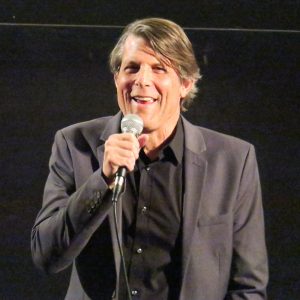 All photos taken by me (Jonathan Lane) during Adam’s talk last night before the screening at the Egyptian Theater in Hollywood.

So if you want to see just the inside stories on filming the TOS episodes, then watch the first 45 minutes or so and turn it off.  Or stick around for clips of conventions and the Bilbo Baggins music video (of course it’s in there!).  But you’ll miss so much if you skip what happened after Trek was canceled.

For obvious reasons, the film has less Trek after we hit the early 70’s, but we still dip into the animated series (with great segments of interviews with George Takei, Walter Koenig, and Nichelle Nichols) and inevitably, the feature films, as well.  Indeed, we are also treated to interviews with Nicolas Meyer, J.J. Abrams, and many of the reboot cast including Simon Pegg, Karl Urban, Zoe Saldana, and of course, Zachary Quinto.  We also get Leonard Nimoy’s daughter Julie, his brother and sister-in-law, and Adam Nimoy as well.

Adam has some difficult things to share that I’ve heard some critics say were self-indulgent or distracting from the main focus of the film.  I disagree wholeheartedly!  I think Leonard’s effect on his son, and Adam’s prodigal journey both away from his father and ultimately back again complete the narrative of Leonard himself.  Both men suffered from substance abuse, and both men overcame their addictions with great difficulty.  But their efforts allowed them to find their way back to each other, older and wiser, and enjoy a close connection for the final five years of the elder Nimoy’s life. 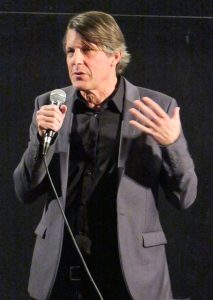 The film ends with an amazing and touching scene that occurred at–of all places!–the 2015 Burning Man festival in Nevada.  I teared up as I watched it, and I saw a bunch of other people in the audience doing the same.

As the final credits rolled to a cover of the tune “Starman” (originally by David Bowie), I felt very satisfied, having seen a truly touching and enlightening piece of work.  And “work” is a very appropriate term, as this did not feel at all like something just thrown together, full of clips and photos and voice-overs and interview segments (and even a few visual effects) assembled haphazardly.  This film flowed.  It told a story with a beginning, middle, and bittersweet ending.  An original score performed by a full orchestra gave the documentary an even richer and fuller feel overall, and of course, there were enough Star Trek clips to keep any fan happy.  And what’s more, thanks to a producer who knows TOS as well as any of us, those clips aren’t random.  They each fit perfectly into whatever is being talked about at any particular moment. 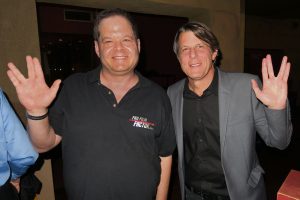 “I’m not just a fan; I’m a donor!” Jonathan Lane (me) with Adam Nimoy…who was nice enough to stay after the screening signing countless autographs an taking photos with any fan who wanted one. (Photo taken by Joanna Minerbi.)

So, my friends, I highly recommend you take two hours to see, enjoy, and truly experience this love letter not only to Mr. Spock but also to the great Mr. Leonard Nimoy.  It’s truly a MUST-SEE fan film, and yes, it is a fan film–funded by fans and made by fans for fans.  It just so happens that the main fan is the son of the incredible person whom the film is about.

So for the love of Spock, either go to a theater and see this film or purchase a copy either on demand or on DVD/Blu-ray at their website.

And as a bonus feature, here’s Adam Nimoy’s talk that he gave last night at Hollywood’s historic Egyptian Theater (please forgive the camera shakes–my “tripod” was my elbows on the armrests):