Fan Film Wednesday – Reason #3 to donate to the AVALON GoFundMe: THE TEAM 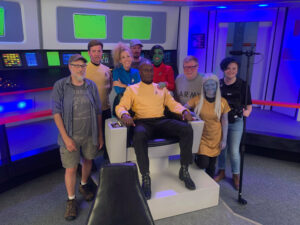 Fan films are like weddings. (Ha, got your attention!)

Think about it. Weddings can be as cheap and simple as a trip to City Hall or a few friends in the backyard. Or they can be expensive galas with hundreds of guests and all the trimmings. Or they can be anywhere in between.

And so it is with fan films. We get everything from cardboard sets and scenes shot with cell phones to professional-looking productions with trained actors, meticulous sets and costumes, top-quality recording equipment, and budgets into the five-figure range and sometimes even beyond that. 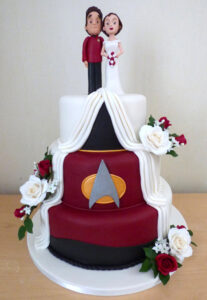 In general, the larger and more ambitious the wedding, the more critical it is that a team of planners and managers be involved to make sure everything goes smoothly. You get one chance at the actual ceremony, and it’s all that the behind-the-scenes planning that can determine if the wedding is a triumph or a disaster.

The AVALON UNIVERSE fan films aren’t exactly Kardashian weddings (thank goodness!), but they are still pretty impressive, with production quality a few steps above the majority of Star Trek fan films out there. This is not meant to diminish those other fan films. All fan filmmakers deserve support and encouragement. But when you donate to an Avalon Universe crowd-funding campaign, you know your money will be well-spent, and the finished product will look and sound and be amazing.

Oh, and speaking of donating, Avalon has a crowd-funding campaign going on right now, if you’d like to back it…

Like a successful wedding, a well-run fan production requires careful planning and preparation, and that means having the right people in the right jobs…not just during the shoots but in the months and weeks leading up to the director yelling “Action!” for the first time.

As I mentioned last week, I wasn’t initially planning to be part of “Team Avalon,” even though I consider Avalon Universe director/showrunner JOSHUA IRWIN to be a close friend. (Josh was my Director of Photography and Editor on INTERLUDE.) What I did offer to do was to advise Josh and his producer, PIXI NEREID, on strategies for crowd-funding…advice I’ve also offered to other fan filmmakers over the years.

But before I knew it, Pixi had jumped into action, adding me to the production crew’s Facebook chat, giving me access to their Slack productivity app account where the cast and crew keep all of their online resources, and inviting me onto the kick-off production meeting Zoom call. So that’s how I became a part of “Team Avalon,” and it’s given me a fascinating look into who these fine folks are and all that they’re doing to make the wedding…er, fan film extra spectacular and go off without a hitch.

Let me tell you about the team… 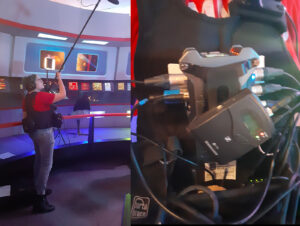 Beck Hale and her audio equipment

Obviously, there are all the technical people who help keep Avalon looking and sounding good. These are folks like EARL HALE, who makes sure that you can hear everyone’s voice and that it doesn’t sound like they’re talking from the other side of a large, empty room or standing in a wind storm. And Earl’s daughter, BECK HALE, has been helping her father with boom mics since she’s been able to hold one. Sound quality is actually one of the most important elements of film-making…even more so than video quality. (And if you don’t believe it, this short video will convince you.) So if you want an awesome fan film, you really need an awesome Audiographer sound guy…or gal…or one of each!

Of course, even though sound quality is ultimately more important than video quality, it’s best if you can have both. During the previous Avalon releases, Josh Irwin filled that role of Director of Photography. The DP is the visual artist who “paints with light,” as Josh calls it…and he did an amazing job with the previous Avalon fan films and also with Interlude. But now Josh is moving into the solo position of Director, and he wants to concentrate exclusively on that demanding job, trusting someone else to frame the shots and handle the camera and lighting.

So Josh has asked his friend of 30 years, NEAL BILBE, to be the new Director of Photography on Team Avalon. Josh and Neal went to film school together, but then their careers went in intriguingly different directions. “While I got a lot more aggressive trying to be a filmmaker,” explains Josh, “Neal took a job as the Chief Engineer at the Fayetteville Government Channel, which also shares a facility with the local public access channel. The place was a complete dump when he started: Commodore 64 computers, an old video switcher from the 1970s, all obsolete junk. He scrapped basically everything and built a new studio from the ground up. He constantly keeps it up to date. The facility honestly is better than any of the commercial television stations in the market.” 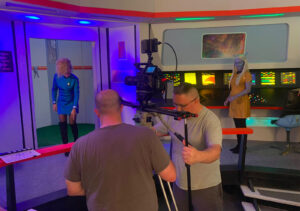 Neal Bilbe in the light gray shirt with Josh in the dark gray…apparently, only Starfleet officers are allowed to wear colorful clothing!

After working with Neal on a number of non-Trek film projects, Josh brought his childhood friend to be DP on the just-released COSMIC STREAM. “That film is really beautiful,” says Josh, “and it’s because he took a different approach. He and I are truly the Odd Couple. He has a very clean, pristine way of doing things, whereas I’m very rough and tumble doing gorilla filmmaking all the time. When we work on films together, he does a lot of the smooth tripod camera work, and if the shot requires something handheld, I usually do the camera work…at least for now. We are hoping to grow the team, so that I never have to touch the camera.”

But Josh’s work doesn’t end when filming wraps…if fact, it’s just getting started! When it comes time for post-production, Josh will be in the driver’s seat because his skills as an editor are top-notch. And since the editor works closely with the director as the film is cut together, and since Josh is both director and editor, post production will certainly go quickly and smoothly (unless Josh develops multiple personality disorder and begins arguing with himself).

Also involved in the post-production phase is the Grand Poobah of grand CGI sequences, SAMUEL COCKINGS, who gives the VFX of any fan film he works on a level of polish that’s simply uncanny. And last but certainly not least, composer ADMAM MULLEN has created the music for a ridiculously huge number of Star Trek fan films and audio dramas (including the vast majority of fan films featuring VANCE MAJOR as Eric Minard…just take a look at Adam’s IMDb page!). And Adam did the music for the three of the previous four Avalon films: LEGACY, AIR AND DARKNESS, and Cosmic Stream. Adam composes great music and does it amazingly quickly. You definitely want him on your fan film team!

Switching over to the front of the camera, there’s some familiar faces that you’ll see in upcoming Avalon projects and some new faces, as well—each of whom is bringing an excitement and enthusiasm to their role. You’ve got experienced actors like WARREN HAWK (who will play Commodore Imari Jakande of the U.S.S. Excalibur) and TYLER DUNIVAN (returning as Captain Derek Mason, who was given command of the U.S.S. Excalibur in the first Avalon fan film GHOST SHIP and then died in the second episode AVALON LOST…or did he?).

Being a full-time mom, Ashley figured that her life path just wasn’t going to allow for any acting. Then, purely by coincidence, she did a good deed for a stranger in Tennessee who turned out to work in independent films and who cast her in a production he was working on in Florida, playing a leading role (a witch named Bessie). “Flying back to Arkansas,” says Ashley, “I knew my life would never be the same again, and I could not live without acting in my life. It put a burning flame in me that no one can extinguish…pure raw passion and expression.” Shortly thereafter, Ashley was cast by RAY TESI of NEUTRAL ZONE STUDIOS in Kingsland, GA for an upcoming Star Trek fan film that Josh Irwin was helping out on. Josh watched Ashley perform and asked if she’d like to appear in a fan film in her home state f Arkansas. Ashley jumped at the chance, and the rest is history. 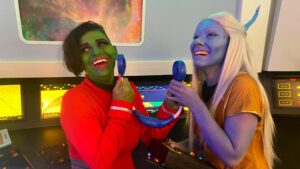 The other new face is a blue face belonging to REILLY PRINCIPE. Avalon will be her first time in front of the camera, but she’s been doing musical theatre since she was young. A close friend of Pixi Nereid, Reilly got her “big break” from Pixi just after Pixi got her big break from Josh. Pay it forward, they say! And Reilly says, “Everyone on the cast and crew is incredibly lovely to work with, and I am looking forward to filming more and becoming closer with everyone. I wouldn’t trade this experience for anything else!”

There’s a few final members of the team that deserve a few words. The first is longtime fan film fulcrum GLEN L. WOLFE. Glen has been a part of countless fan films both in front of and behind the camera stretching out for nearly a decade. He is currently the co-showrunner of the anthology fan series THE FEDERATION FILES, along with being the co-founder and co-builder of WARP 66 STUDIOS, the TOS sets where Avalon episodes are filmed in Arkansas (along with Neutral Zone Studios in Georgia). But Glen has a much more active role in Avalon film production than just unlocking the front door and turning on the lights. Glen acts as the 1st Assistant Director, keeping the wheels turning all day and making sure everything and everyone is on task . If the Director is Picard, the 1st AD is Riker. 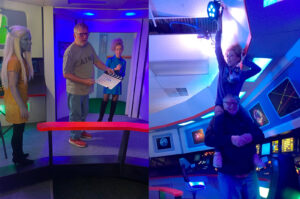 Glen Wolfe really carries this fan production on his shoulders.

AARON McNEAL is the Executive Producer. A pilot and veteran, Aaron is married to Pixi and really loves his wife. How do I know this? Well, growing up, Aaron was a “Star Wars kid.” Pixi was a “Star Trek kid.” And while some mixed marriages are a struggle, Pixi managed to talk her hubby into binge-watching EVERY Star Trek episode (of every series!) and movie in order…even the clunkers. But Aaron came to love all things Trek, and now he’s handling logistics for Avalon, coming up with ways to keep costs down, sourcing vendors for things like costumes, and figuring out who needs to be where and when…which is hugely important when you’ve got such a large team!

And last but not least is MATT FUJAN, who is serving as Producer. In short, he makes sure people get paid. “Wait, isn’t everyone a volunteer?” I’m not talking about those people. I’m talking food and catering, gas and other travel expenses, lodging, equipment rental, hair and make-up supplies, and a ton of other budget line items. When you’re crowd-funding tens of thousands of dollars (hopefully!), someone needs to keep track of what gets spent where and how much is left. That’s Matt’s job (along with Aaron). Matt has a long history of managing and organizing comic conventions, including founding his own pop culture convention. So he knows a lot about keeping proper books.

And there you have it—Team Avalon, ladies and gentlemen! And that’s Reason #3 to donate to this worthy GoFundMe campaign, which you can do right now by clicking here: