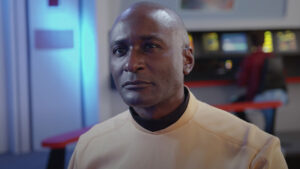 Over the next 21 days, I’m planning to provide one excellent reason each week to donate to the just-launched GoFundMe for the AVALON UNIVERSE‘s new series of Star Trek fan films, a multi-episode saga that will be titled “Crisis on Infinite Excaliburs.” The campaign had a soft launch last week and has already taken in over $1,200 in donations before most fans even knew it was happening! But today marks the official kick-off, and with it, my series of blogs.

Of course, if you don’t want to wait for me to convince you, feel free to click on over and donate something right now (and watch the “ask” video; it’s awesome!)…

I know, I know. It seems like lately there’s been a new Star Trek fan film crowd-funding campaign every month. And yep, there has! Back in May, CGI sensei SAMUEL COCKINGS raised more than $13K for his series of six (or is it seven?) anthology fan films under the canopy title of TREK SHORTS. Then in June, it was DREADNOUGHT DOMINION‘s turn, as GARY DAVIS successfully topped their $5K goal for two Dominion episodes plus the debut episode of their new PROJECT RUNABOUT fan series.

And as July begins, we go for the “hat trick” as JOSHUA IRWIN has just launched the most ambitious of these back-to-back-to-back campaigns, endeavoring to raise $20K for a new series of fan films set in the Avalon Universe.

There have already been six Avalon Universe fan films: GHOST SHIP, AVALON LOST, DEMONS, LEGACY, AIR AND DARKNESS, and NEW ORDERS…nearly two hours of super-high quality Star Trek fan films with a combined hundreds of thousands of views on YouTube. And a seventh film, COSMIC STREAM, is set to premiere later this month…with an eighth film, AGENT OF NEW WORLDS, already in production!

Believe it or not, Josh has only ever held ONE Avalon crowd-funding campaign before now…back in early 2019, he raised $6,500. All the rest of the production costs for Avalon—literally tens of thousands of dollars—have been paid for out of Josh’s pocket…and this guy ain’t exactly living the lifestyle of the rich and famous!

Joshua Irwin…spent his last pennies in the Avalon Universe!

Understandably, most fan filmmakers can only self-fund for so long before they need to ask for a little help from their friends…which is why many Star Trek fan productions seek support through crowd-funding. And indeed, that’s why I’m writing this blog (and the three weekly blogs that will follow): because Josh is my friend—along with being my Director of Photography and Editor on INTERLUDE. I’m also writing these blogs because I love the quality of Josh’s work, I love the Avalon Universe, and oh…

…BECAUSE JOSH IS BRINGING BACK CAPTAIN JAKANDE!!!

Yep, that’s the big Reason #1 to donate to this campaign!

For those of you who don’t know who Captain Jakande is, go and watch Interlude right now! But in short, Jakande was the captain of the ill-fated U.S.S. Artemis, who bravely sacrificed himself and his crew so that the U.S.S. Ares could get the critically-wounded Admiral Ramirez to safety. 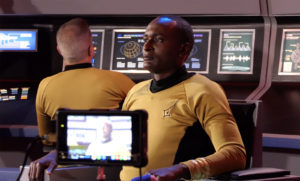 Jakande was played by actor WARREN HAWK, who was cast in the part just a few short days before our November 2, 2019 shoot at ARES STUDIOS in Lawrenceville, GA. After watching Warren work his tail off for 10 hours to turn in a stellar (and interstellar!) performance, and also getting to know him, I found myself wishing I hadn’t killed off his character!

It was bittersweet for Warren, too, because in addition to being an experienced actor, he’s also a total sci-fi geek. He loves Star Trek, idolizes Captain Sisko, and totally fell in love with the whole fan film experience.

And the fans fell in love with him, too! Jakande instantly became a fan-favorite character, and the praise for Warren’s performance can be seen in comments up and down the Interlude YouTube page.

Warren was itching to return to do another Star Trek fan film as Jakande, but the sad fact is that the Artemis did a pretty major KABLOOIE in Interlude! You don’t come back from a warp core breach, folks.

The great thing about the Avalon Universe is that it’s a PARALLEL Star Trek timeline that isn’t afraid to acknowledge that it’s an alternate reality. And that allows Josh and his team to play with canon, uniforms, ship design, you name it. And guess what? It also allows them to bring back characters from other Star Trek timelines because—wait for it!—maybe they never died in the Avalon Universe.

In other words, at least in the Avalon Universe, JAKANDE LIVES!!! 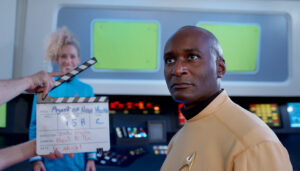 When Josh first asked me for my “permission” for him to use Jakande in an upcoming Avalon episode, I laughed. “Don’t ask ME!” I said. “Ask Warren Hawk. He’s Jakande.”

“But you created the character,” Josh reminded me. Well, that’s true, but I also killed him off. It’s not like I’m gonna need Jakande for anything in the future. Not only was I happy to give Josh my blessing to use Jakande, I was ecstatic about it! I totally wanna see Warren in the center seat again, dressed in a gold tunic, barking orders in that velvet baritone voice of his.

In fact, Josh actually asked me to write up a character background and profile for Jakande—where he is from (Nairobi, Kenya), why he decided to enter Starfleet, and just what kind of a person and what kind of a captain he is (serious like Sisko and Picard or more approachable like Kirk or Anson Mount’s Pike?). I’d never put those thoughts down on paper for Interlude, but now with Jakande as a lead character in Avalon, those character notes became essential. And Josh insisted that I should be the one to flesh out Jakande for the Avalon Universe.

Now the only question was: would Warren want to do it? After all, he lives in Georgia, and Josh and the main Avalon sets (at WARP 66 STUDIOS) are in Arkansas. That’s quite a schlep! But not only was Warren game, he felt downright euphoric to get a chance to play Jakande again…and to survive this time!

Initially, Jakande’s role was going to be somewhat small—just a flashback story to the Four Years War in the Avalon Universe, filmed close to Warren’s home in the Atlanta area at ARES STUDIOS in Lawrenceville, GA. But the episode would see Jakande surviving that war, with the potential for him to also cameo in later Avalon stories as a commodore or admiral 20 years later.

However, Josh was recently informed by actor  CHUCK MERÉ, who plays Captain Lance Ramirez of the U.S.S. Excalibur in the Avalon Universe, that Chuck was no longer interested in continuing in the role long-term. Hey, stuff happens, and actors move on. (Denise Crosby, anyone?) But amusingly, literally while Josh was having this phone conversation with Chuck, Warren Hawk called and left a voicemail, eager to discuss plans for his role and scheduling. Divine messages from the Universe don’t get more obvious than that, folks! So Josh called Warren back to ask if he’d like a more significant presence in Avalon going forward…as the new captain of the U.S.S. Excalibur! Warren was exuberant. (Geez—ecstatic, euphoric, exuberant—I am totally using up my allotment of “e” adjectives today!)

In fact, during a recent shoot in Arkansas, Warren recorded this heartfelt (and hilarious!) plea for fans to donate to the new Avalon crowd-funding campaign…

Because there’s still a chance of shooting an “exit” story for Captain Ramirez, Josh has decided to jump forward two and a half years to tell the next chapter in the Avalon saga: a multi-film story he’ll be calling “Crisis on Infinite Excaliburs.” Commodore Jakande will be the new commanding officer with a brand new crew…including a fresh, young first officer played by PIXI NEREID. Pixi is the #2 reason you should donate to the Avalon crowd-funder (even though she’s playing Jakande’s number one).

Come back next week to find out who Pixi Nereid is and why she’s gonna make you want to back this awesome project! But if you’re already convinced, feel free to donate right now by clicking here…