Fan Film Wednesday – Reason #2 to donate to the AVALON GoFundMe: DO IT FOR PIXI…! 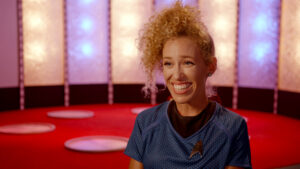 If you’ve never been part of the making of a fan film, it’s kinda hard to explain. But there’s a bug that bites ya, and then there’s an itch that you just need to scratch. It’s difficult to say when exactly that fan film bug bites—I guess it’s different for everyone; like the moment someone realizes they’re a Trekkie/Trekker—but when it does, everything can change in a heartbeat.

Or not. Some people make a fan film or participate in a production or two and they’re done. And that’s fine. But for many others, fan films get into your blood—sometimes into your very DNA—and then there’s just no stoppin’ it!

Which brings us to PIXI NEREID.

That’s actually her stage name. Pixi’s real name is ILIA McNEIL…and yes, the “Ilia” is actually inspired by the bald Deltan navigation officer from Star Trek: The Motion Picture, as her parents were TOS fans. And Ilia is a hardcore fan herself. But all of her friends call her Pixi, and so do I because Pixi has (almost overnight!) become a friend.

And honestly, it’s hard not to absorb all of the positivity, fun, and optimism that radiates from her—so much so that you almost need to call her Pixi. And if you’re wondering where that name comes from, Pixi has a side gig (along with a small number of other women in the Fayetteville, Arkansas area) performing as a mermaid at children’s parties. So I suppose that Pixi Nereid isn’t her “stage” name so much as her “pool” name, but whatever you call it, she’s totally a Pixi! 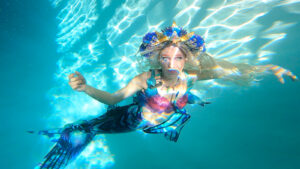 JOSHUA IRWIN, who will be directing the new AVALON UNIVERSE fan films that are crowd-funding now (click here to donate), first met Pixi on the set of the soon-to-be-released COSMIC STREAM while filming at WARP 66 STUDIOS in northeastern Arkansas. Pixi was told about the shoot by one of her fellow mermaids, who had a role in the fan film. But Pixi didn’t come to appear on camera, she just wanted to help out. In fact, she arrived and immediately told Josh that she’d be happy to be a grip for the day (a grip is someone someone who moves the lights around…not very glamorous but super-important).

It’s a 108-mile drive each way from Fayetteville to the studio, so the people who volunteer for these fan film shoots at WARP 66 have to be pretty committed. After the shoot in mid-March, Josh posted the following photo and comment to Facebook… 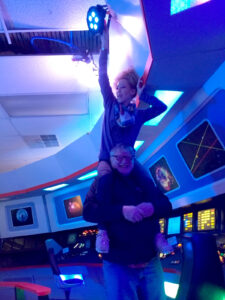 In filmmaking, the one thing that matters to me more than anything is attitude, humility. Pixi showed up on our set…as a lighting technician. She didn’t ask anyone to pay attention to her. She showed up with bright energy and a genuine, infectious smile, and put on a clinic in being sincerely humble, open, and willing to help in any way possible. But in the moments she might have thought I wasn’t looking, I saw flashes of greatnesses out of the corner of my eye that I just couldn’t ignore. She had managed to make a statement by just being there. Pixi, I look forward to doing amazing things with you, before you’re too busy being seriously famous.

It wouldn’t take long for Josh’s prediction/wish to come true. Pixi came to a table read for another Avalon shoot, and when one of the actors didn’t show up, Pixi sat there with a copy of the script and read the lines of that character…and she rocked it. Unlike a number of the folks who appear in Avalon films, Pixi is not an actor by trade. In fact, she’s getting her Masters of Public Administration at the moment at a school that has a concurrent JD program starting in 2022. Her ultimate goal is to become an attorney specializing in entertainment law. But Pixi has done some theater, and Josh decided to offer her a part in AGENT OF NEW WORLDS, a new Avalon fan film he was about to shoot starring two female characters. Pixi would share the lead role.

Pixi was jubilant! She had absolutely 100% been bitten by the fan film bug…so much so that she was actually willing to drive all the way out to Phoenix (1,200 miles from Fayetteville!) to film a series of eerily beautiful scenes in the Arizona desert. Josh was taking advantage of another professional shoot he was going on to grab Avalon footage in a location where he would not normally be able to shoot. 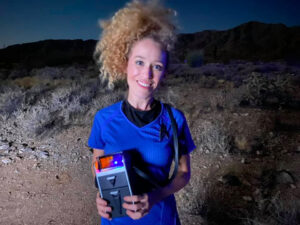 Unfortunately, an issue came up while the production team was in Arizona, and not only could Josh not finish the shoot, but he ended up having to cover all of the travel expenses out of pocket. More location footage still needed to be filmed, but now there was literally no money left to do anything. Josh had been funding Avalon out of his own pocket for the last couple of years…to the tune of tens of thousands of dollars. But now it was time to pay the rent and feed the family.

And that, as they say, was that. Agent of New Worlds would need to be put on hold…possibly indefinitely.

But Pixi decided that she was NOT going to let this project go quite so gentle into that good night! She and her husband Aaron offered to cover the remaining costs to complete this fan film.

This was no small donation, mind you! Pixi and her spouse aren’t exactly in “the one percent,” and this is a significant outlay for them. But Pixi wanted to see this project completed…and not just because she wanted to watch herself on YouTube galavanting across an alien planet in a teal sciences outfit. Pixi wanted to see Josh complete his passion project and present it to Star Trek and Avalon fans.

However, Pixi isn’t simply looking to appear in the upcoming episodes; she has offered to PRODUCE them. And lest you think the producer is simply the person with the money, that’s not the case at all! Pixi is going to be the wind beneath Josh’s wings as she helps him lead a team that will handle all of the minutiae that Josh needs covered in order for him to do what he does best: direct and shoot a film.

Having been a producer myself on INTERLUDE (with Josh as my director of photography), I can attest that producing a film is super-demanding, time-intensive, and requires one to wear many hats. But already, Pixi has leapt into action, helping Josh assemble a much more extensive production team than he’s had previously to handle not just the fun creative stuff but also the challenging logistical and financial stuff. There’s scheduling, call sheets, paying for things like equipment rental and reimbursing cast and crew expenses for food and gas…plus a host of other details that most people never even bother thinking about when they watch a movie. But a producer has to sweat every one of those details or else the entire house of cards can come tumbling down.

In many ways, Pixi has now joined Josh in becoming the new Avalon co-showrunner, and she’s off to an amazing start. Heck, she even roped ME in to help them! Less than a week after I offered to advise them on crowd-funding strategies, Pixi sent me an invitation to sit in on a Zoom conference call for “Team Avalon” to discuss the project. (So I guess I’m on Team Avalon, huh? Actually, the first few line items listed me as providing information!) Pixi led the Zoom calls, keeping us focused and on schedule. 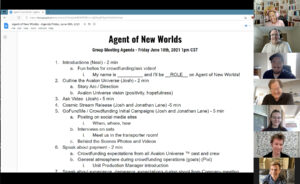 The kick-off call ended with a promise that Pixi’s husband Aaron would set up a Slack productivity app account where the cast and crew could collaborate and keep documents like scripts, budgets, schedules, marketing ideas, photos, graphics, and other resources. And Pixi told us that she’d have a recording of the call posted later in the day for anyone who wasn’t able to attend.

To give you an idea of why I’m so impressed with Pixi, listen to the following audio message that she sent a few hours later to the team’s Facebook chat group. Pixi recorded it while driving in her car, so please forgive the background noise. But this, my friends, is what a showrunner should sound like…

Producing can often feel like herding cats and putting out endless unexpected fires. But just like an effective manager in any business venture, part of the job is projecting positivity and optimism. Keep your team upbeat and motivated, and they’ll always give you their best. And that is why Avalon is in such great hands…and reason #2 why you should want to donate to this project (reason #1 is the return of Captain Jakande!). Here’s a recently-released video spotlighting Pixi and her perky personality…

Welcome to the fan film community, Pixi. We’re looking forward to seeing some great things from you!